Two Keystone of Boston dollhouses that look enough alike to be sisters,
or brothers, or sister and brother. If they are "sisters",
then we know that the one on the right is the "prettier sister".
No jealousy here however because I think
the house on the left has a rather masculine look.
Both dollhouses are a product of the 1930s.  I have a 1937
W. Bingham Co. catalog that shows the "plain" sister on the left.

Both houses originally came with two rooms, upper floor and lower floor.
Since they came to live in my dollhouse village,
they have managed to acquire two new rooms each! 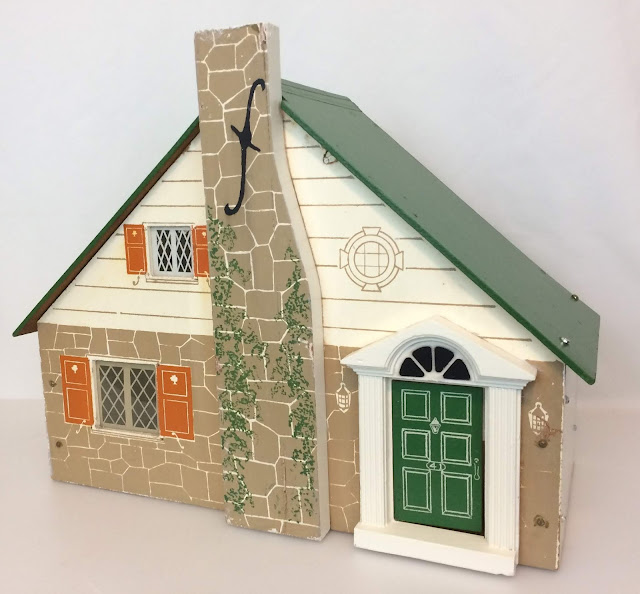 The pretty sister has plastic windows and painted on shutters,
with a tall chimney in the center of the house.
It is the home of Grandmother Specht. 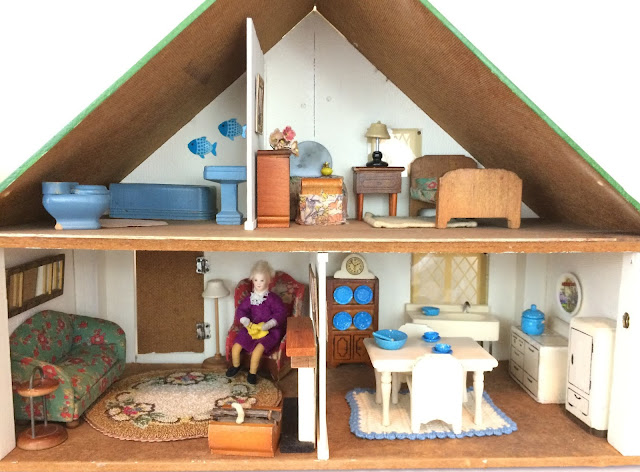 Grandmother Specht turned it into a cozy little home,
with furniture and kitchen appliances from Kage
and bathroom fixtures from Strombecker. 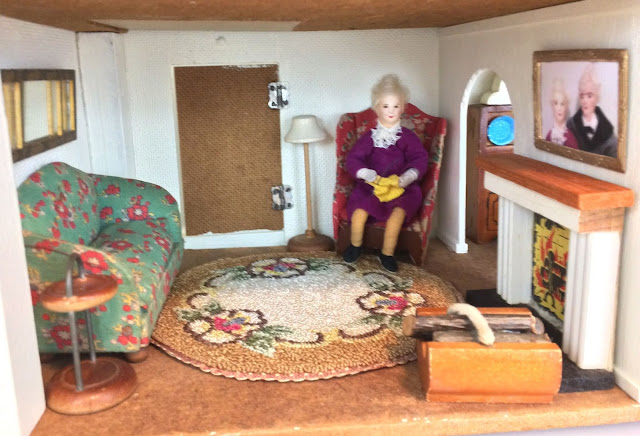 She likes to sit in her comfy chair and knit sweaters
for the homeless veterans living on our streets. 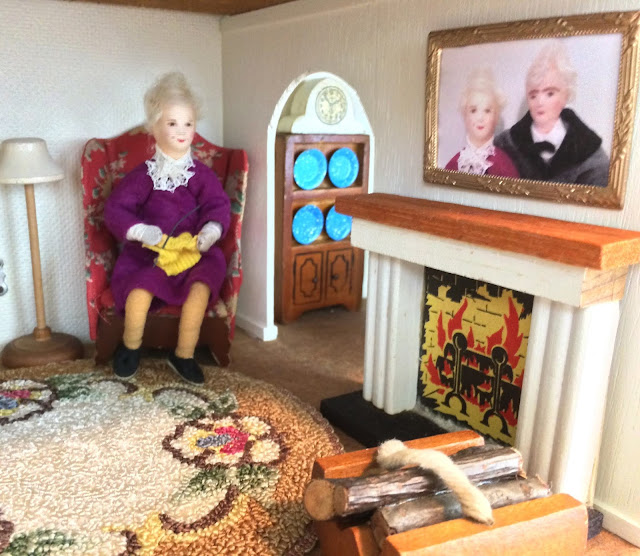 Over the mantel she has a picture of herself
with her late husband, Mr. Specht..... 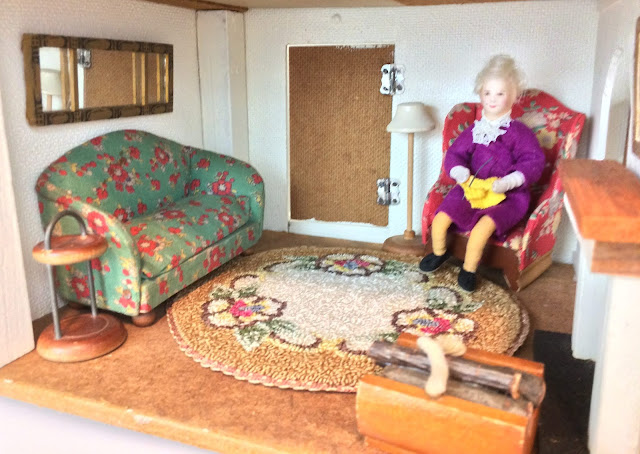 ....and over the sofa is her mother's cherished Tynietoy mirror. 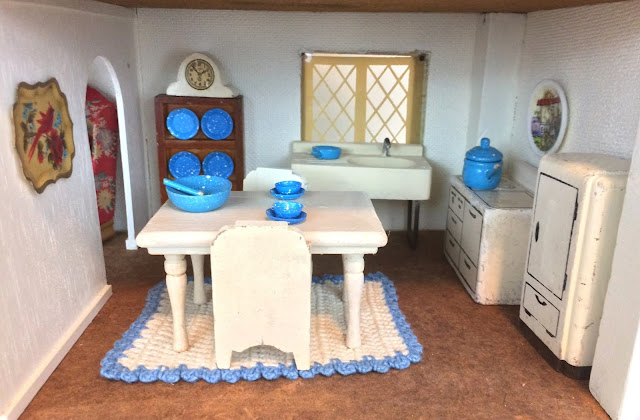 Grandmother Specht likes her blue and white kitchen
with her mother's painted tray hanging on the wall. 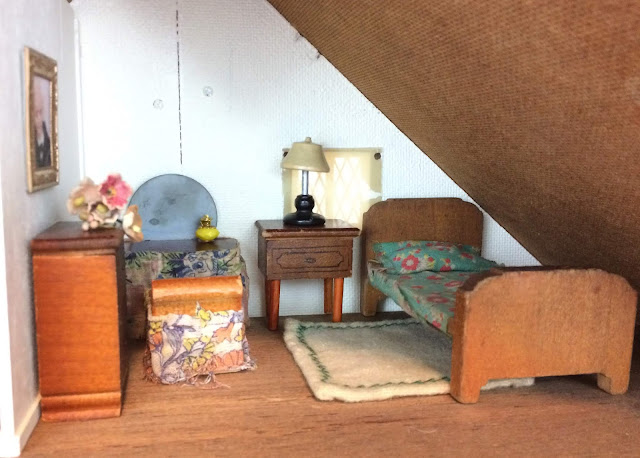 Seeing her single bed makes her feel lonely
for her late husband... 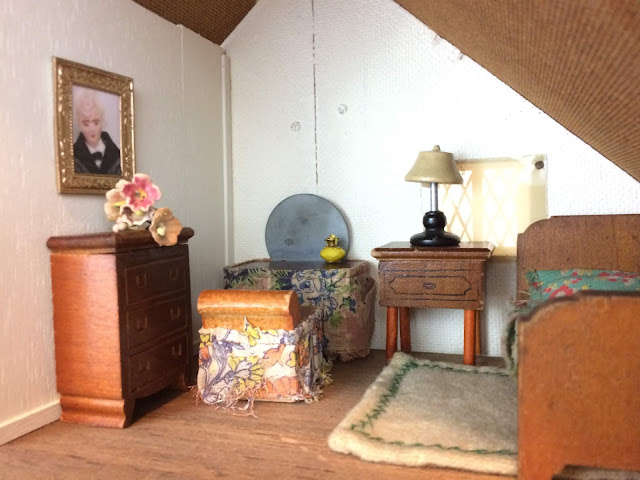 ...so she keeps a picture of Mr. Specht
hanging over a chest in her bedroom. 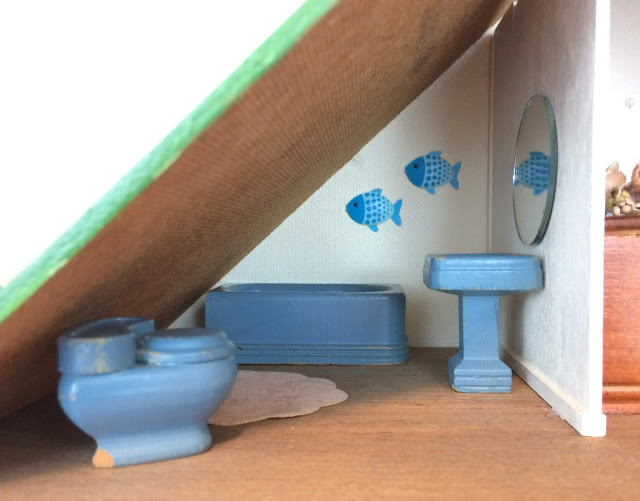 Blue bathroom fixtures! I do think she likes the color blue. 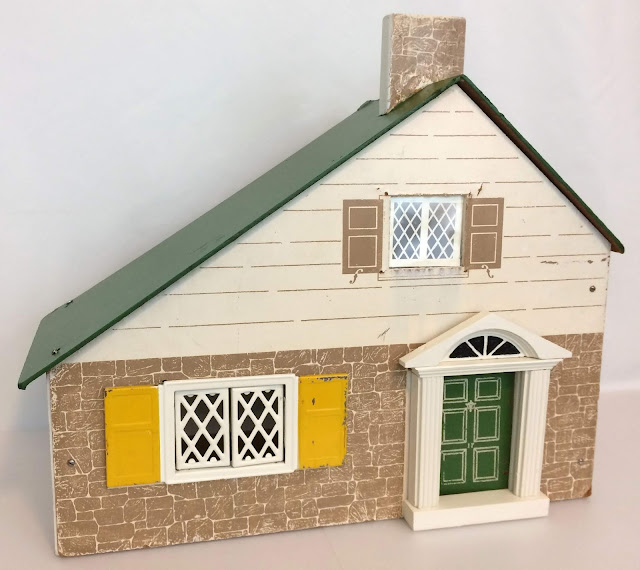 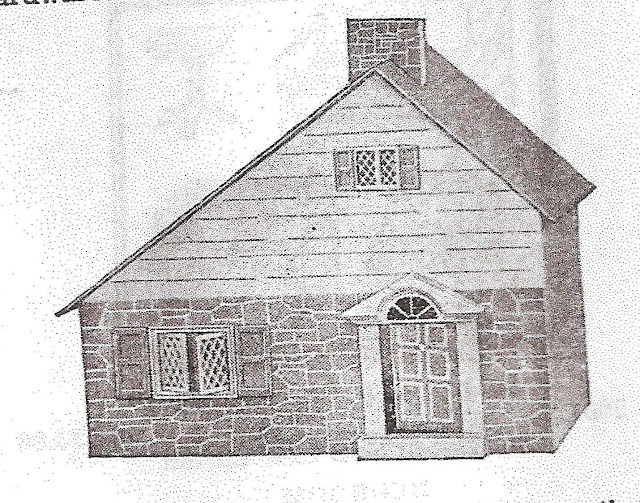 ...so it doesn't exactly match this picture from the catalog,
or the door surround on the pretty sister. 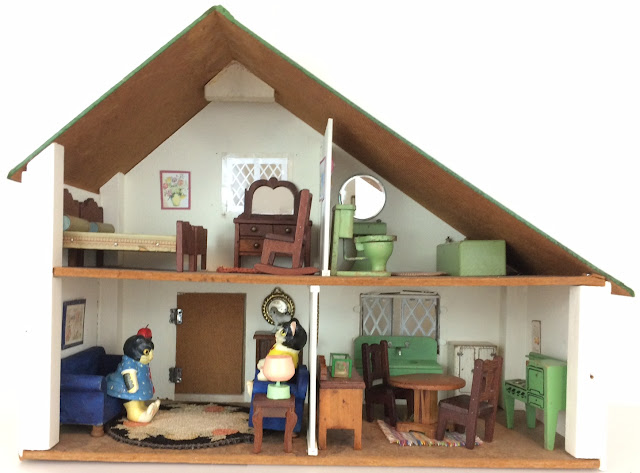 This is the home of Tom and Kitty Katz.
They have furnished their home
with Realy Truly furniture made by Converse
and Schoenhut kitchen appliances and bathroom fixtures. 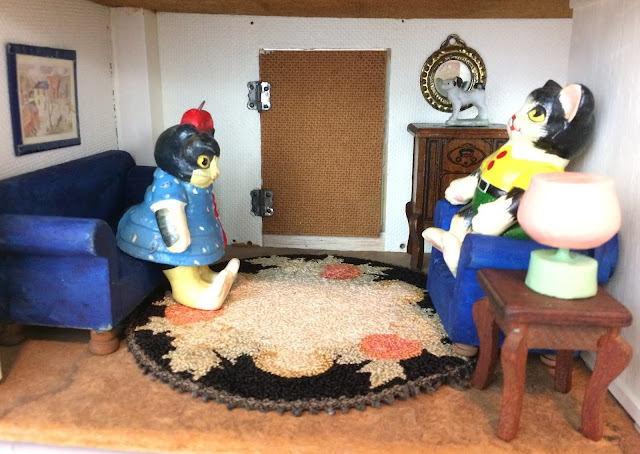 That is not an apple on Kitty's head. 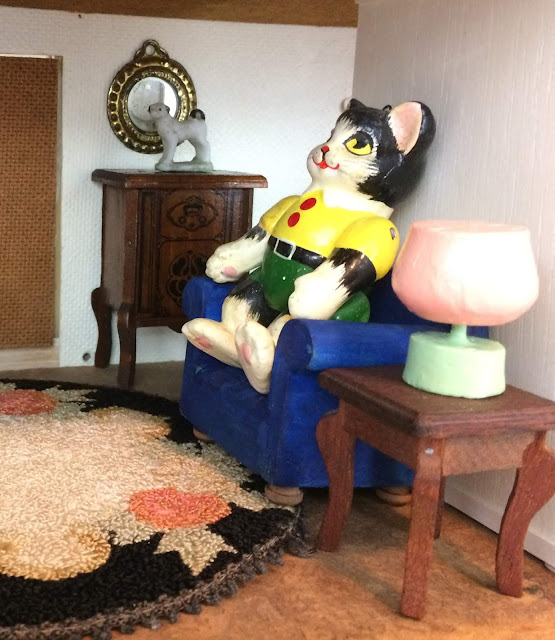 Tom Katz likes to sit in his chair and think about the days
he used to tease the dogs in the neighborhood...from the top of a fence.
There is a statue of his favorite "pal" on the radio. 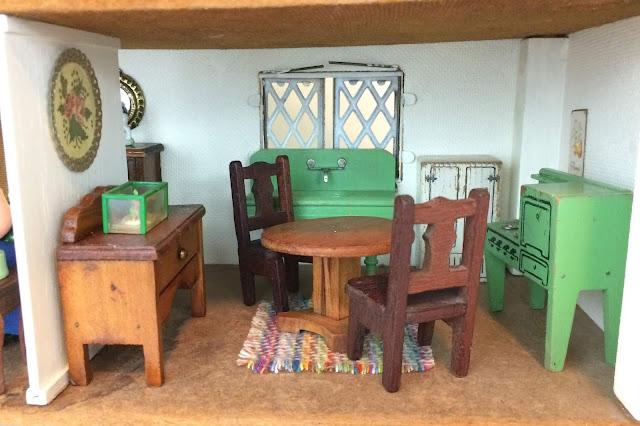 Kitty didn't look to happy in the living room....
guess that's why nothing is cooking in the kitchen. 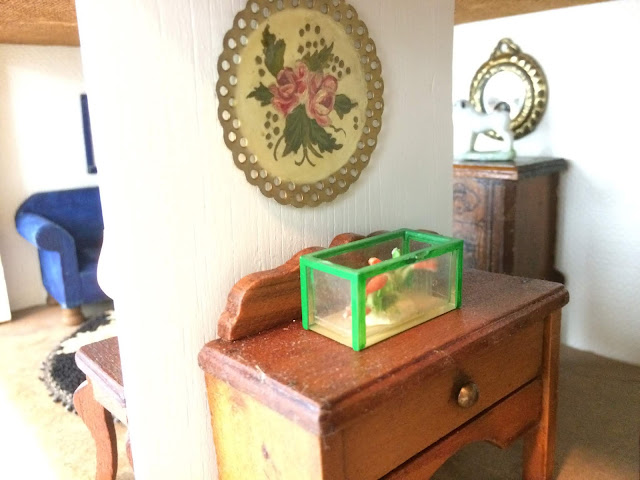 They do keep a bowl of snacks on the kitchen buffet. 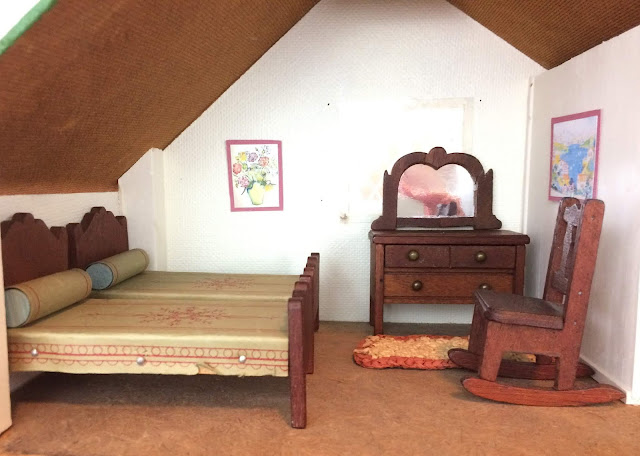 Sometimes they sleep under the bed...or on top of the dresser. 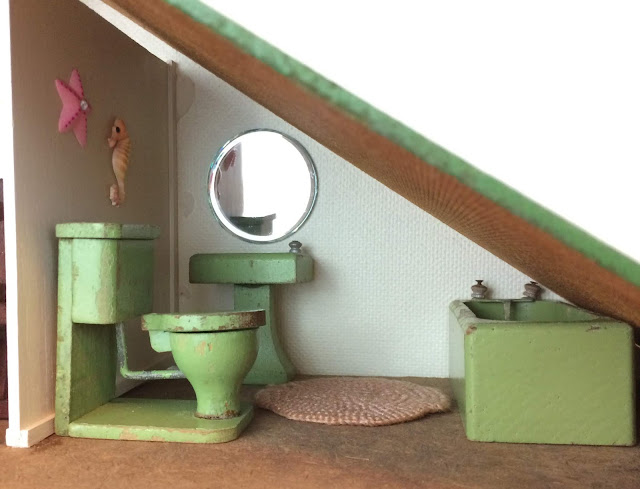 Tom wanted a litter box in the bathroom,
but Kitty put her paw down and told him a firm NO! 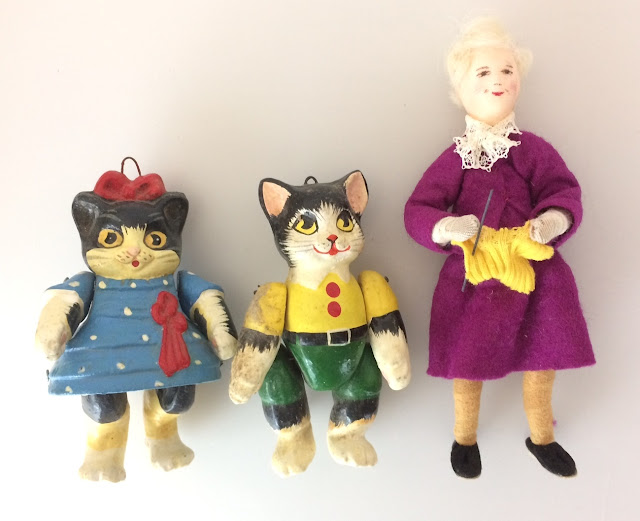 Kitty and Tom Katz are made of plaster. Looking at the wires coming out of the top of their heads, they are either ornaments or aliens from another planet.
Grandmother Specht is a small Ermey doll from Germany.
Posted by Florine at 3:54 PM