A bit of silliness... 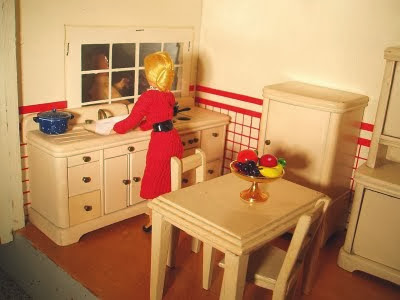 Karen Wagner cleans up the kitchen while her hubby Doug smokes an after-dinner stogey on the veranda. She is trying to figure out how to add a dishwasher to her tiny kitchen.... 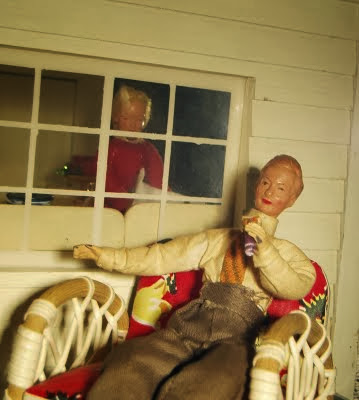 Doug enjoys his stogey while thinking about his single days before he met Karen. He wonders what happened to that cute little blonde he dated while working in Canada. The last he heard she had married and was living in one of Susan's Mini Homes with her hubby and kids. Boy could she put away the vino! 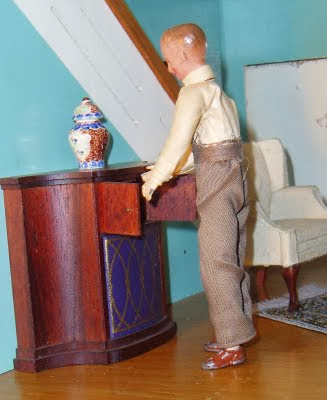 Stogey finished, Doug pops his favorite Art Porter CD into the player...a little mood music, he hopes! He yells at Karen to fix some martinis when she finishes in the kitchen..... 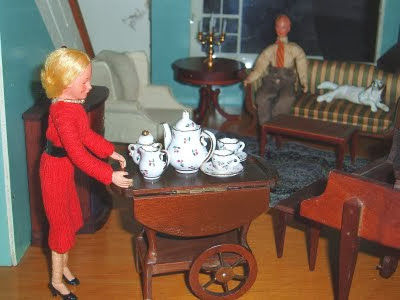 Karen wheels the coffee into the parlor.
Doug: "What happened to the martinis, Karrie-baby?"
Karen: "Oh, Douglas, I thought you would enjoy coffee more. I'll play some showtunes for you while you have your coffee! Off the davenport, Miss Sallie!" 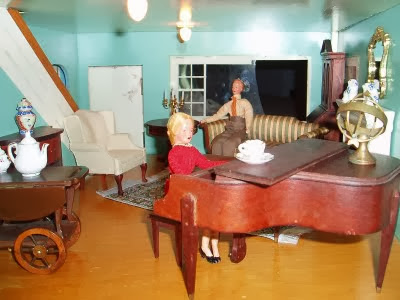 Karen thinking: I wish he would fix that window. There is such a draft on my legs when I play. I really would like to re-decorate this room with a modern flair. Oh, did I miss a note there? Not to worry, Douglas is probably not even listening. I wonder if we could get Oese to come from Germany---I love what she does in her little houses! I would have to watch her closely, however, in case she wanted to put one of those scratchy sponge sofas in here! If I could get Louise to invite us out for a weekend visit to stay at her Welsh Princess cottage with that romantic 4 poster bed...umn....maybe I could convince Douglas to pay to bring Oese here! 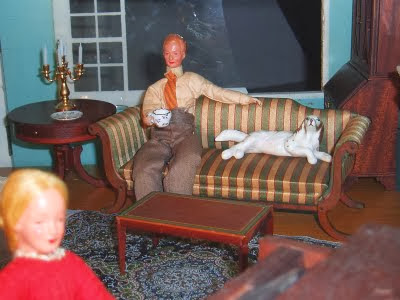 Doug thinking: Coffee and showtunes. What a way to spend Saturday nite! Umn, too bad I let that party girl Dianne get away. She married that young Mike Praeger and moved back to Australia. Last time I saw her on the net, she was living in one of Rebecca's homes and still lookin' good! Wonder where that draft is coming from? 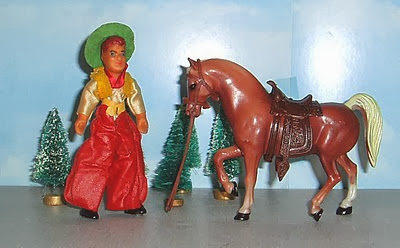 
HOWDY!! My name is Melvin Flagg. I'm a cowboy and I ride 'n rope in Texas.

My hostess juss been showin' me a pikshur of a real cute li'l filly livin' up in Canada (they have us cowboys there too). Not too sure, but my hostess might be tryin' to git me to move on. Last munth it were this purty little gal name of Christine that lives way over in Germany with Mz Puppilottchen.... but, heck, I cudn't ride my best friend Buckshot all the way over to Ger-man-y! Gol-ly!

Anyways, this purty li'l filly an her yungun Patsy be in computishun to get to live in a really big hacienda.... plenty room for a REAL man there, too. Purty li'l Mrs. Flagg might be needin' a man to take care of her and that big ole house, know what I mean?

So friend, what I'm a askin' you to do is to go on over to Susan's Mini Homes and cast yur vote for that cute li'l Mrs. Flagg to git to live in that big ole house of Susan's. Ifen she wins, I just might pack my saddle bags, jump on ole Buckshot and mosey on up north to check them fillys out! I do thank ya, pardner, I do thank ya very much!

Hey! Did ya see my girl cusin at Smallstuff's place? She's English. Wernt she all gussied up and lookin' purty in her maid outfit? Must work fer some big im-por-tant Duke or sumthin'. Good looks do run in our family, don't it?

Gol-ly, now I jus seen my fancy cusins, Cal and Bob Flagg, livin it up at Amy's! Oooh boy, all them weapuns! Heavy duty stuff! Never could lern them boys anythang 'bout shootin'. And drinkin licker! Sum un better warn Miss Amy before thay cause big trouble! Can ya hear me Miss Amy? WATCH OUT for them boys when they be drinkin that licker! 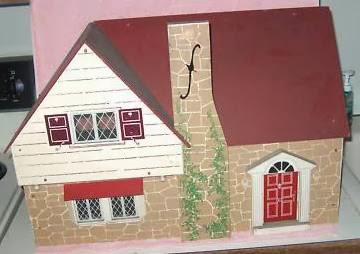 Barclay, a Keystone of Boston dollhouse, met his demise late July in the state of Pennsylvania. Ron S., his previous owner, states that Barclay was "absolutely destroyed" at the Pittsburgh bulk package sorting plant of the United States Postal Service. 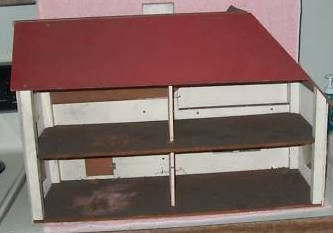 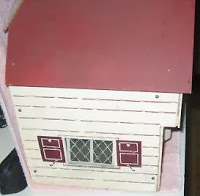 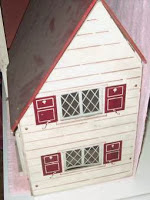 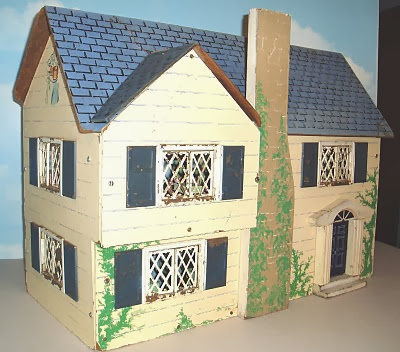 When interviewed HUD told us, “I was hoping to have a place for him right next to me on the shelf. Man, he would have made me look my age, but family is family. I didn’t even get a chance to meet him”.

There might be a small controversy over Barclay's parentage, as some might think he belonged to the Rich Toys family. And looking at Barclay, one could question if there was a little “hanky-panky” going on. The Rich Toys family produced dollhouses with similar chimneys,  red pediments over the windows, and the plastic windows which are unusual for a Keystone family member. The main characteristic that points to Barclay being a member of the Keystone family is  the supporting frame inside the house as opposed to the metal L-shaped support brackets that most of the Rich Toys family members have.  Uh, and also, his fraternal twin is pictured on page 149 of Zillner and Cooper's Antique and Collectible Dollhouses and Their Furnishings and attributed to Keystone, plus a similar house is shown in the 1938-39 Keystone catalog. And then there is his uncanny resemblance to our man HUD. ;)

Rest in peace, Barclay. Maybe we will discover one of your brothers one day. If we do, we will certainly invite him to live at the Village.
Some of the houses built by Rich Toys were given names....Avon, Birchwood, Berkshire. I am not aware that Keystone of Boston named any of their houses....I thought Barclay suited this little house that never made it to live with his new-found family.
Villa Hogarin re-do     from  Thursday, January 14, 2010 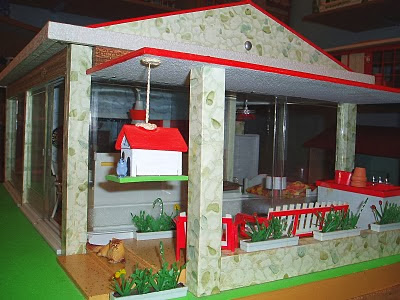 El gato likes to sun himself on the veranda, right under the bird house, of course. The porch set and the potting sink are both Hogarin/Modisa products. 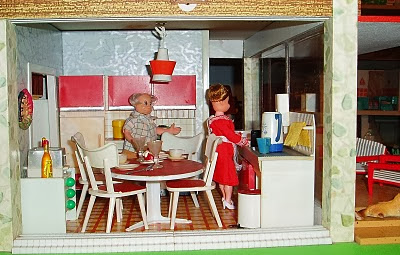 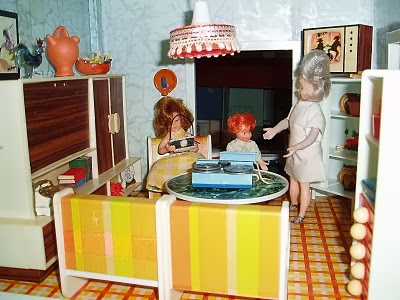 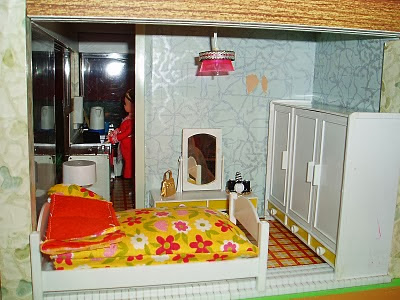 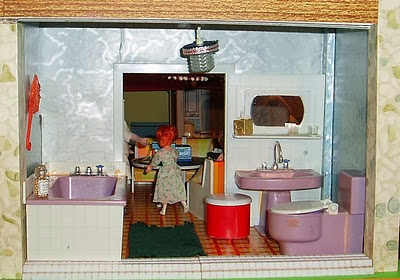 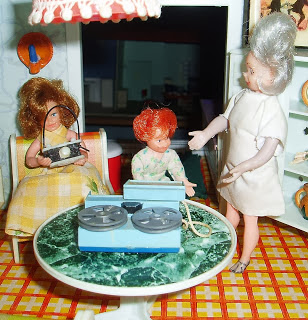 Abuelita Rigoberta is asking little Rocio to sing her favorite song, "Wow Wow Wubsy" so she can record Rocio on her reel-to-reel tape-recorder (from the same era as Abuelita's boufant hairdo). 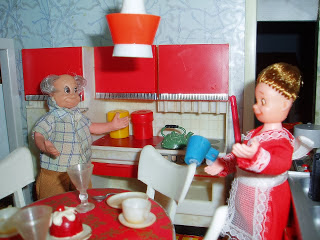 Consuela has decided to have a cup of coffee and visit with Senor Felipe. 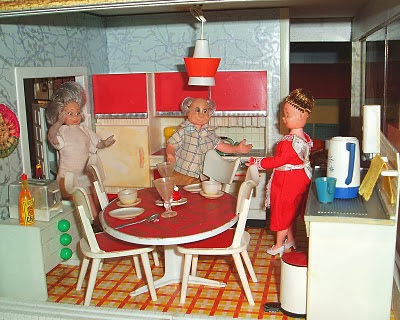 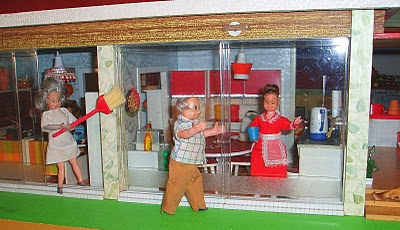 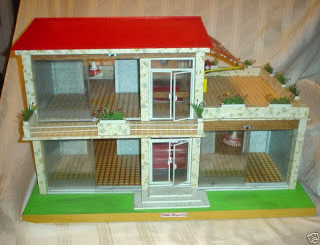 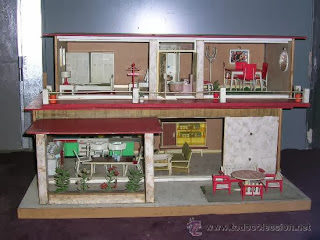 This one was labeled Casa Hogar.