Recently, Troy, the author of  the delightful and informative Tulsa Tiny Stuff blog, had a post that included a picture of two metal chairs that I was able to identify for him....I told him I would post  pictures of the pieces I had. Ok, not so recent since it was back on March 27, but to a retiree, recent can be anytime from the date of retirement to the present day!
.....and, if I had been reading my favorite blogs on a regular basis, I would have discovered that Call of the Small has a set of the chairs in green and uses them with the round table! As always, she has some unique creations in this particular post headed Contact. 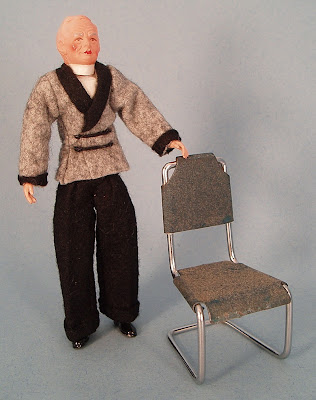 Troy's chairs were green and still sueded....mine are blue and no longer have the suede finish. That's Peter Pavlicek, a 6" Caco, displaying one of my chairs for your viewing pleasure. 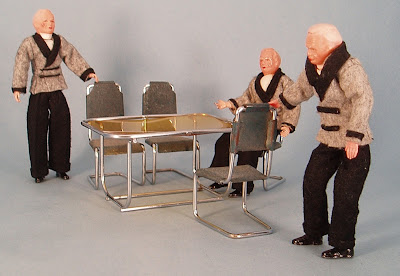 Here we find Peter, Paul and Marty Pavlicek grouped around the table to this set...they must have just gotten up from their afternoon naps. Not sure if Marty is going to make it to the table or not... 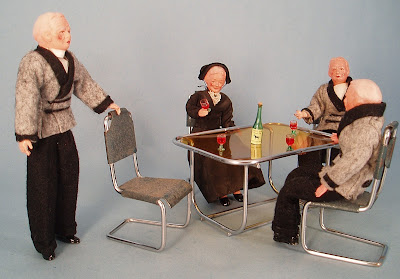 Looks like their friend  Charlotte has joined them....bringing 4 glasses and a bottle of Saint Emilion's Chevel Noir 1992....don't ask me, it's dollhouse wine. The afternoon is warm, the wine is good, and they reminisce about their youth. Paul has the great idea to have a gathering of all their friends from the days when they were young and carefree and lived life to the fullest. Charlotte says she will send out invitations...they don't use cell phones.

Charlotte had trouble finding some of their friends, but the Pavliceks think they have a nice turnout. They decided that it would be a good idea to have a nurse present.... 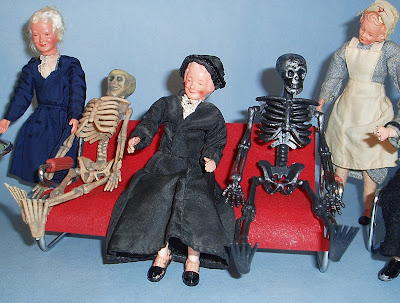 Charlotte is delighted to find herself sitting between two of her old beaus, Frank Joubert and Arthur Boyd. 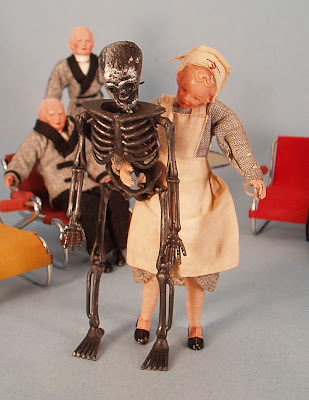 When it is time to go, Nurse Bellamy kindly assists Arthur  from the room.

Peter tells Paul how much he has enjoyed seeing his old friends from their days of wine and roses. Marty says, "What? There are roses in the wine?" 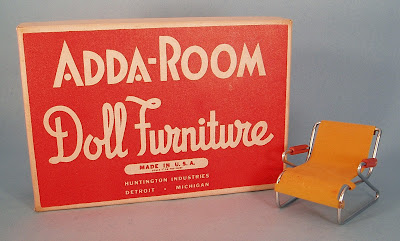 The living room set came to me in this box marked Huntington Industries, Detroit, Michigan, and still has the sueded finish. The table and chair set looks to be made by this same manufacturer. A friend that has collected dollhouses for many years told me he saw a bedroom set made by this company in the early 60s...not sure if he saw it in the 60s or that it was made in the 60s.

I think it is rather unique.... 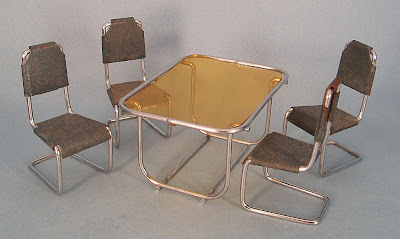 The table set reminds me of sets from the early 50s.

I've tried it in a modern dollhouse....
but for now it still resides in a box.