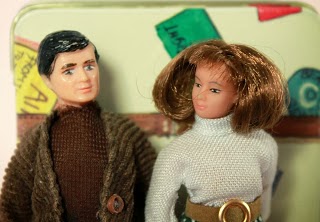 Christine and Hans-Herman Anderson  left their home in Minden, Germany and immigrated to Texas .... the US state with the most embarrassing politicians.

The Andersons were residents of Püppilottchen’s Toy Blog . They decided to sell their Lundby Stockholm villa and move to Texas where Hans-Herman will be setting up his pediatric practice. Here you can read the story of how they met and fell in love. 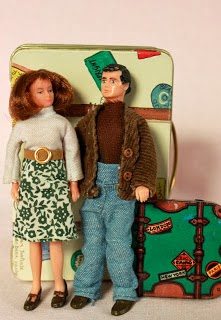 Since they are making this a permanent move, they brought lots of luggage. 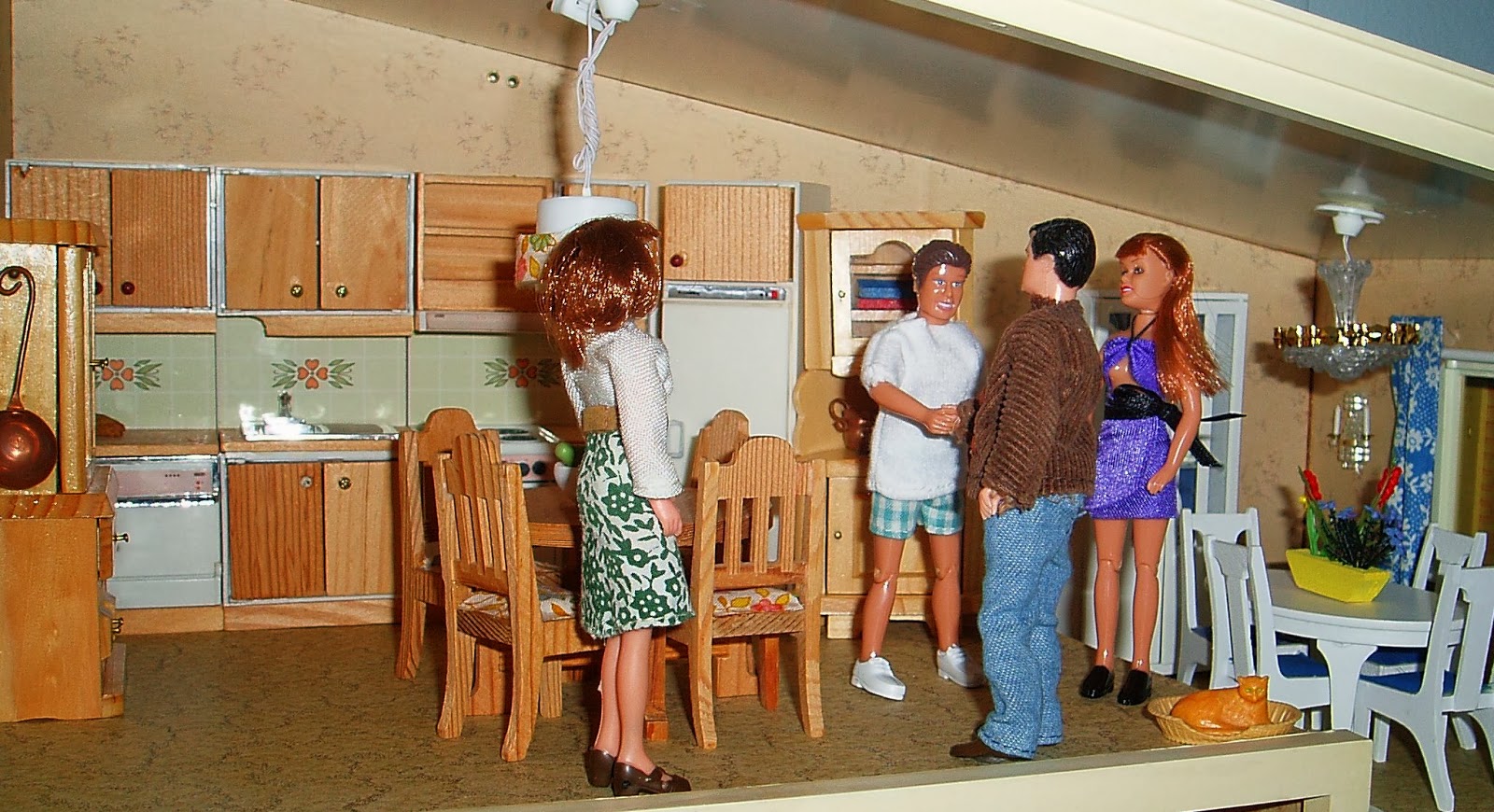 The appointment with their realtor, Chantelle Seller, is at her home. Christine and Hans are thinking that Texans dress very casually....but they both agree that she has a very nice home. Chantelle introduces them to her husband Chip. 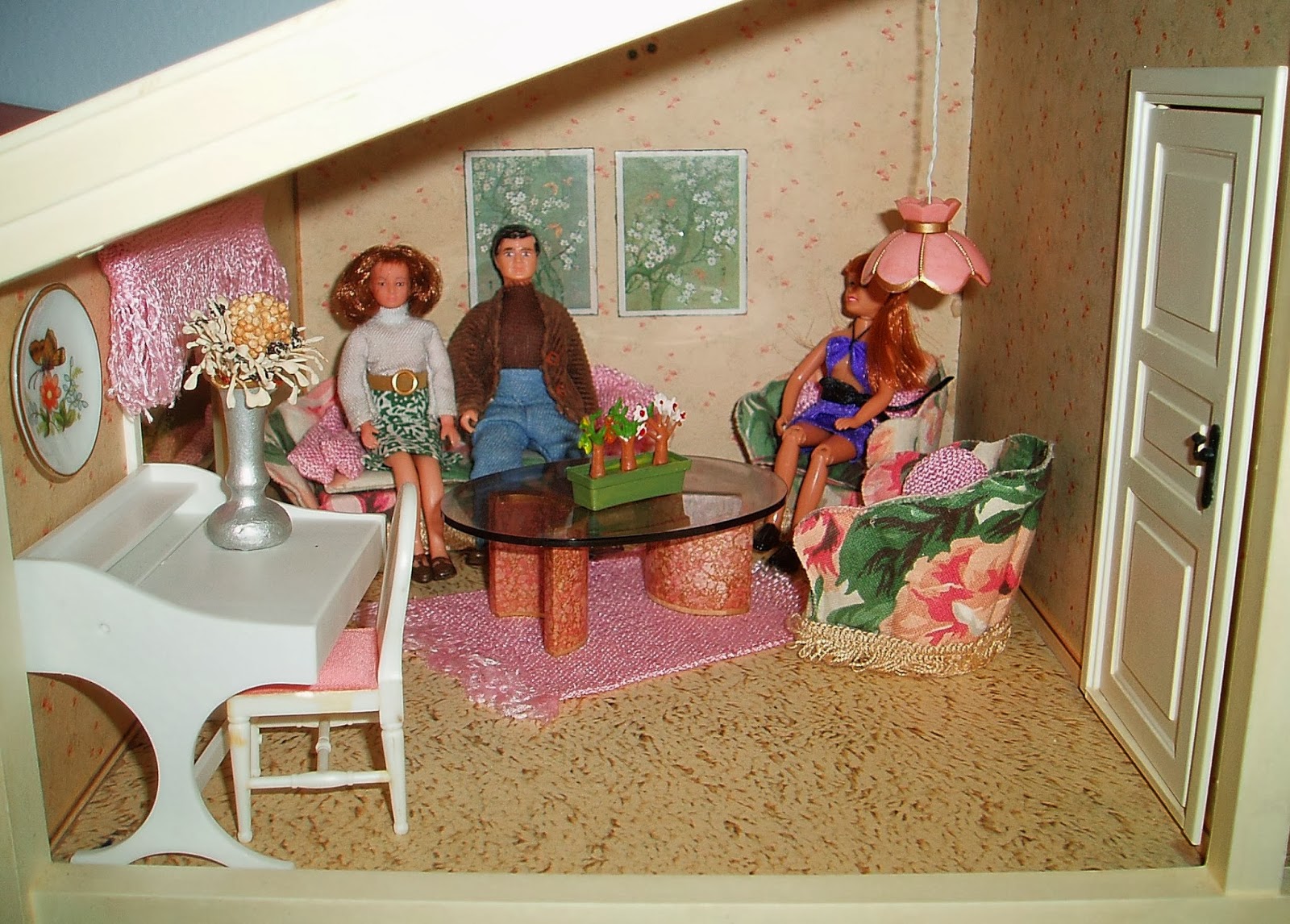 Chantelle has found them a very nice rental that is fully furnished, and hopes they like modern houses. This home, she tells them, was built by Brio in 1966. The Andersons are thinking they should have rested after arriving this morning....they have a feeling they look like zombies. 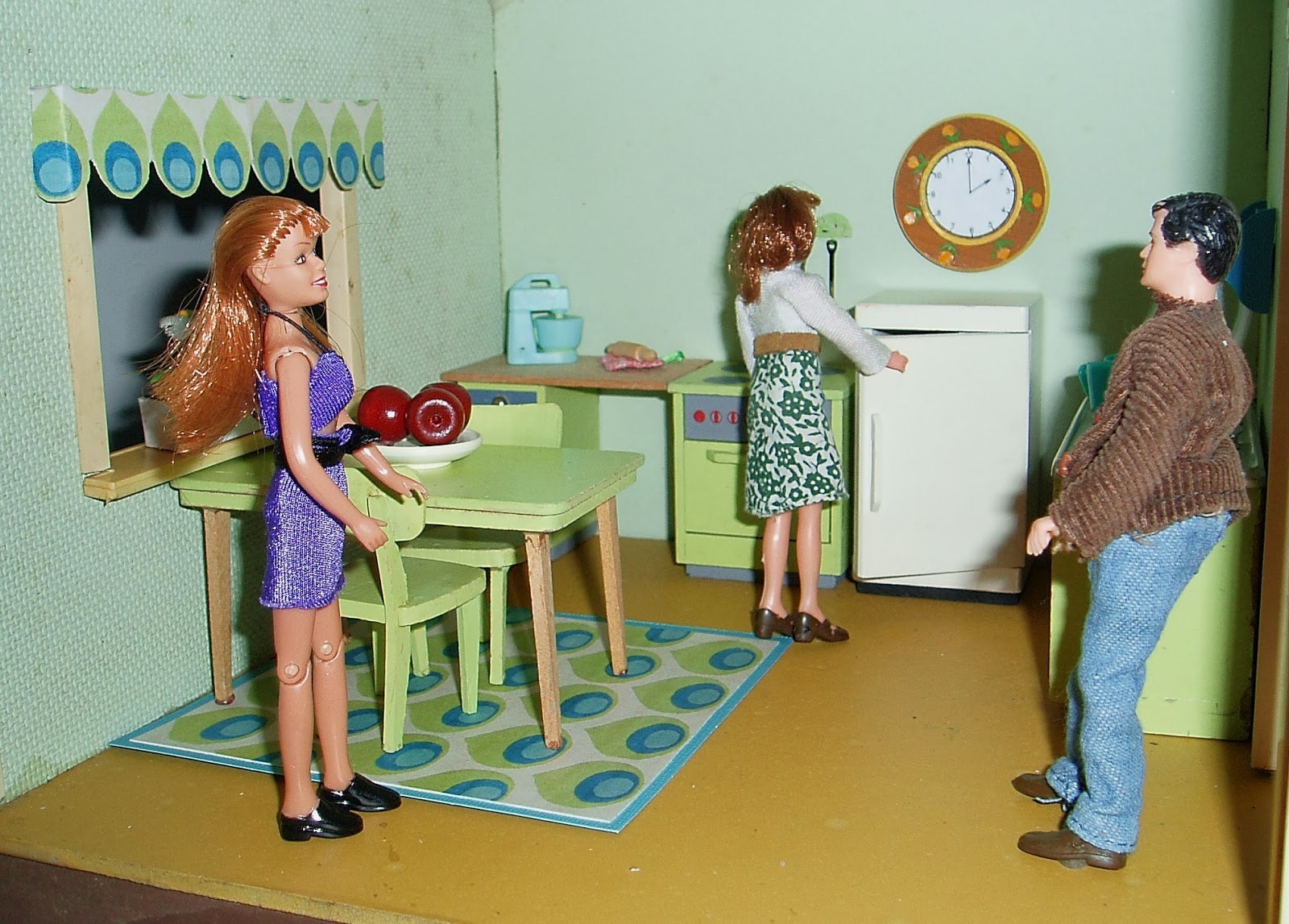 Entering the house, Chantelle first takes them to the kitchen. Christine comments that she likes the color scheme of lime green and turquoise, then laughing she says "We come all the way to America and we get a European size fridge!"  Hans-Herman, who considers himself quite the chef, tells Chantelle it looks like a good work space. 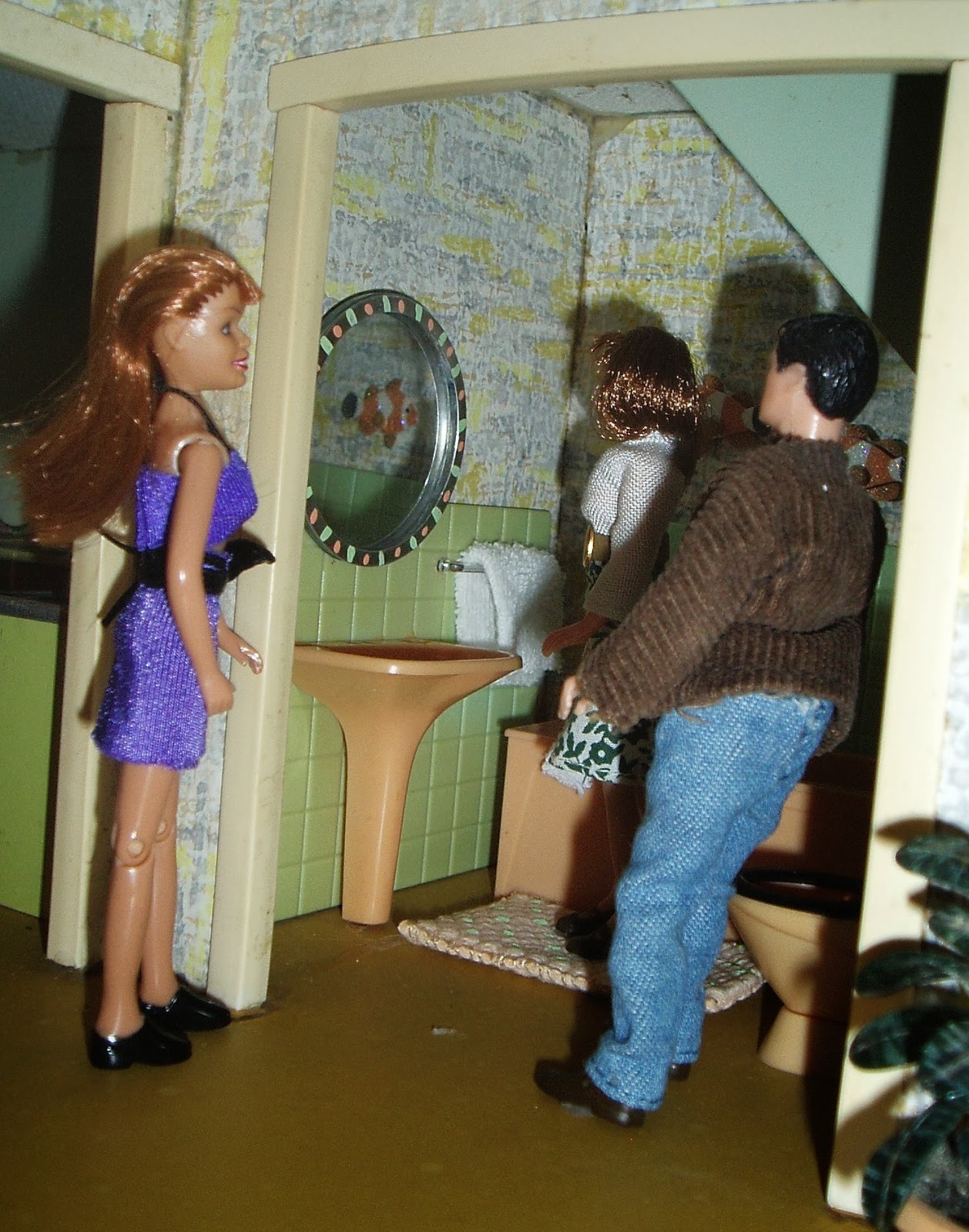 Next they check out the bathroom. "Hmm, only one sink," says Christine, "but I think the mirror is large enough to share!"  "It looks like I stepped in something, " says Hans-Herman, "and I'm tracking it everywhere! What is this? Tacky wax?" 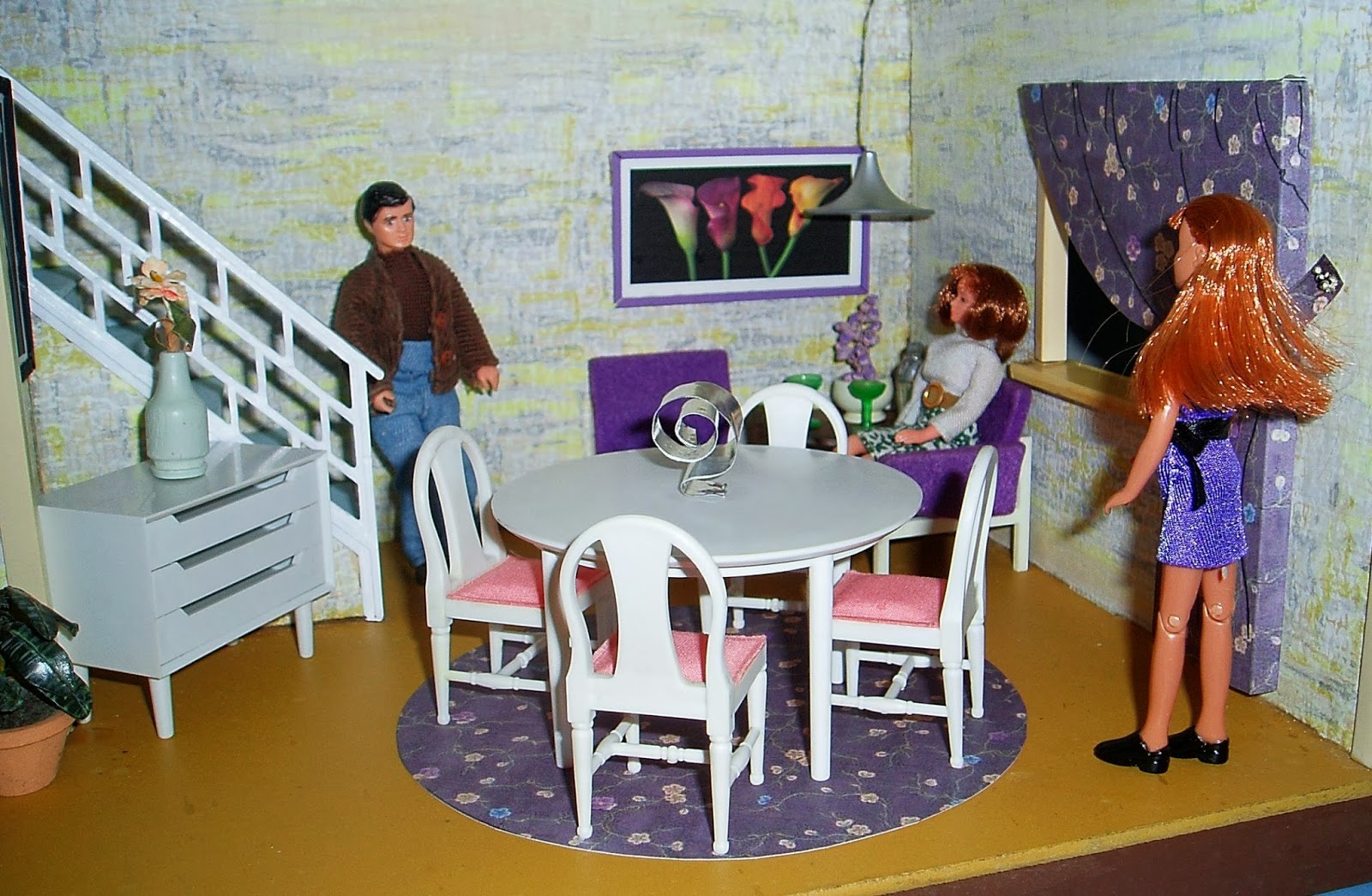 Christine falls in love with the dining room.  Hans-Herman likes the corner area  where he and Christine can relax with an after dinner drink and contemplate just what makes Texas conservative politicians bat-shit crazy.
Up the stairs! says Madge. 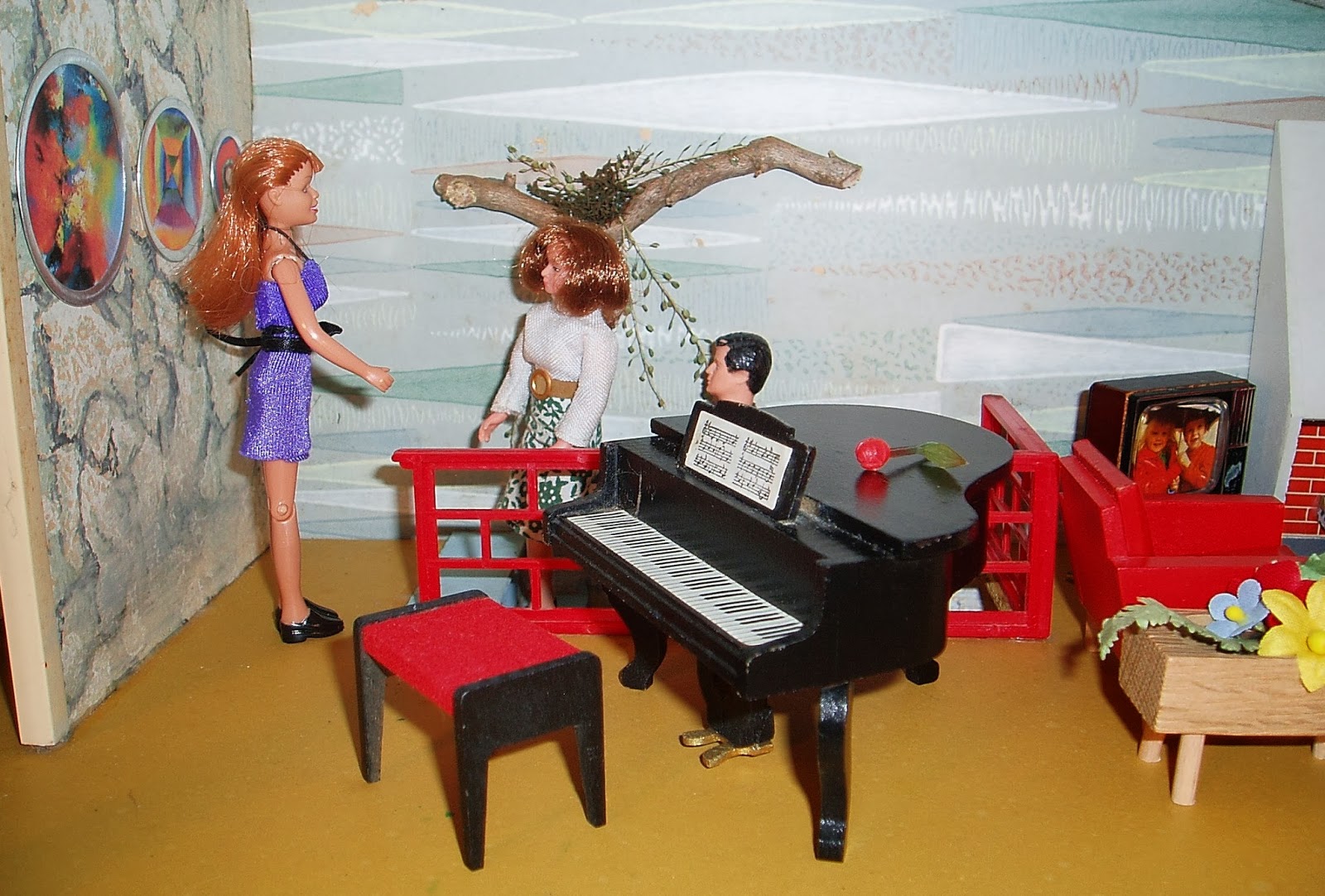 "Come, come! Come see your new living area. I just know you will love it!"

"So, what do you think? Do you like the fireplace? You rarely need one in Houston, but we just turn the air as low as it will go and light a fire!" 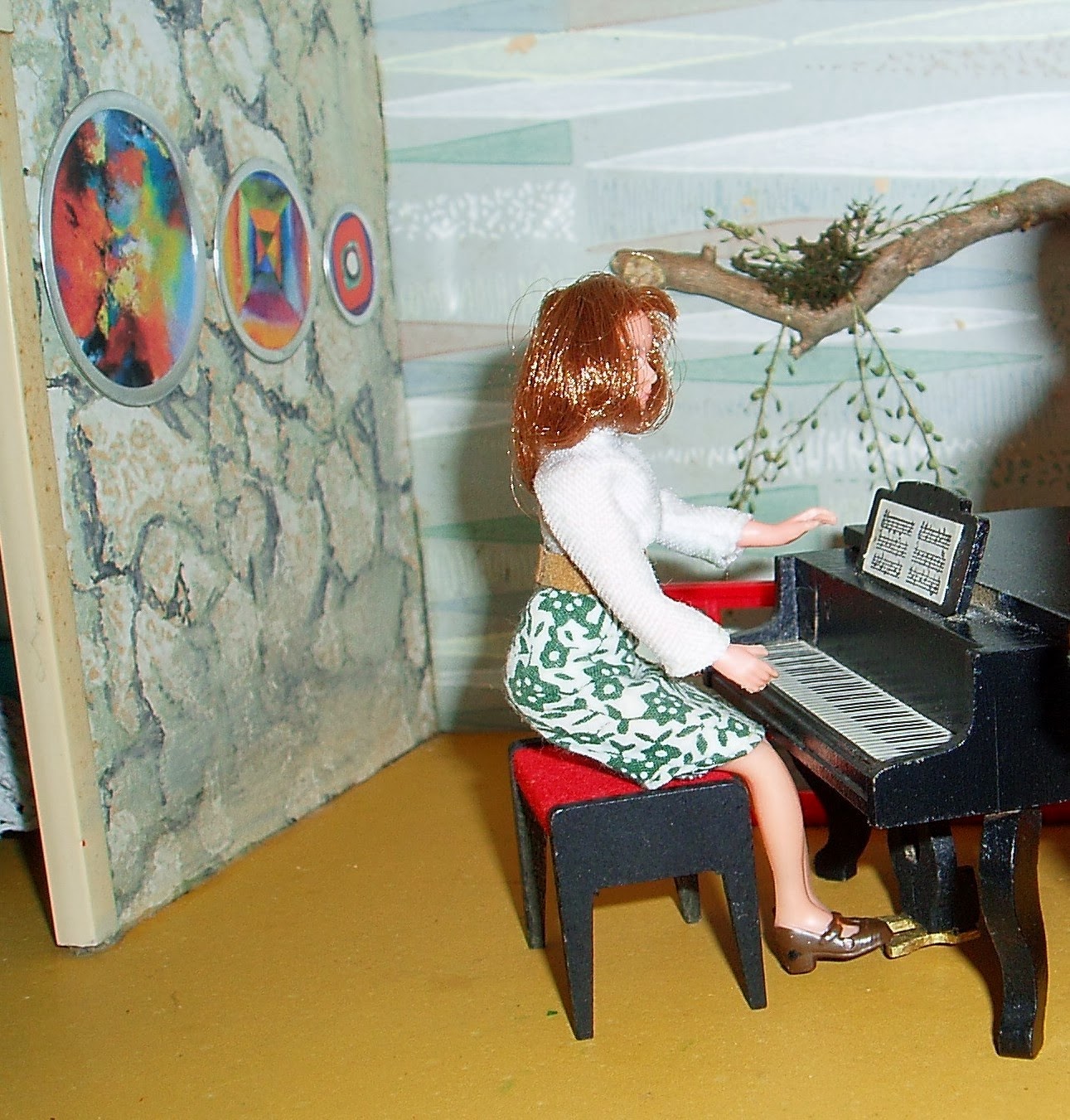 Christine starts playing some tunes on the baby grand. She had to sell her piano before leaving Germany, so she is happy to see one as part of their furnishings. 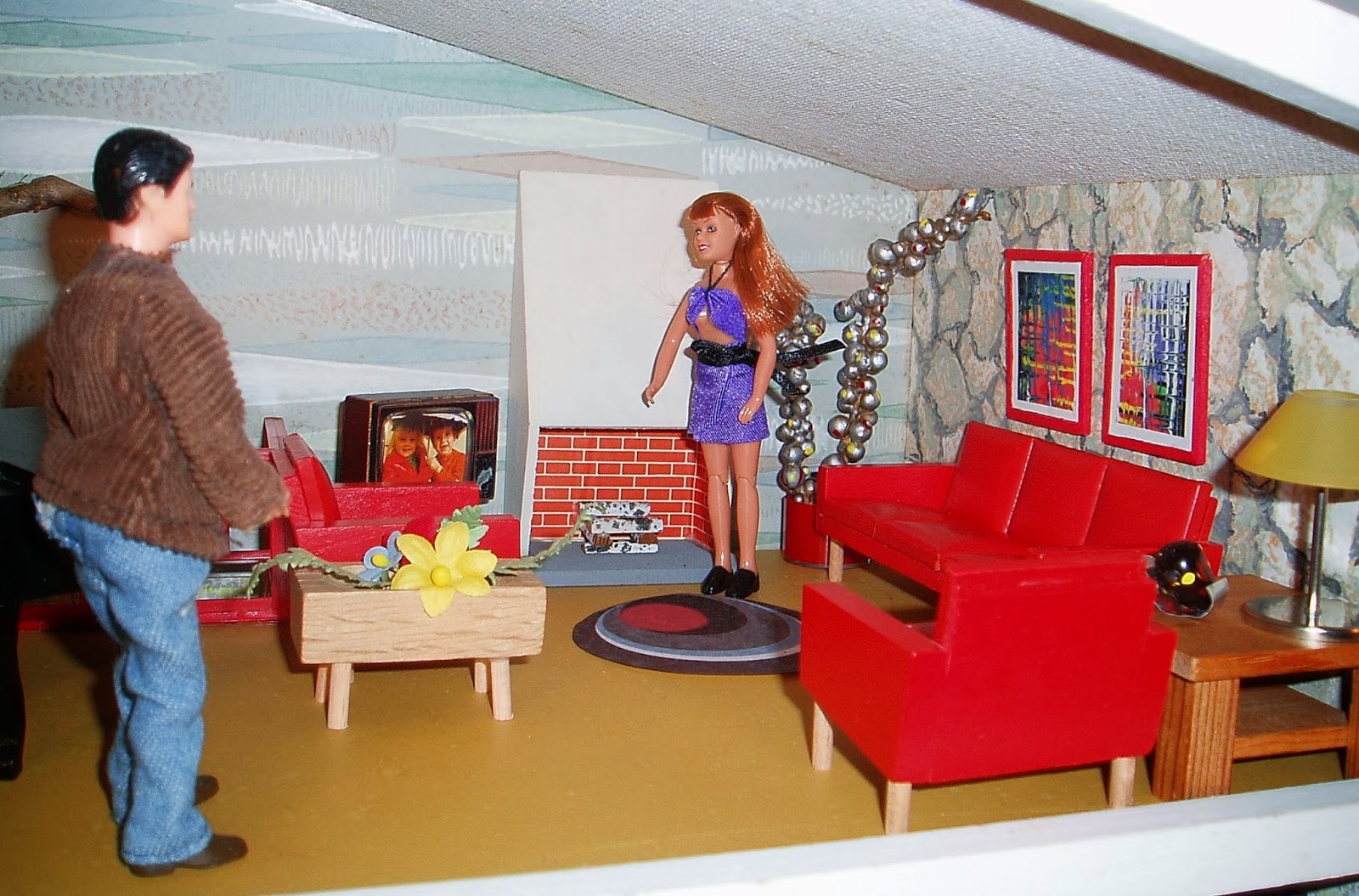 "Awwwk! Your boobs are falling out of your halter top!" says Hans-Herman. "OMG did I say that out loud??? I was trying to say where will I put the wide screen TV?" 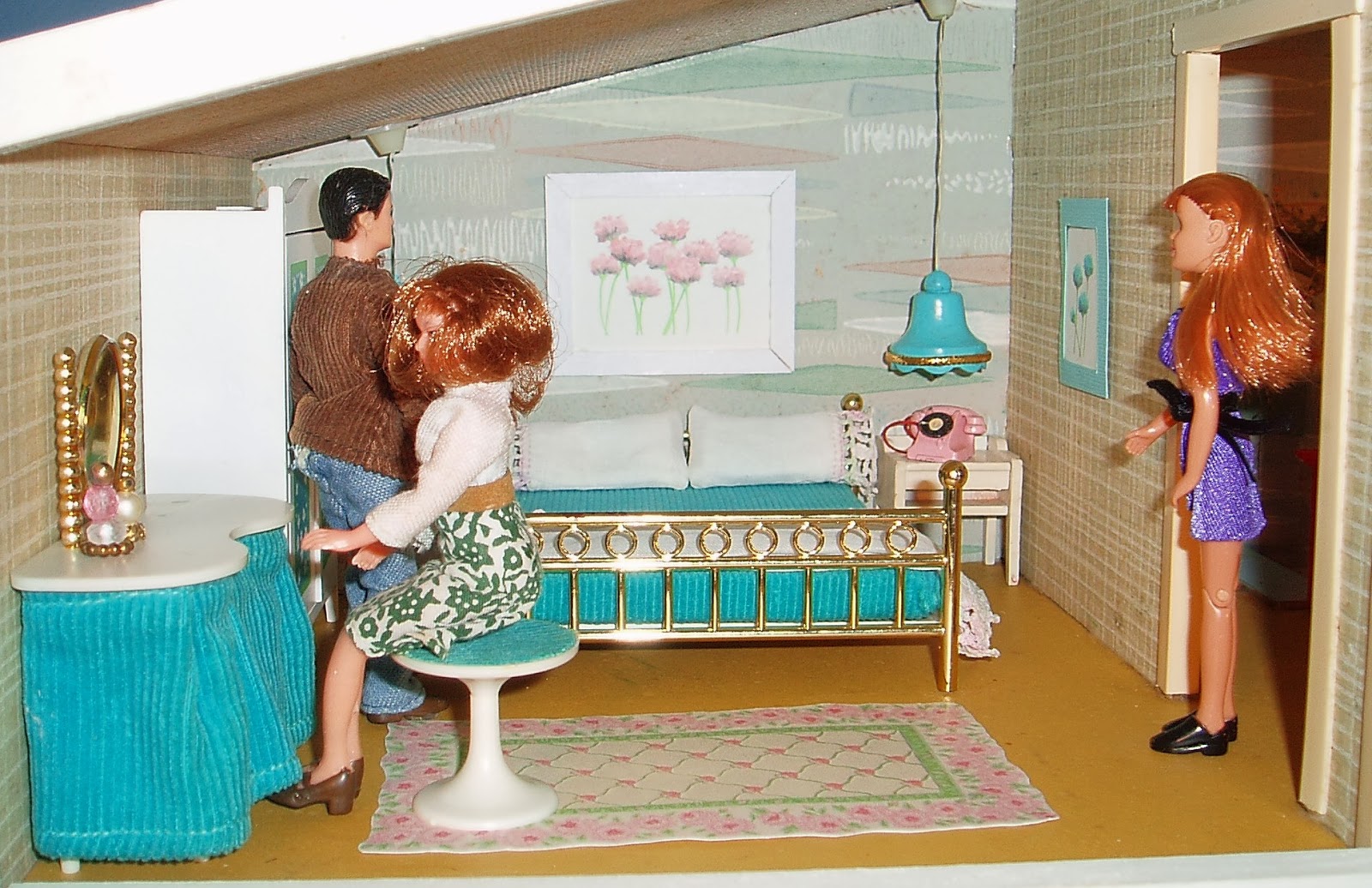 "So nice to have a vanity table since the bathroom is so small, " says Christine.
Hans adds, "The bed looks large enough for three.....I mean comfy for both of us." 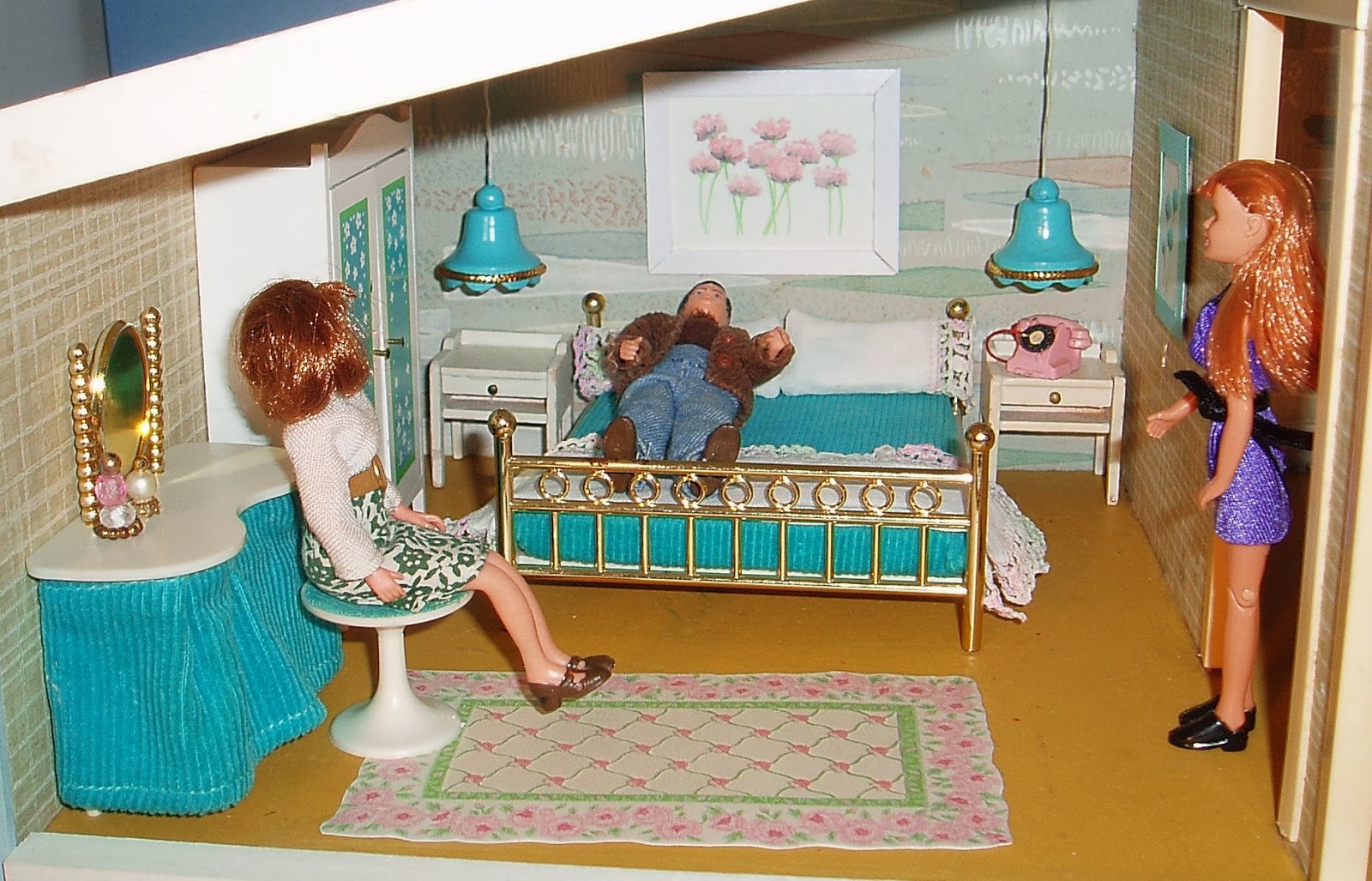 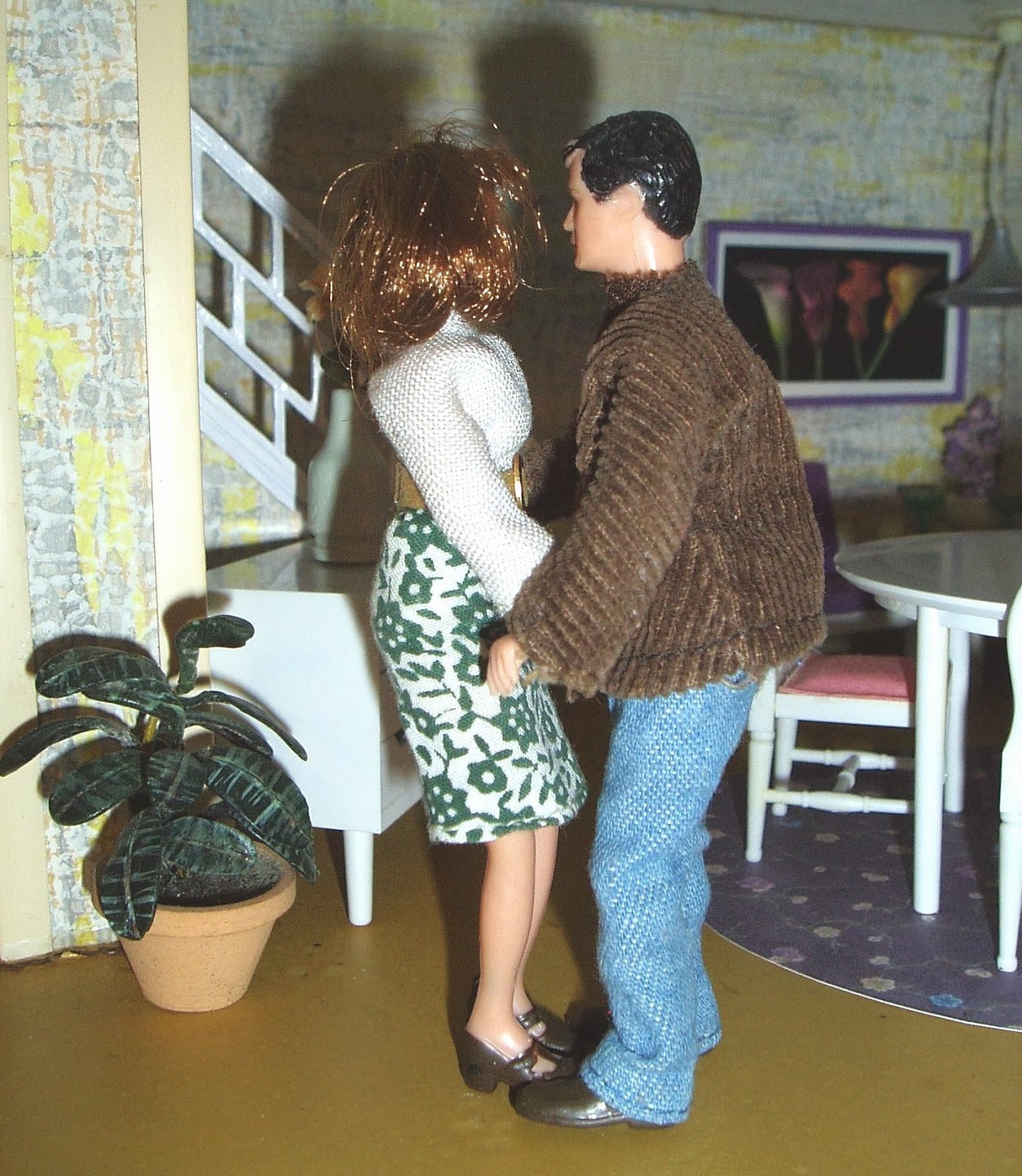 "Christine, I think we will be very happy here." 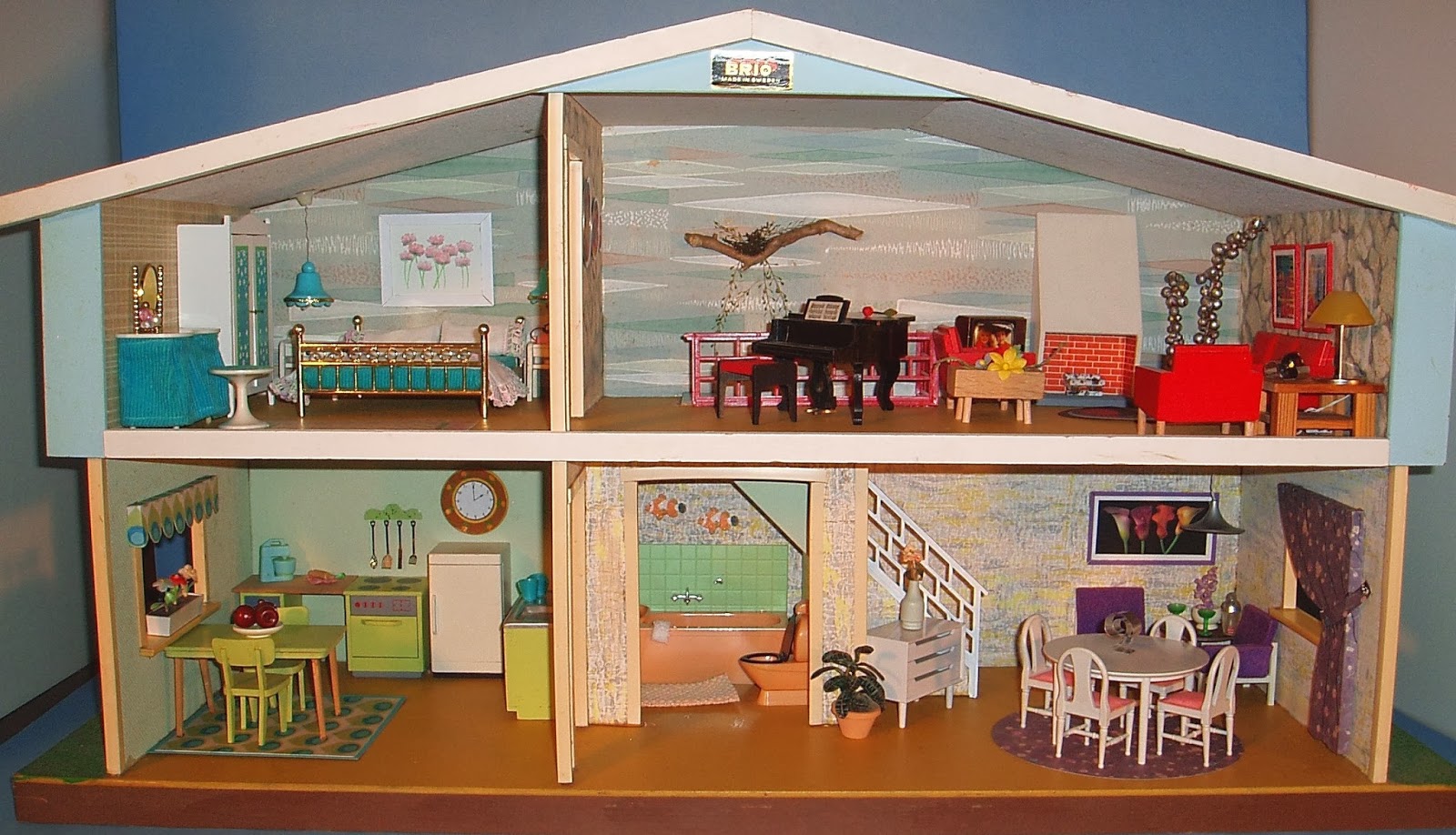 This Brio house was sold in 1966.
Needing to date your house? Go to  Swedish Dollshouses  where you will find dollhouses from the Swedish, Danish, and English toy companies Lundby,  Brio, Lerro, Micki Leksaker, Kährs, Lisa of Denmark,  Hanse, and Barton.
Elisabeth also has catalogs, from the 1950s to the present, showing dollhouse furniture from Lundby, Brio, Caroline's Home, Lisa of Denmark, Hanse, Bodo Henning, Dora Kuhn and Modella. If you haven't discovered this wonderful website previously, discover it now!

Four sets of Brio furniture can be found in this house.... 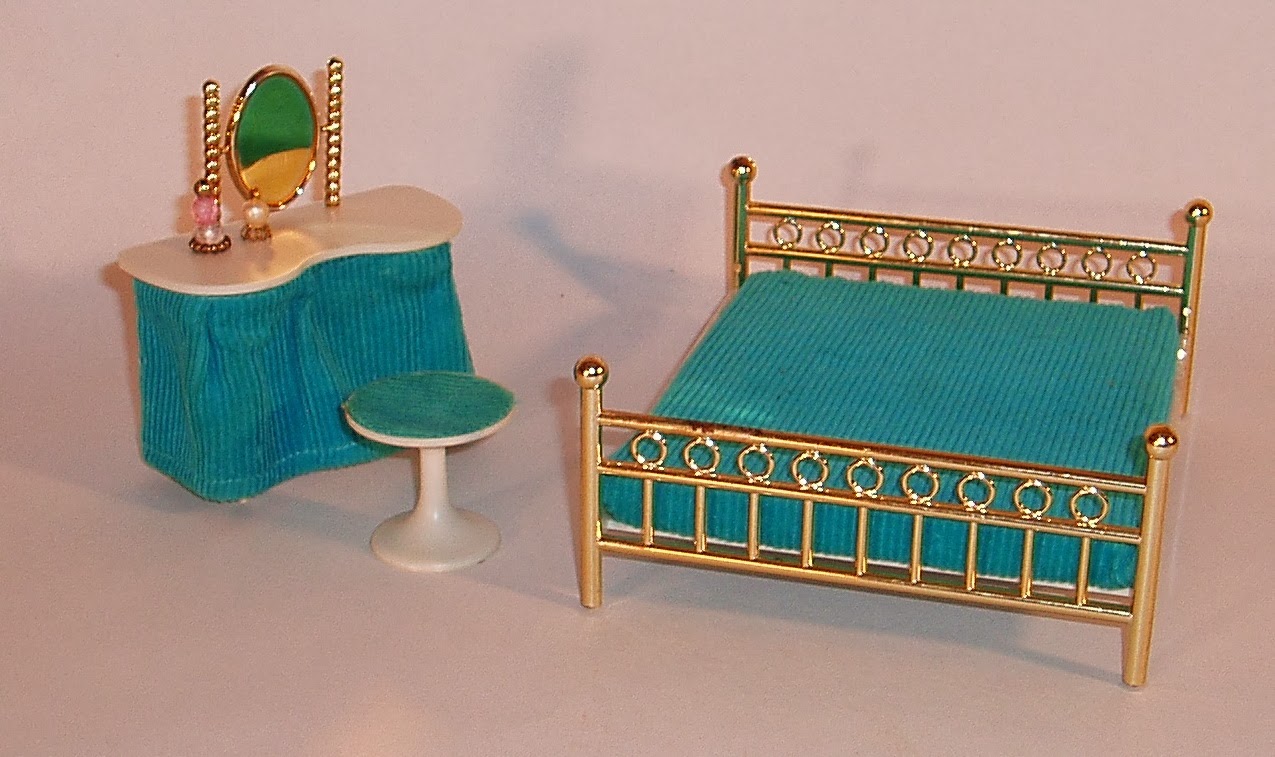 three bedroom pieces...as seen in the 1974 Brio house on the Swedish Dollshouse website... 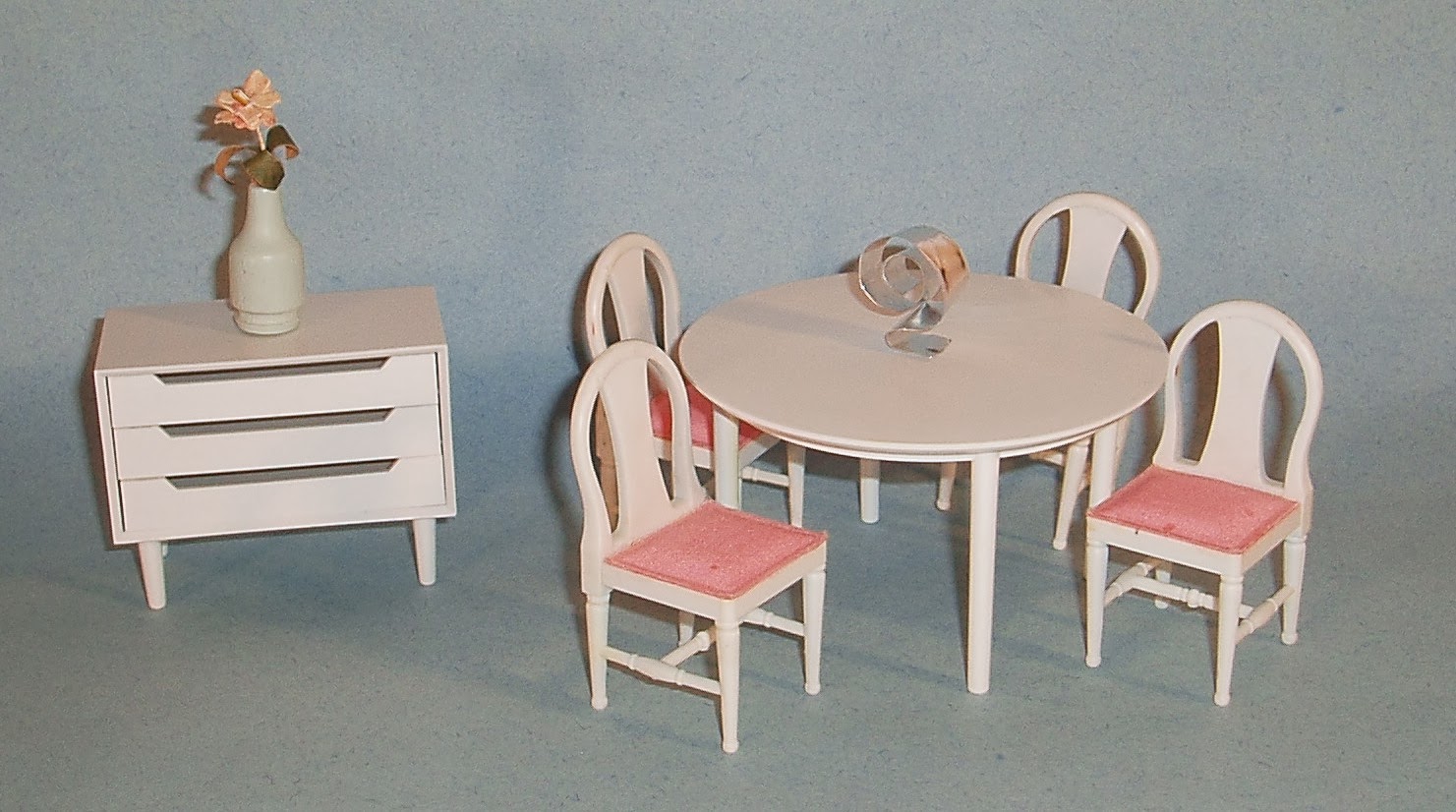 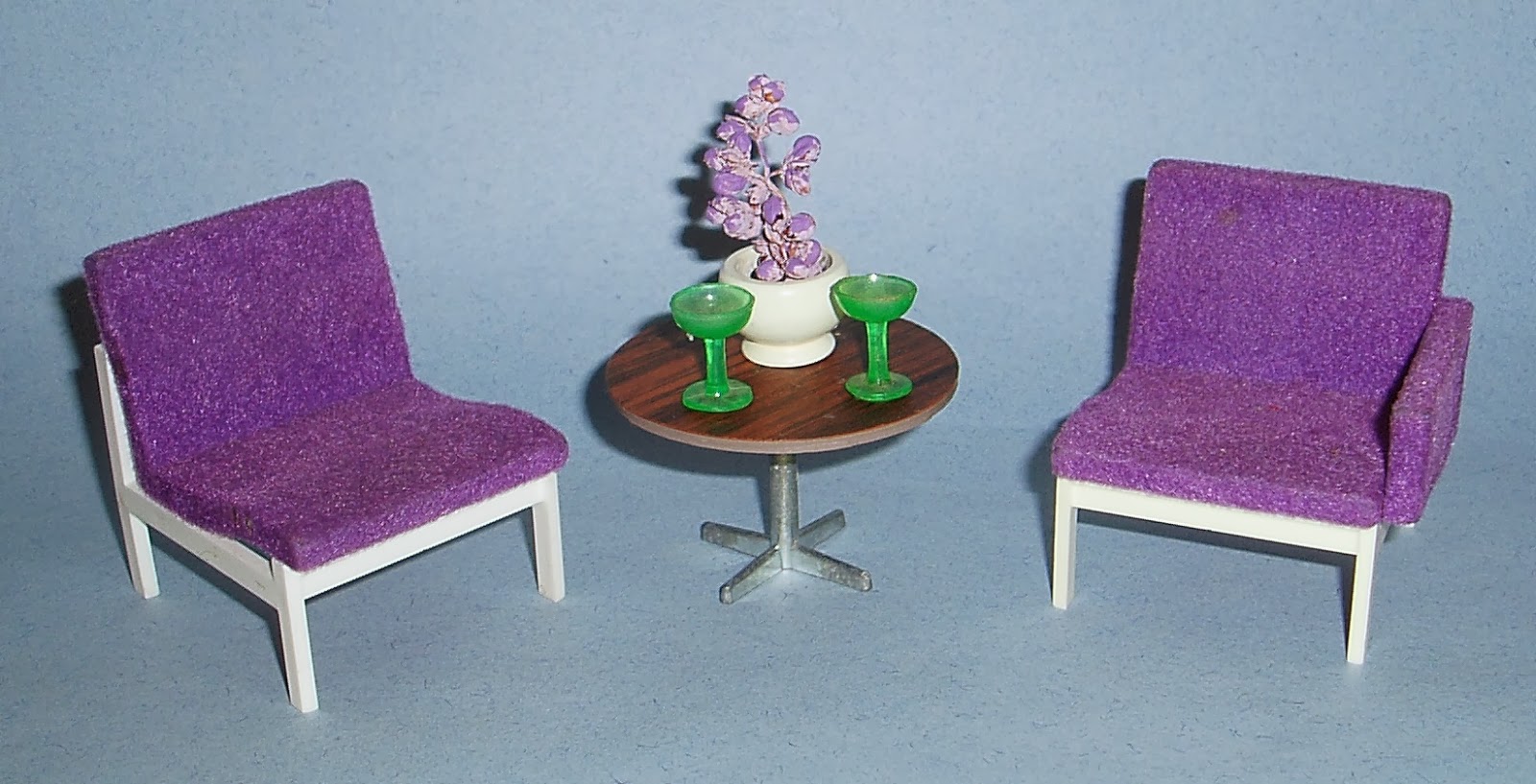 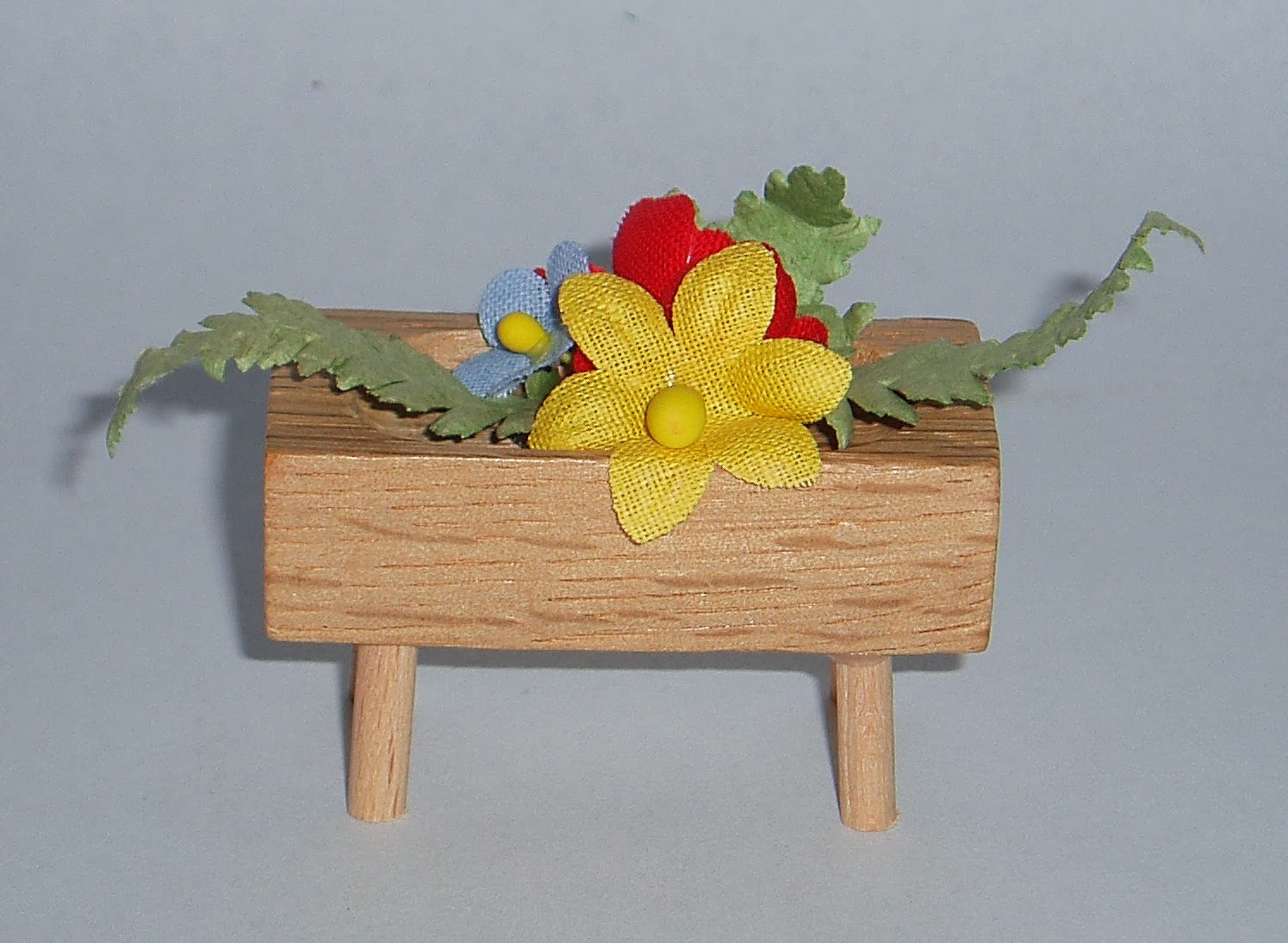 With the exception of this wooden flower stand by Lisa of Denmark (1974), the rest of the pieces in the house were produced by Lundby. 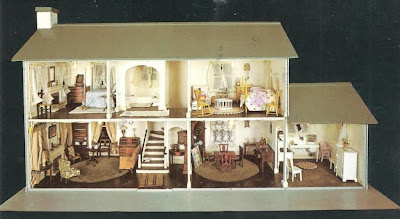 This vintage dollhouse is pictured on  a post card published by the State Historical Society of Wisconsin.  From the construction of this dollhouse, I think it was probably  built between 1935-45.  I love looking at  pictures of lovely old doll houses...so when I saw this post card on eBay it became part of my collection of vintage postcards.

This dollhouse was donated to the Society by a Mrs. Thomas Coleman. Much of the furniture is original to the house. The house itself was built by Mrs. Coleman's father as an exact replica of their house in Madison, Wisconsin.

Great staircase...the front door must have been placed behind the staircase as that looks to be an entry hall to the right of it. Several items in this room look like they might be Tynie Toy...maybe the Tynie Toy collectors can help me out! 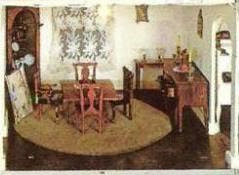 The dining room has a lovely lace curtain. Could that be a Tynie Toy dining set? 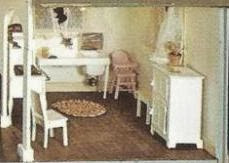 An Arcade sink is recognizable in this kitchen!
﻿ A nice cozy bedroom...with lovely old curtains that lay flat...not like curtains in my dollhouses today. Wonder what I am doing wrong?

And a cozy little nook for the bathroom.....sorry the picture is so blurred.

Could that be a dollhouse behind the yellow rocker in this cute little room for the children?
Any guesses on the brand of furniture?
Okay JoAnn and Jamie, my collector friends that live in Wisconsin, if you go to Madison please check out this little house at the Historical Society for me!
Posted by Florine at 10:22 AM 12 comments: