My 37th Keystone of Boston dollhouse.... 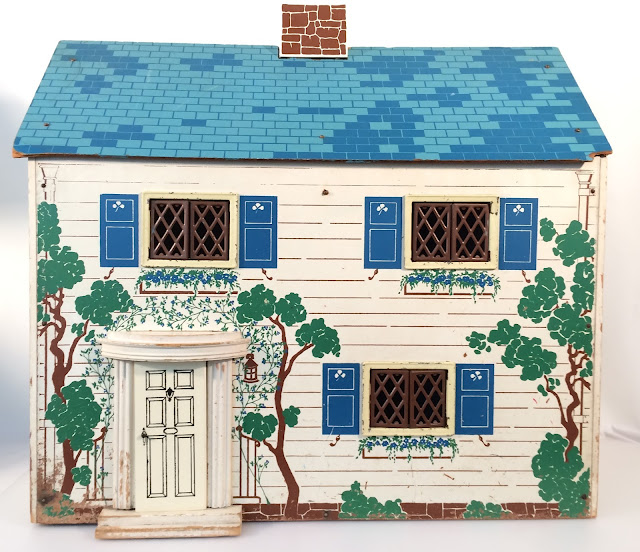 Yes, once again I was unable to pass up a Keystone of Boston dollhouse that I didn't have in my collection....mainly because the price was right and the pretty blue shutters and roof called out to me. It is in fairly good shape for a dollhouse made around 1946-47.

I borrowed the front door and chimney from another house when I photographed it....so those will need to be made. The stone graphics on the Keystone chimneys are usually grey, but I made that one to match the base on another dollhouse....and it looks like I will be making another brown chimney.  And this house might end up with a pretty blue door to match the shutters.

This little dollhouse has 4 rooms and no stairs. So, will it have two bedrooms and no bath, bath and 1 bedroom, or will I make a partition in one of the upstairs rooms to include a small bath? Paint or wallpaper? What brand of furniture from the 40s will I use? All the questions a dollhouse owner ponders when she gets a "new" little house. But since it's in good shape the refurbish should go quicker than most. I hope!


I have two other dollhouses that are similar in design and size. The house with the aqua roof and shutters has the same interior as my new house. 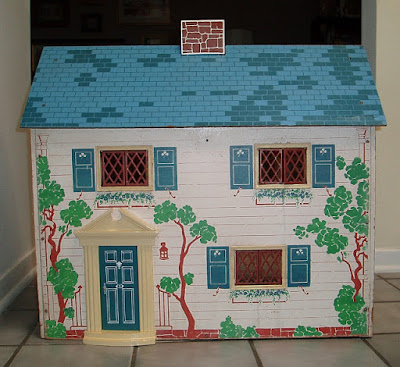 The house with the red roof and shutters has 6 room, stairs and a closet. Both of the other houses are 26" wide while my new house is only 25" wide. 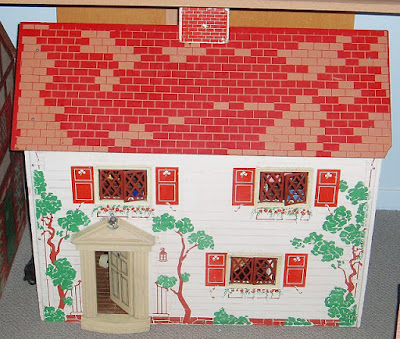 The graphics on these two houses are the same with the exception of the shutters/flowers in flower boxes being red on one and aqua on the other. The portico on both older houses are matching with a smaller portico on the newer dollhouse. 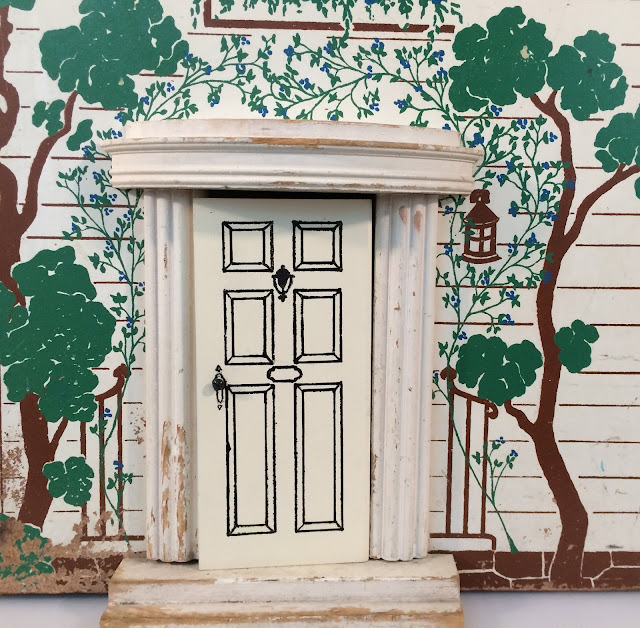 In addition to the smaller portico on my newest house, Keystone added the delicate vines with blue flowers around the portico. One of the reasons I wanted to add this little house to my collection.

So now I have 37 different models of Keystone of Boston houses....but there are more I would love to add to my collection!

First and foremost is this house I have never seen an actual photo of....only this catalog picture I found in a 1951 Union catalog publication.
It was described as a six room dollhouse with the interiors, exteriors and floors decorated in many colors with large picture windows, a staircase and recessed entrance. More information about it in this blog post. 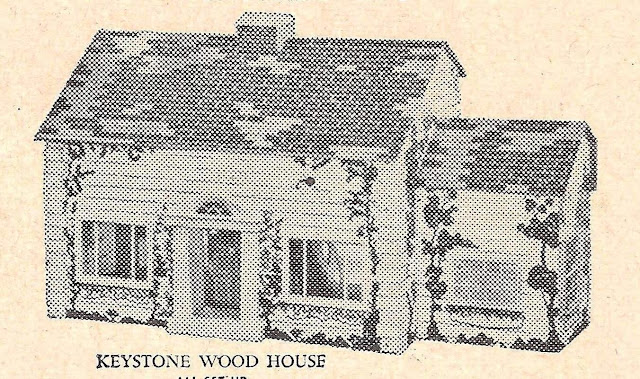 Ok, if you have it and don't want to part with it, I might settle for an actual picture of it!


Next comes this great house belonging to my friend Geraldine, editor of Dollhouse Toys n' Us . 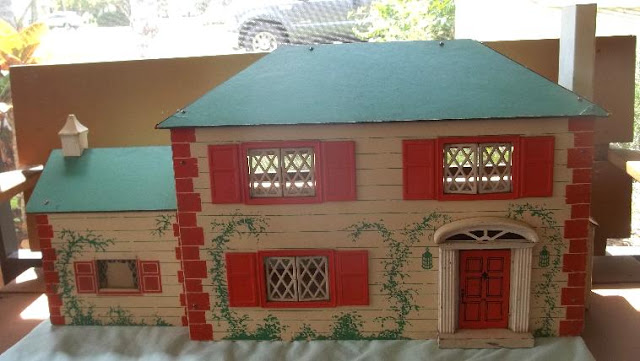 I am not sure of the production date, but it is pictured in the Keystone Toy catalog of 1938-39. It has the unusual hip roof design of an older house ...#6 on my Keystone list of houses. Plus, it is the only Keystone I have seen with a side chimney and a cupola. 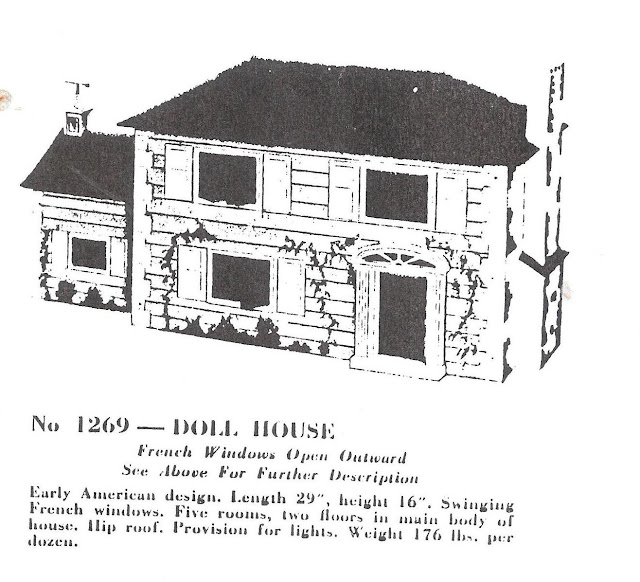 This is the house as it appeared in the 1938-39 catalog. It is possible Keystone also produced this house with white shutters and cornerstones.
I will take either!


Third on my list is this wonderful old dollhouse from the mid 1930s. Wonderful story behind these pictures.....they were shared by a very nice lady whose mother received this house as a child. Mom was turning 90 and her family was featuring her dollhouse with the original furniture at her celebration. This daughter told me she was able to identify the house when reading my blog. I told her I would like to have a chimney made by the Belingers and gift it to her mother for her birthday. 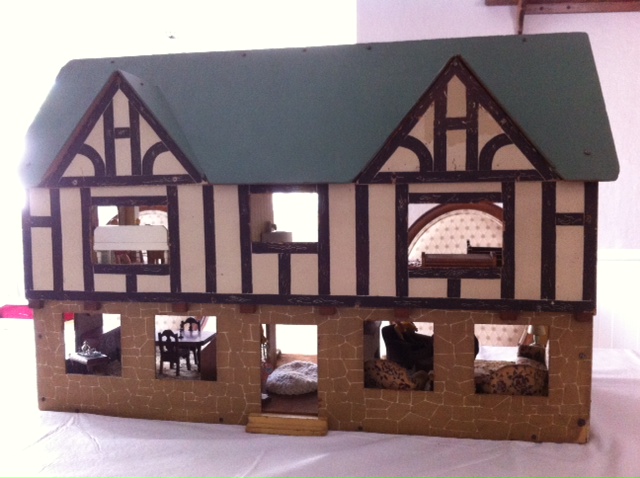 Problem is I have lost her email address and never knew her mailing address!  So, if this very nice lady who shared these pictures with me is reading this blog, please contact me at florinebettge@comcast.net so I can get the chimney to her. Mea culpa!

This dollhouse looks like it might be a larger version of my Keystone house #33, which I am currently working on. 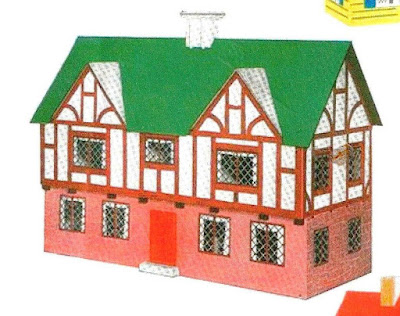 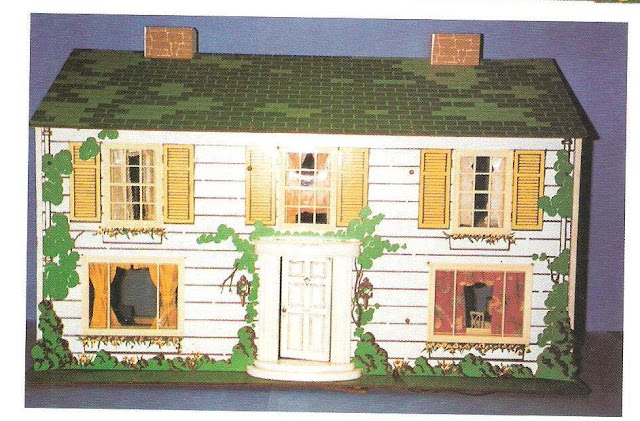 In my early years of collecting, I passed up this house many times thinking I didn't need every Keystone. But it is such an attractive house I would love to add it to my collection. And because I am obsessed with Keystone houses!


There are 2 other Keystones I have seen only in catalog pictures, but that doesn't keep me from being interested in them! 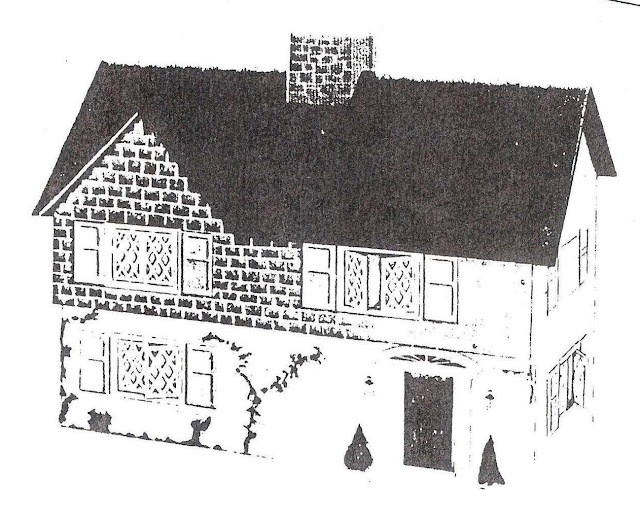 Keystone model #1271 from the 1938-39 catalog. Referred to as a colonial design, this is the only Keystone house I have seen with brick graphics. It had 4 rooms and 5 French windows....so two of the windows were on the side of the house. Catalog does not mention colors on the house. 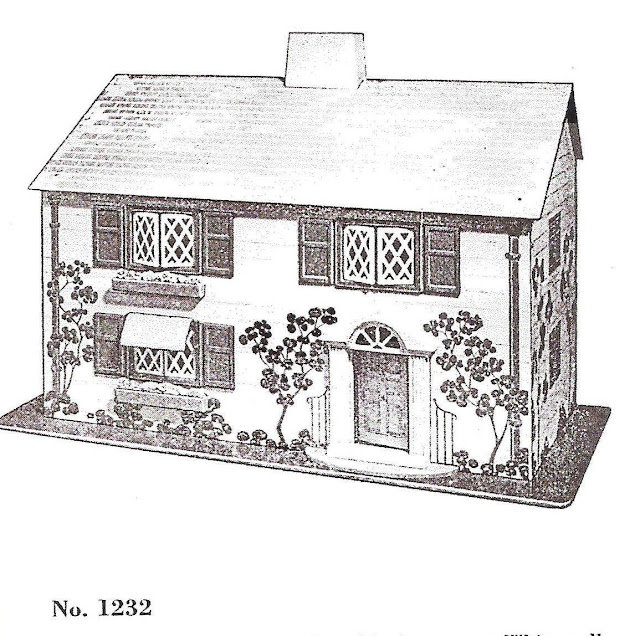 Keystone model #1232 appeared in their toy catalog of 1942-43. Described having four rooms and a blue roof with red shutters, it is very similar to my Keystone house #13.  The graphics are different from my house and the door opens on the right side of the front instead of the left like mine.

So collectors, if you are wanting to part with one of these featured houses...please contact me at florinebettge@comcast.net!
Posted by Florine at 4:30 PM 2 comments: