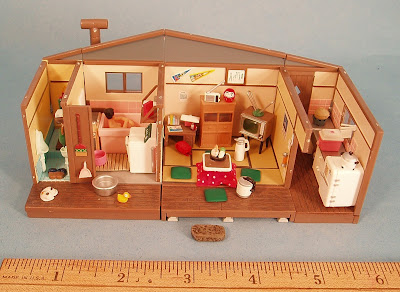 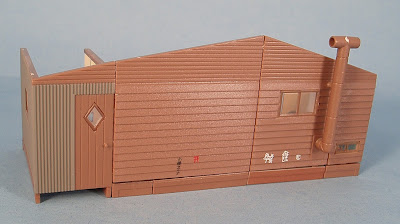 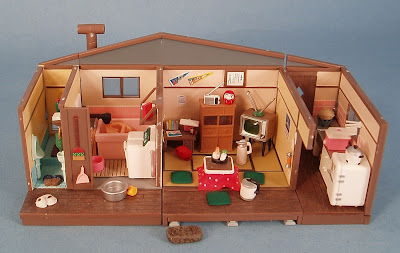 Wikipedia tells me that traditional Japanese housing does not have a designated use for each room other than an entrance area (genkan), kitchen, bathroom, and toilet.  My little house has an outside door leading into the kitchen area, so possibly, like dollhouses designed in other countries, this one is missing it's genkan.
In Japan, partitions within the house are created by fusuma (sliding doors made from wood and paper); any area can be a living room, dining room, study or bedroom by altering the partitioning of this portable and easily removed fusuma.  The fusuma in my house are not  "portable". Along this side of the house is a  rōka, a wooden floored passage that is similar to a hallway. 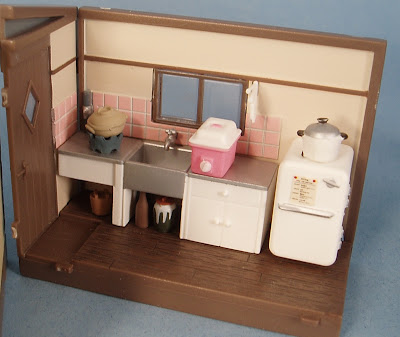 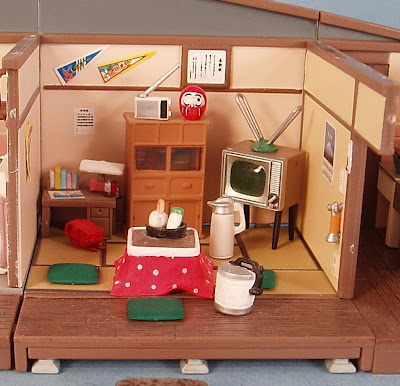 ....a living space, or i-ma........
The floor is covered with a tatami mat. I placed the kotatsu, or heated table, in the center with zabuton around for seating. In a traditional Japanese house the kotatsu is used during winter months to warm the interior. A futon covers the kotatsu and a tabletop is placed on top of the futon. A person sits on the floor or on zabuton with their legs under the table with the futon draped over the lower body. The kotatsu was designed for people wearing traditional Japanese style clothiing, where the heat would enter through the bottom of the robes and exit around the neck, thus heating the entire body.
All the furniture in this room is movable.
Hmmn, that could be the rice cooker by the kotatsu.... 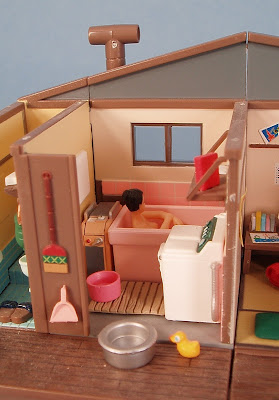 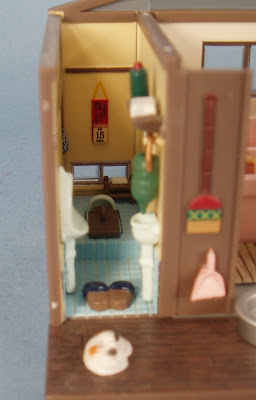 ....and a separate room for the toilet.
This room appears to have both a urinal and a squat toilet. 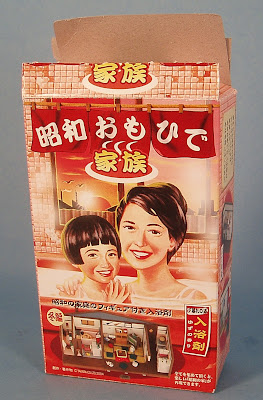 The parts of the house came free with a packaged food....
possibly a soup or some type of sauce mix. 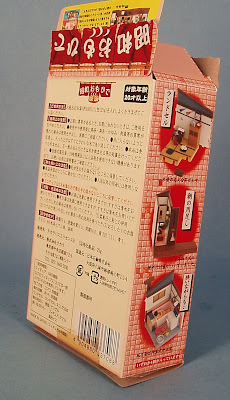 All the boxes appear to be identical, but  somewhere there must be an indication as to which part of the house was included in that  particular box....after much study it has eluded me.

"The style of the house is very postwar Japan -- it represents a typical family home from the Showa (昭和) Era. People lived very simply, eating, studying, and sleeping in one room. The dollhouse is filled with classic artifacts from the 50's and 60's (some of which are still commonly used today). The boxes are not marked with the specific contents on purpose -- you're supposed to keep buying parts of the set until you collect them all, kind of like collecting stickers or baseball cards. The pot on the burner is called a nabe or donabe (earthenware pot) and used for cooking soup. "
Posted by Florine at 9:30 PM