A Dora Kuhn dresser lands in a charming Wolverine dollhouse....

It all started with this little Dora Kuhn dresser.... 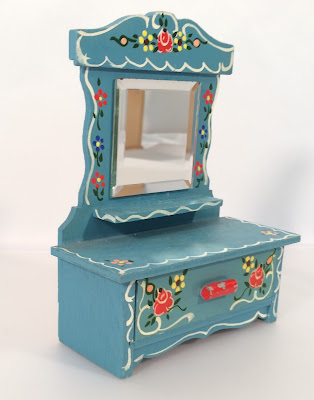 I occasionally sell on Ebay and sometimes buyers share with me just where my little treasures have landed. Chris, the new owner of this little dresser, shared the most charming pictures of her Wolverine house with an eclectic mix of furnishings, including items she created. I was so captivated by her little house that I asked if I could share it with you. Here is a guest post from Chris!

Received the lovely Dora Kuhn dresser yesterday, via E-bay, and am so pleased with it! Thought you might like to see what I’ve done with it. It’s become a sideboard in the living/dining room of the Wolverine tin litho dollhouse here.

Though tempted by the occasional Canadian (Eagle) and British (Mettoy) that turns up, I’ve limited my collection to just American tin litho dollhouses.  I’ve about forty now, good heavens! The Lord has provided opportunities to acquire, and room to display, and I am grateful for each Marx, T Cohn, Wolverine, Jayline, Meritoy, Ohio, etc. tin abode.

I’ve seen your informative blog, and am impressed by your knowledge of not only the doll houses, but their furniture as well.  Most of my doll houses here contain a happy eclectic mixture of vintage pieces (from thrift shops and online) and items I’ve made.

I’ve lately grown fond of the Dora Kuhn articles, and have outfitted one of my Wolverines as a rather “neo-peasant” house, with mostly Dora Kuhn things.  This house has rooms large enough to allow for 1:12 or 1:10 scale furniture. Accessories are SOMEWHAT to that scale.  Some treasures I want in them are larger, but seem to nevertheless work. I often paste magnets or magnetic sheeting to the backs of items, and then attach to the metal walls.  Works well. 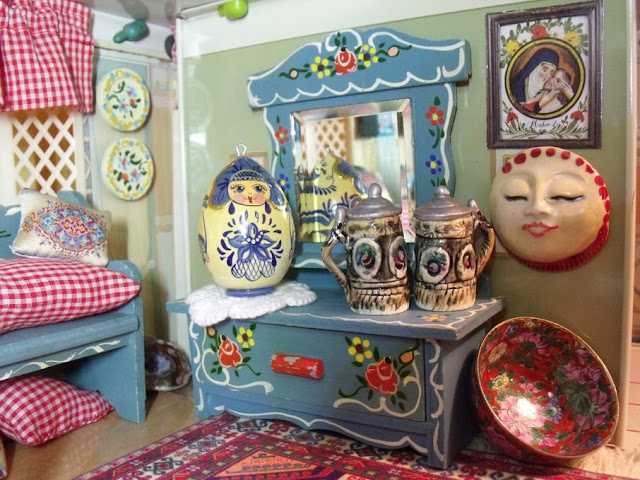 I hand-built the pair of steins. I made and sold pottery for years, and like forming this fun little stuff! Also made the clay face on the wall, originally a pin. Matroishka egg is a Christmas ornament. The small red Chinese dish is a gift from friends.

Sewed all the curtains, quilts, bedclothes, towels, and cushions. I like the red checks, though I realize the scale of checks here is smaller than the usual cloth articles that come with old Dora Kuhn furniture.

Had two old plain wood discs, which I painted up somewhat in that style, and ‘magnetized’ to the wall.  Pieta portrait is a printout (Google) of an old German reverse-glass painting. A mini real geode lurks in the corner.

I sewed the curtains with a pocket on the tops to hold a skinny craft stick, and pasted a magnet on each end of the curtains’ backs to attach to the tin wall. Above photos of the back and the front of a curtain. 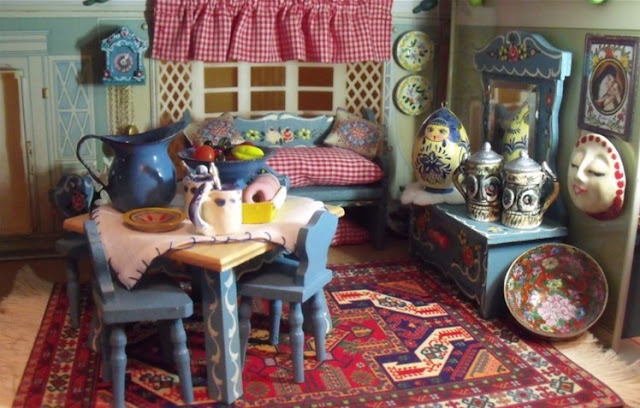 I made the wall clock from a portion of a plastic Dollar Tree toy clock, added chains and printout clock face, and painted it up. Also signed the back with my name and date since I would not want any future owners or sellers to think it was an oldie Dora Kuhn one!

Made the giant mugs on the table. Though also quite huge, I really like the blue enamel pitcher and fruit bowl, so they stay. Also made the mugs and plates in the kitchen. I stitched around the tablecloth, a portion of an old handkerchief. 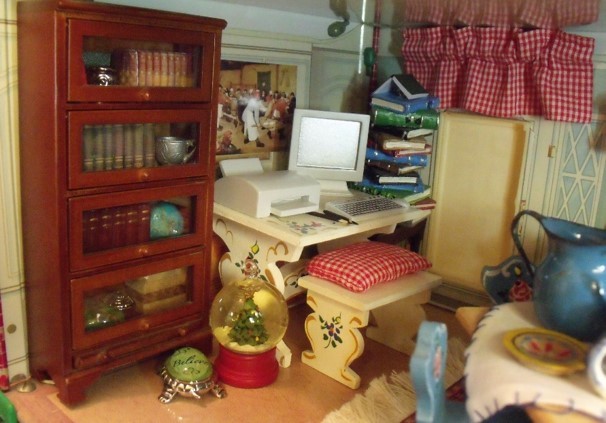 The other side of this room is the 'home office', with computer and books. Like a real lawyer's bookcase, the doors swing up when opened. The stack of books in the corner is a Christmas ornament, with an open dollhouse-sized book face-down on top. Tree globe and 'Believe' glass-topped turtle are also gifts from friends. More treasures!.

Printout of Pieter Bruegel's "Peasant Wedding" (1566-69) hangs on wall above the computer. You'll notice there are some non-Dora Kuhn items also throughout the house.

This is the entire Office/Living/Dining Room. Rug is a computer mouse pad (Amazon). 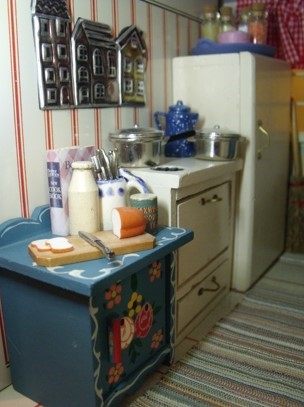 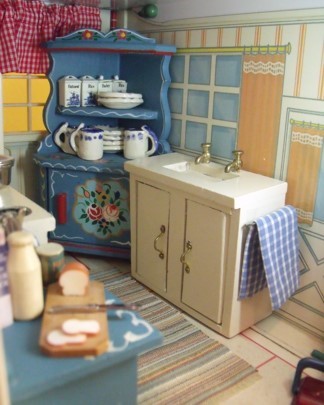 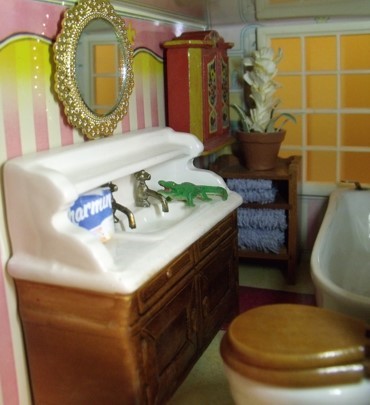 The Bathroom. The Dora Kuhn red cabinet on the wall is now the family's medicine chest. 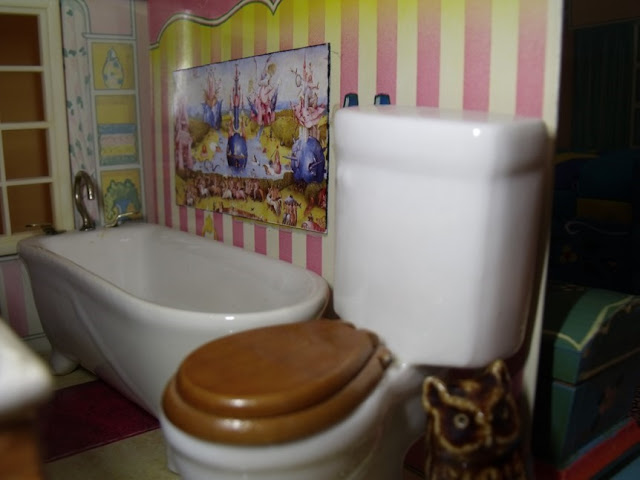 Over the tub is a Bosch print. 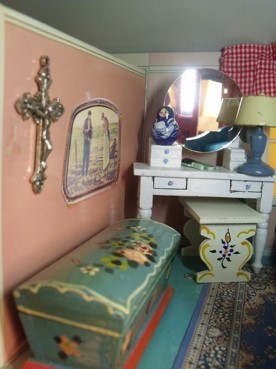 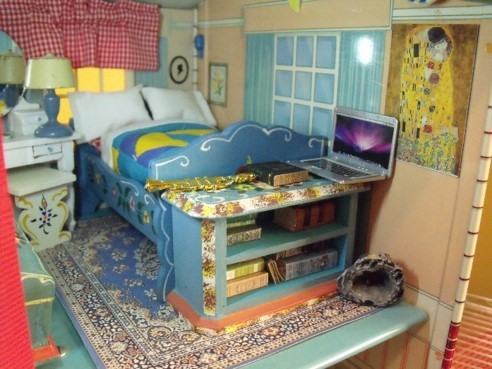 Parents’ Bedroom. The Father dug out his trumpet from the attic, to practice for his solo for this year’s Midnight Mass on Christmas Eve. 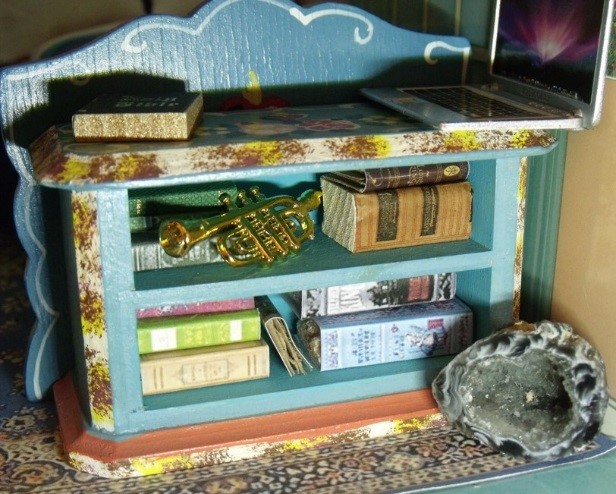 The bureau you see at the end of the bed was sold to me with drawers missing, so I made it into a bookcase. 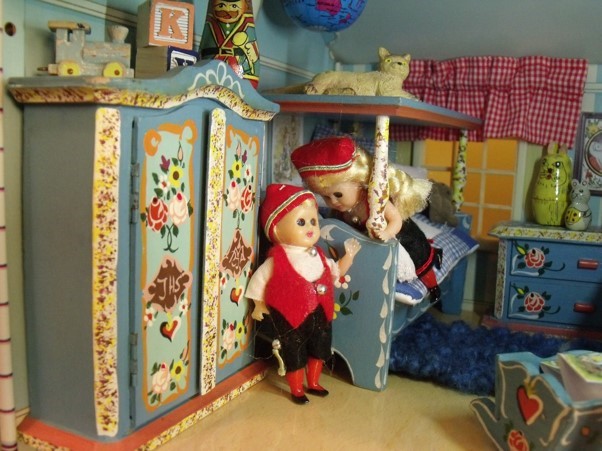 The children’s room. You see the sister and brother Helga and Hans, sharing some secret. 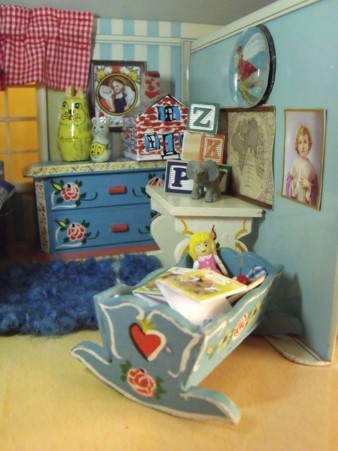 They are about a year apart in age, and each slept in the cradle their first few months after they  were born. But now, their Mother lets Helga keep her dolly and books in it. 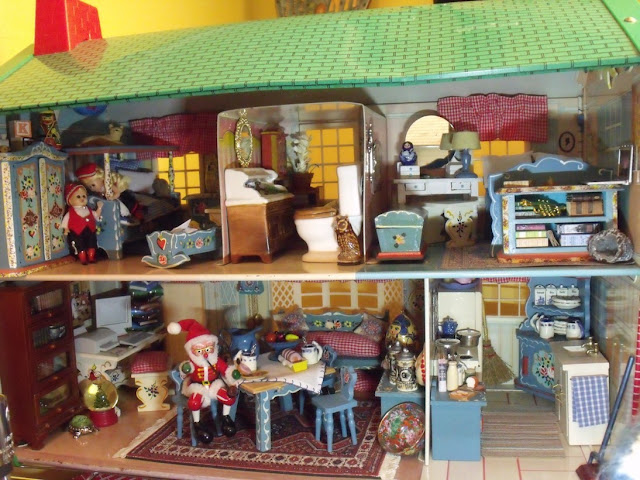 Here is a more up-to date picture of the entire house. I changed out the living/dining room carpet. This new one is the same carpet print as Sigmand Freud had on his office floor (AND another of same pattern on his couch), in Austria. Thought it gives the place a further Bavarian flavor. 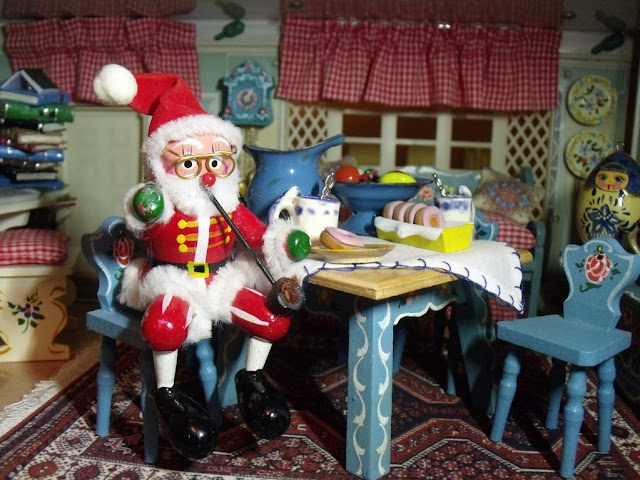 Whoa! Notice who’s come to visit, and is sitting to have a doughnut and hot drink?   Weihnachtsmann!!!!    Or as we know him, Santa Claus! Or Father Christmas. Maybe Helga knows he’s here, and his visit is the secret they’re upstairs sharing.

Posted by Florine at 2:58 PM No comments: