When I told you the story about Lorraine Aubuchon who lives in my little French dollhouse, 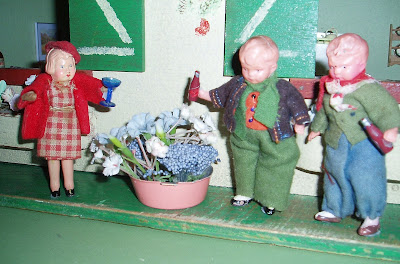 I sadly lamented that somewhere along the years she had lost her arms and they had been replaced with  pipe cleaners. Well, if I had done proper research I would have found out that her pipe cleaner arms were original to her when she was brand new in 1942. I first suspected I needed to do research when I saw a pair of these dolls on eBay...a little boy and girl dressed in sailor coats and hats...and they too had the pipe cleaner arms. The seller thought they might be British made and dating to the 1920s.  Then one day, while looking through Marcie and Bob Tubbs wonderful Dollhouse and Miniature Dolls 1840-1990,  I found an article about these cute little dolls with the chipmunk cheeks, double chins and  high-heel shoes. 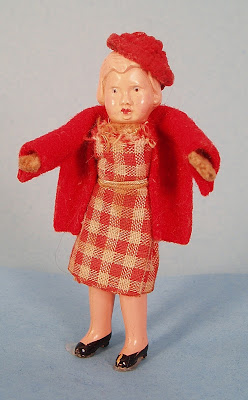 These little dolls are thought to be American made and distributed by Q.T. Novelty Company and B. Shackman and Company (two toy distributors located in New York City) starting around 1942. Production continued through the late 1940s when the dolls were redesigned with plastic arms instead of the pipe cleaners used during the war.


Marcie Tubbs generously shared some non-copyrighted pictures of these delightful little dolls. Here is an advertisement that appeared in  Playthings in 1946. 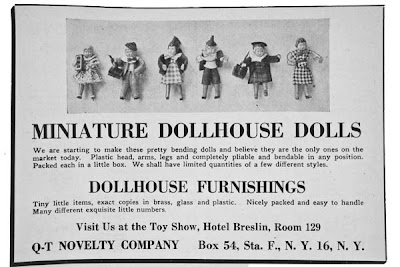 I think I see 4  children with book bags, possibly a school teacher
...and the last has to be a mother
because she has one hand on her hip! 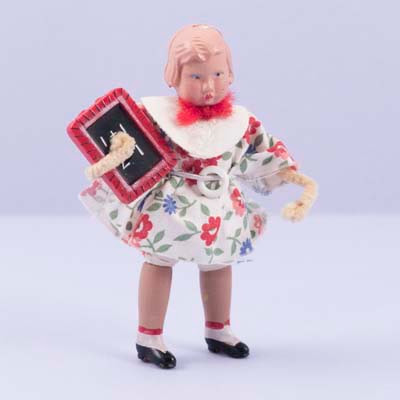 And here is the first little school girl...still with pipe cleaner arms. 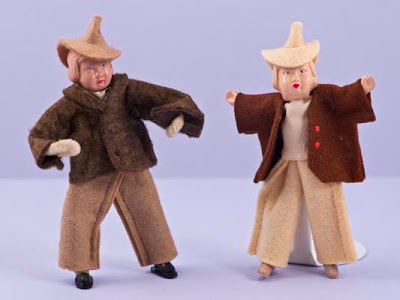 Examples of man or woman in pantsuit, pre-war and post-war.
Pipe cleaner arms on left....plastic arms on right. 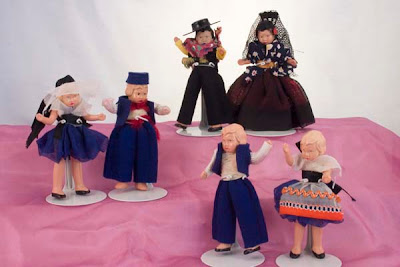 Dolls dressed in national costume were also made
....here we have Dutch, Spanish, and French/German dolls... 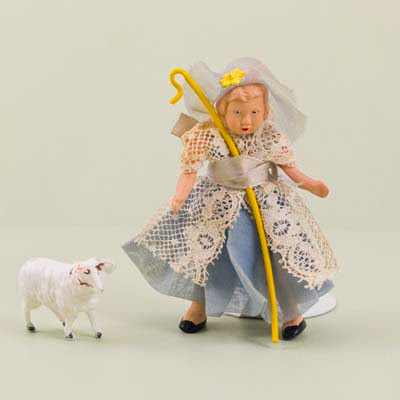 ...Little Bo Peep!
The lamb is from the same period, but did not come with the doll.


I have found another doll since I first told the story of Lorraine....
she is a evidently a nannie... 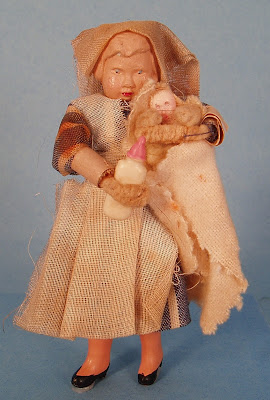 ...a bit brown with age, but holding that plastic baby tightly in her pipe cleaner arms! 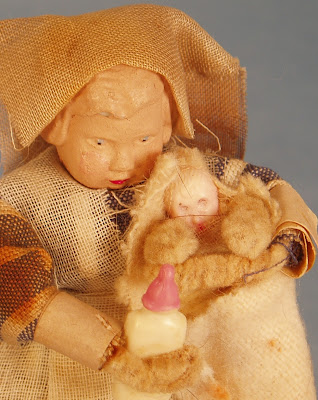 The baby is not the prettiest I've seen; but like the larger dolls, it also has little pipe cleaner arms...no feet...but with delicate edging around the bottom of the little baby dress. 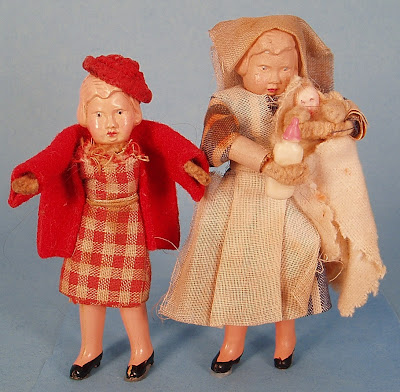 She is a bit taller than Lorraine....at 3.75" compared to Lorraine's 3.25".  I hope to find more of these little dollies to stay with Lorraine at her country cottage!

You can read more about these little dolls in Dollhouse and Miniature Dolls 1840-1990. It is a wonderful resource material for anyone addicted to little houses and the families that live in them!