Most often it is difficult for a dollhouse collector to part with one of her little houses....that certainly applies to me.  I would much rather give one of my houses to a good home than sell it. So when my sister-in-law Cindy reminded me about the Empty Bowls Food Pantry Drive she co-chairs each year, I asked if she would like to have a dollhouse donated for the silent auction. She said yes! Donating to a worthy cause is as good as giving to a good home. J
After a bit of contemplation, I decided to donate the very first dollhouse I purchased in 2005....a 75 year old Rich Toys house. 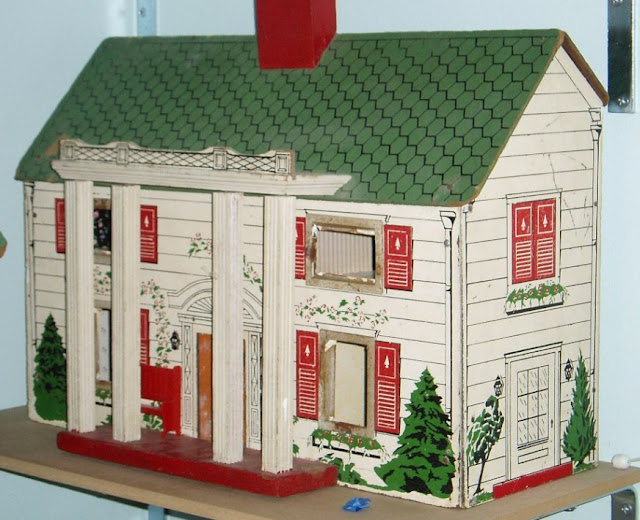 It was in rather sad condition and desperately in need of a restoration....especially since I've had it for 10 years and done nothing with it.

This is the house as it appeared in a Rich Toys catalog in 1940.
So I got busy...and now it is much more presentable! 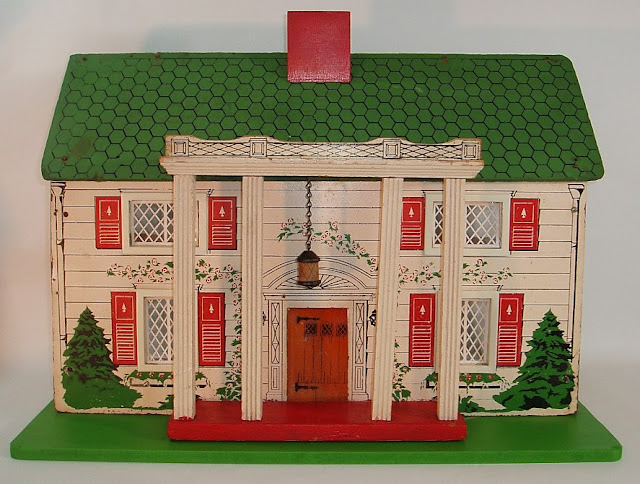 I added a base for support, made window inserts, and added some touch-up paint to the roof. Because I prefer to keep my little houses as original as possible, I didn't attempt to touch up other areas on the exterior. I then added a replacement lamp made by JoAnn Belanger. JoAnn makes replacement parts for Rich Toys and Keystone of Boston vintage dollhouses. (contact email on request) 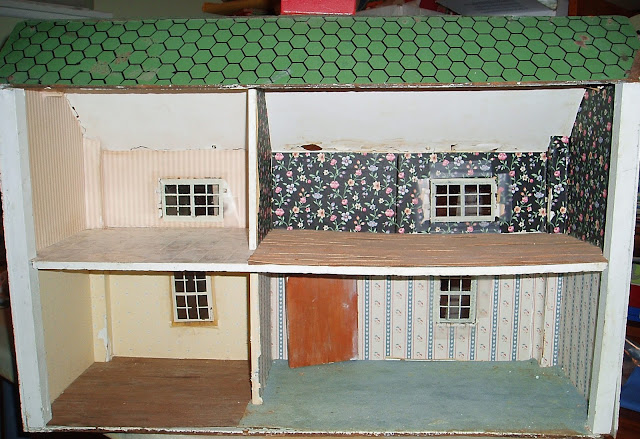 This little house had gone thru a major renovation with a previous owner, ...wallpaper was added (using Elmer's glue I think), wood flooring strips were glued in and had warped, the carpet was glued down,  and the  house was partially glued together so I wasn't able to take it apart when refurbishing it....so the floors remain warped.  It's always much easier to restore a house when it can be taken apart. I added  windows, but later realized they were the wrong style.
And now it looks like this..................... 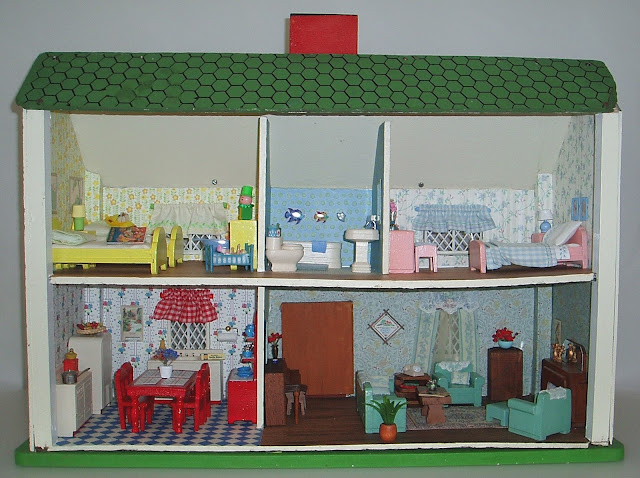 I repainted the ceilings and added fresh wall paper and floor paper. I also added a partition on the top floor to create a small bathroom....owner's prerogative!

The furniture in this little house was made by  Strombecker from 1934-1942 , exception.. ..the fireplace and coffee table are Nancy Forbes, circa 1940. I repainted most of the furniture the same color, as 75 years worth of sticky little fingers does not clean off. The kitchen table, chairs and hutch came to me painted a dark brown, but red is a much happier color! 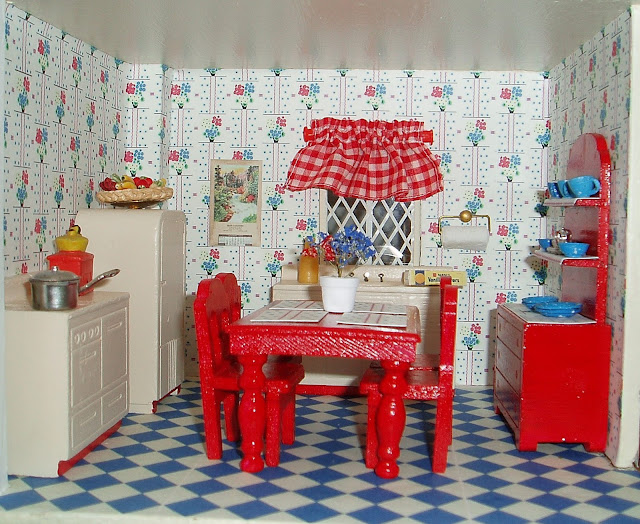 I love this bright and cheery kitchen and  plan to use this wallpaper of red and blue geraniums and the blue checkerboard tile in another little house. The art deco hutch was missing the side pieces which enclosed the shelves, but I like it open showing off the blue graniteware dishes. 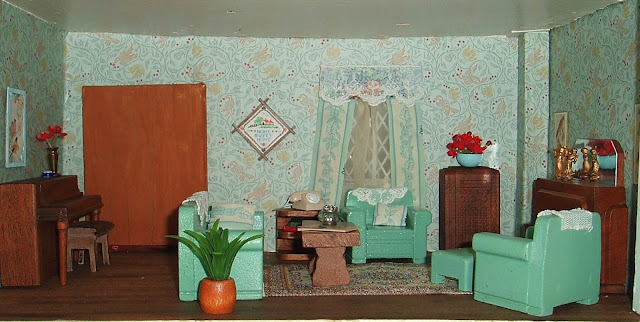 I think the living room is typical of a living room of the 1940s...a radio but no TV...oops, the telephone should be black not beige....antimacassars on the back of the sofa and chairs. Antimacassar....a small covering placed on the backs and arms of upholstered furniture to prevent wear or soiling....named after "macassar oil" that men used on their hair at the turn of the 20th century....thank you Jamie Vance for that information!﻿ 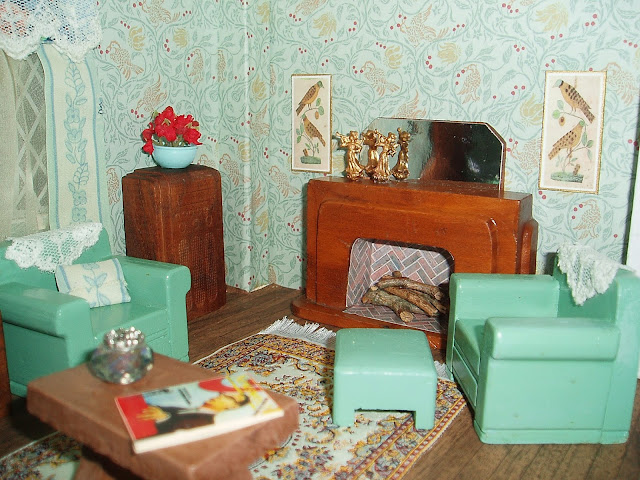 ﻿
Ok, so the ottoman was originally yellow and I painted it to match the chairs. I also added herringbone patterned brick paper to the fireplace and filled it with logs from one of my crape myrtle trees. I love this wallpaper. ﻿ 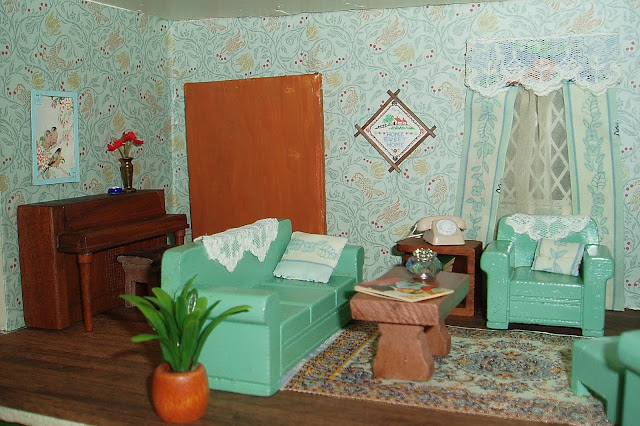 Notice how wide the front door is? It was still attached after 75 years, which is rare.  If you look at the picture of the front of the house, you might notice that the door is off-printed. Other models I have seen of this house have the same flaw in design. The plant is a modern creation from "suebeesminatures" on ebay. 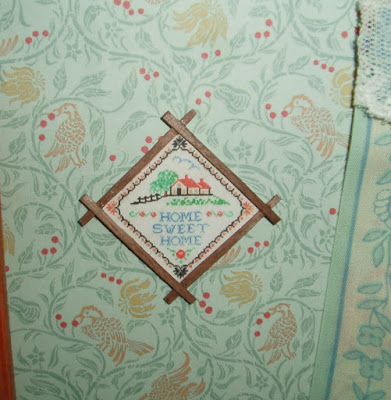 I like my Home Sweet Home sampler too....wonder how many homes still display one in the 21st century? 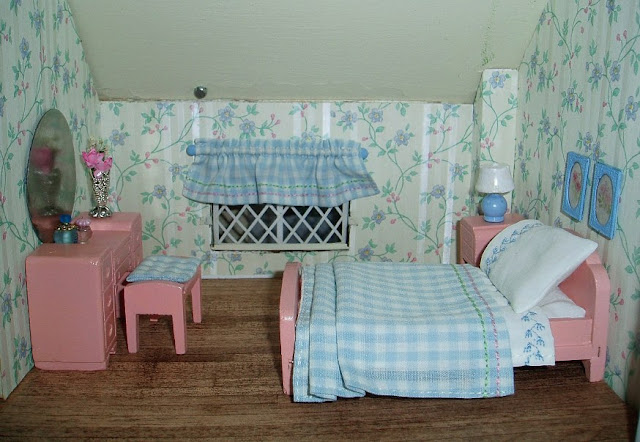 The main bedroom....in shades of pale blue and pink. I took the liberty of painting the Strombecker lamp to match the rest of the décor. 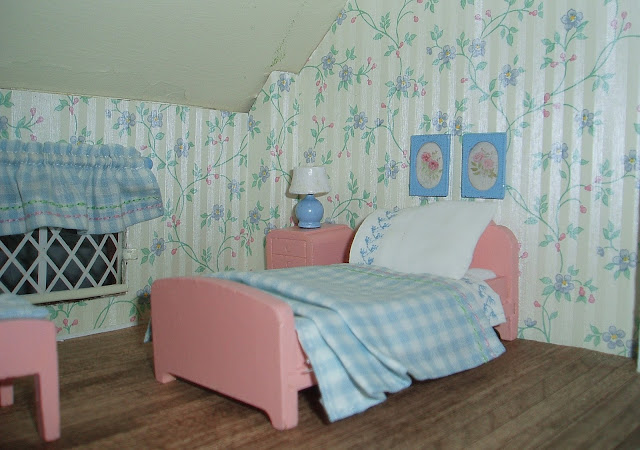 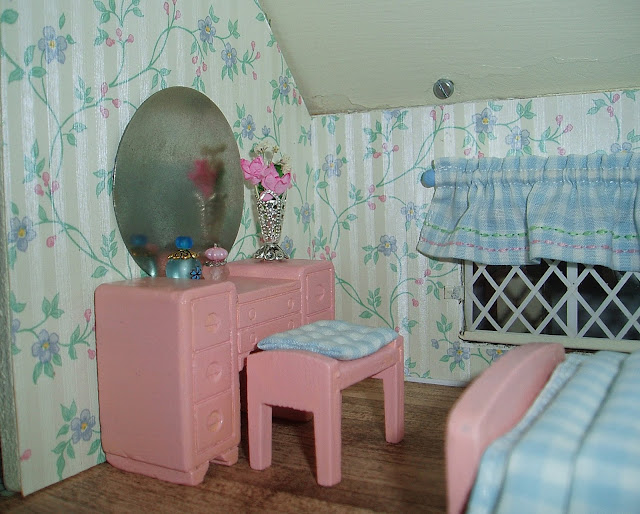 I think the wallpaper is perfect for the 1940s era. 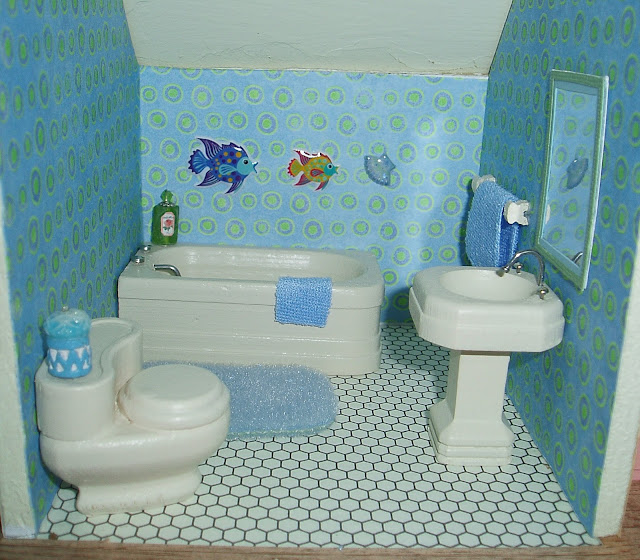 I added the bathroom in part of the space of the oversized bedroom. Many of my friends who are addicted to collecting vintage dollhouses are often in a quandary as to whether they should have a bedroom and a nursery/child's room or a bedroom and a bathroom. This is how we often solve that problem! The partition was made from a discarded wall from a Keystone of Boston house I have....so it is the same age as the rest of the house. The fluffy bath rug is from a jewelry/bead craft mat I purchased at a resell shop; the towel and bath cloth are from a baby washcloth.
﻿ 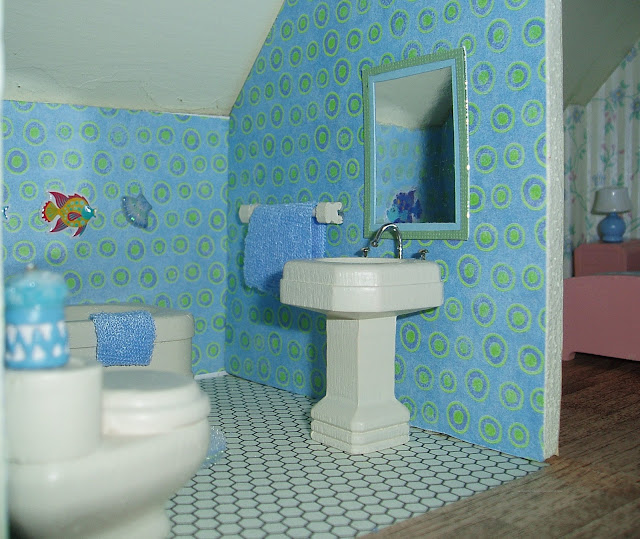 I added the spigots and faucets to the sink and bathtub....finishing nails and small brads from Michaels....so much for keeping things original. J 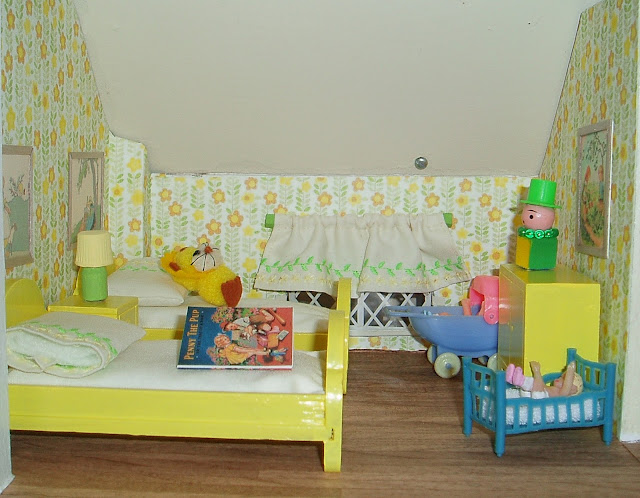 A room for two little girls.....
The wallpaper is Bodo Hennig...made for their modern 1970s era German houses. 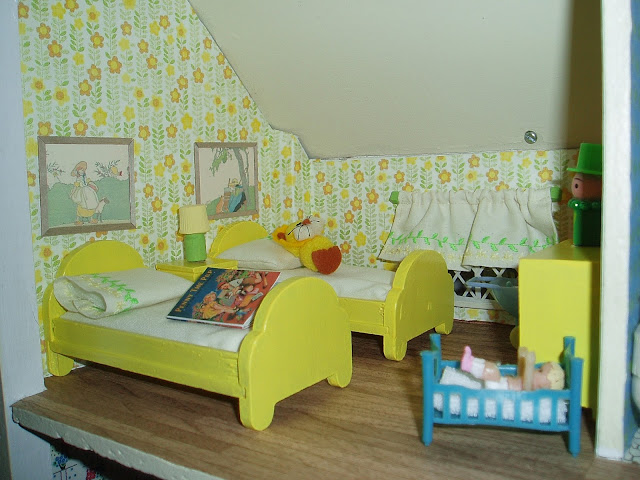 The art deco beds by Strombecker called for some art deco prints in coordinating colors! 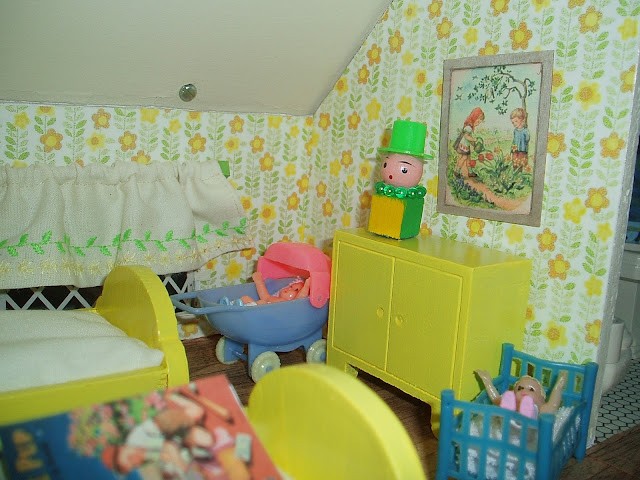 The chest is a buffet from the 1938 Strombecker art deco dining set.

The auction this Rich Toys dollhouse will be a part of is to benefit the
Brazosport Cares Food Pantry
that serves the Lake Jackson, Clute and Freeport, Texas area,
to be held on September 12-13
at St. Mark's Lutheran Church in Lake Jackson, Texas

See the brochures below or visit their website
at www.brazosportcares.org for more information. 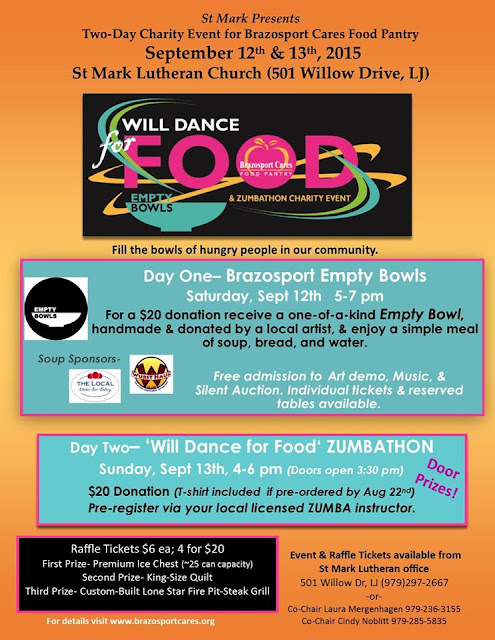 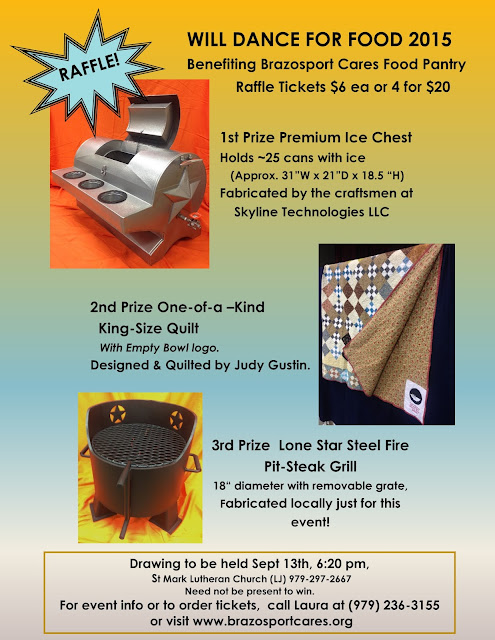