We are....two wild and crazy guys! 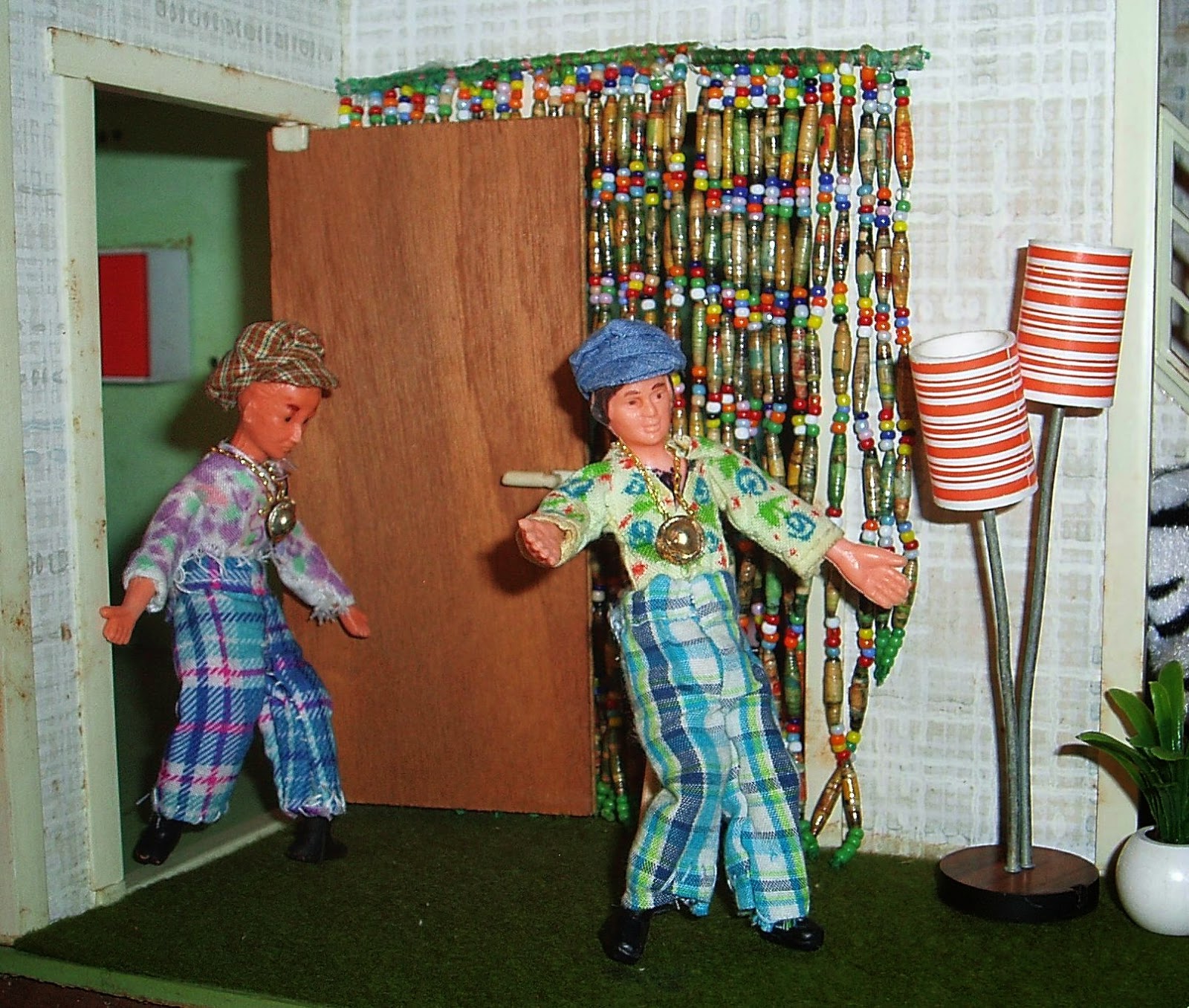 Swinging, the Festrunk brothers enter their bachelor pad.
Yortuk says, "Oh, Georg my brother, there will certainly be a lot of swinging in our bachelor pad tonight!" 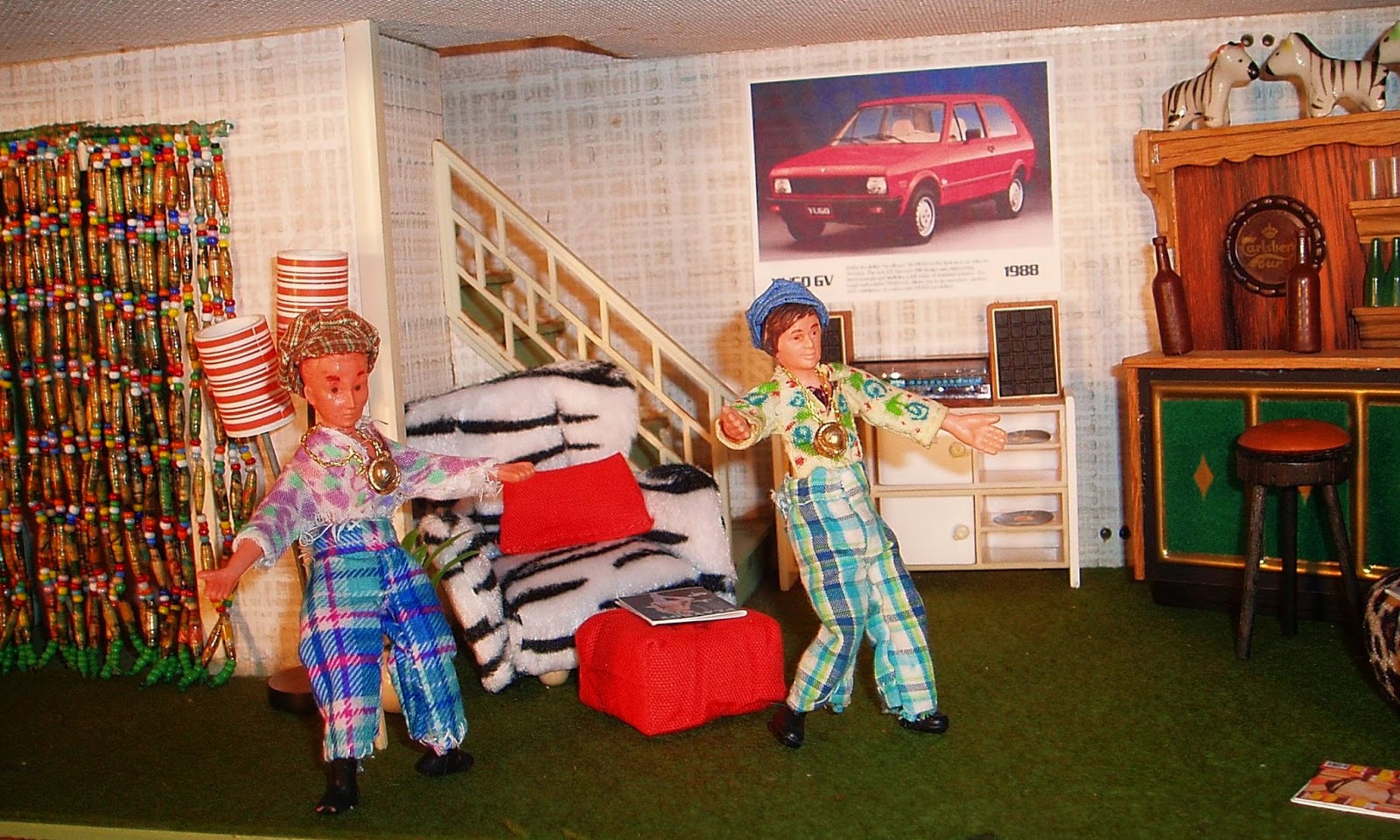 Laughing and swinging, Georg leans back and says, "Hold it! Let's catch some rays!"
"You and what Army!" laughs Yortuk. "Forget about it!"
They swing over towards their wet bar.
"Ah, that fox bar was really something tonight. It was no difficulty to see many swinging Americans enjoying each other a great deal." says Georg. 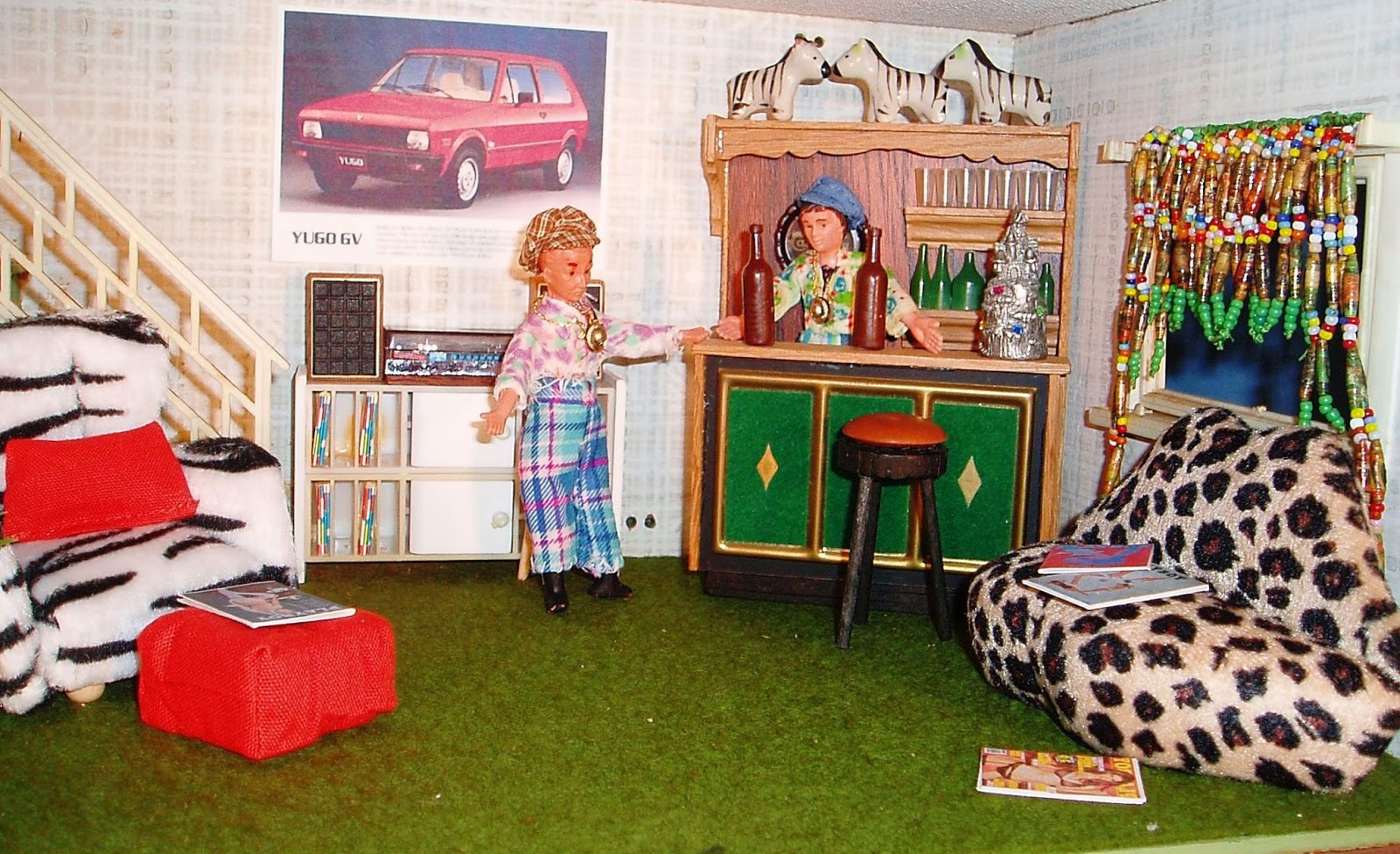 "And here is a thing I will tell you," says Yortuk, "that two swinging foxes have the hots-on for us, and are coming here tonight to let us hold on to their big American breasts!"

Opening two bottles of beer, Georg says,  "Why not? There's nothing preventing them. After all, there is no other pair of Czech brothers who cruise and swing so successfully in tight slacks!" 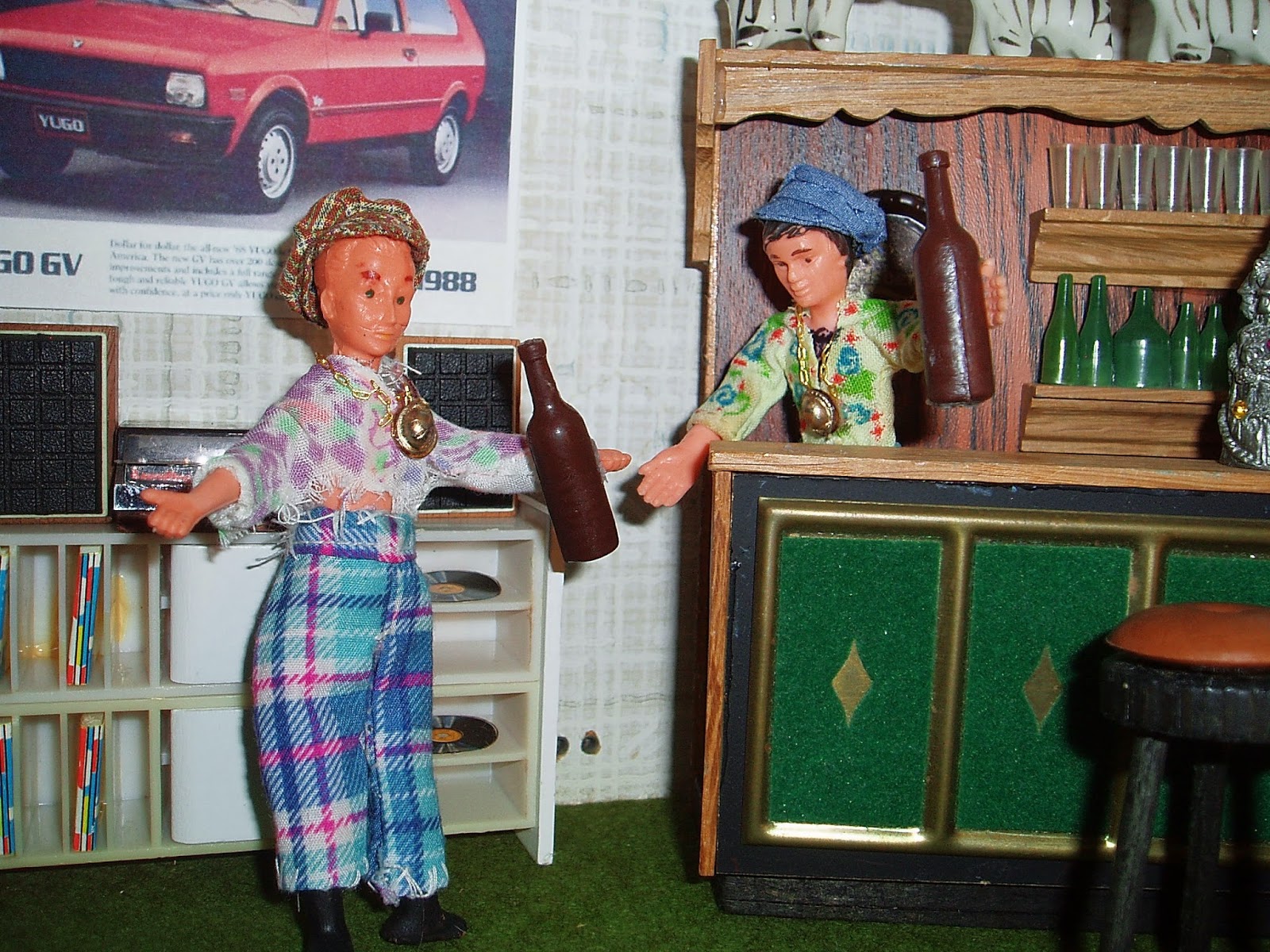 Georg toasts his brother Yortuk, "We are...two wild and crazy guys!"
"Soon, will be the foxes." says Yortuk. And the doorbell rings! 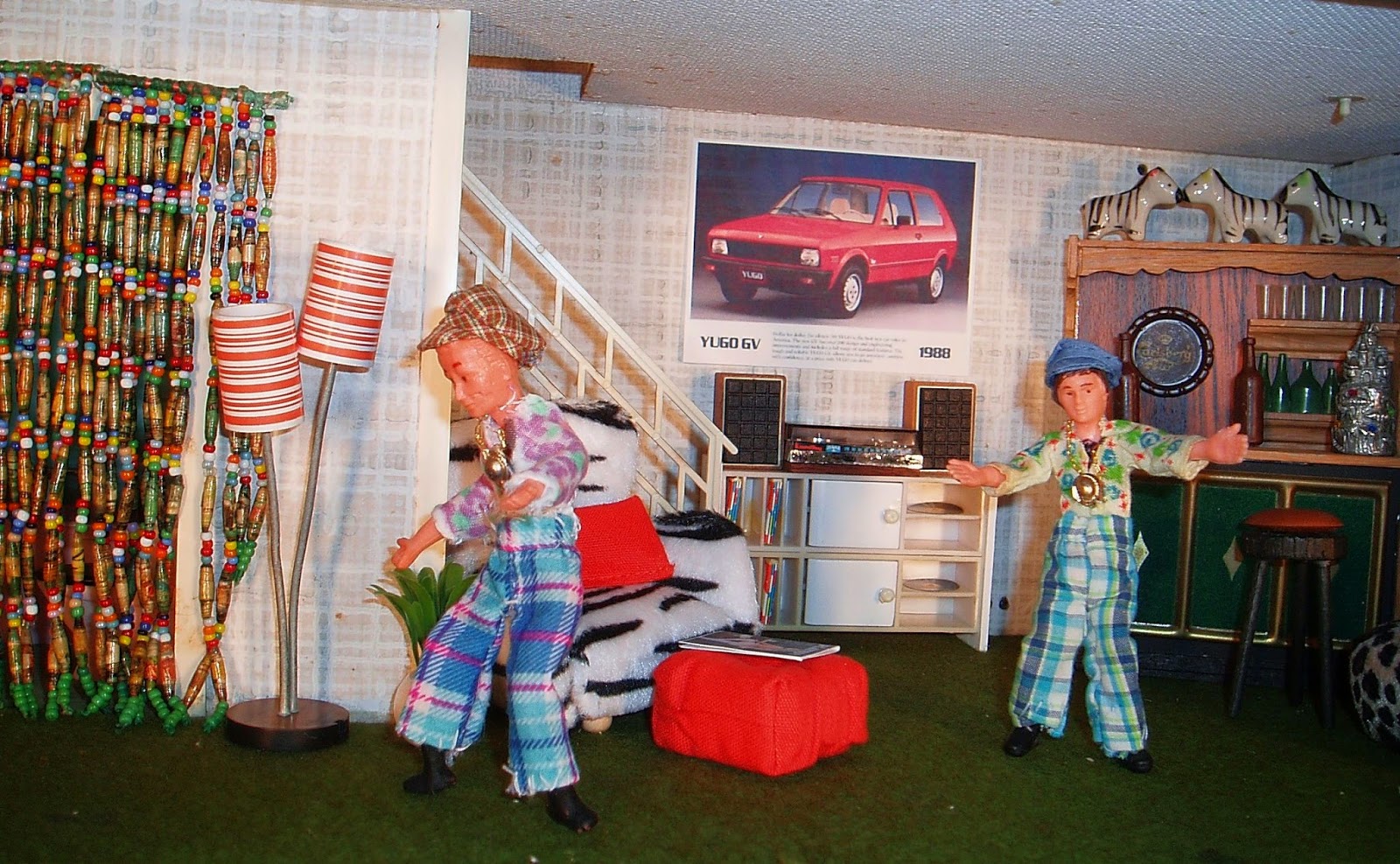 "Fox-es!" they yell and swing successfully to the front door. 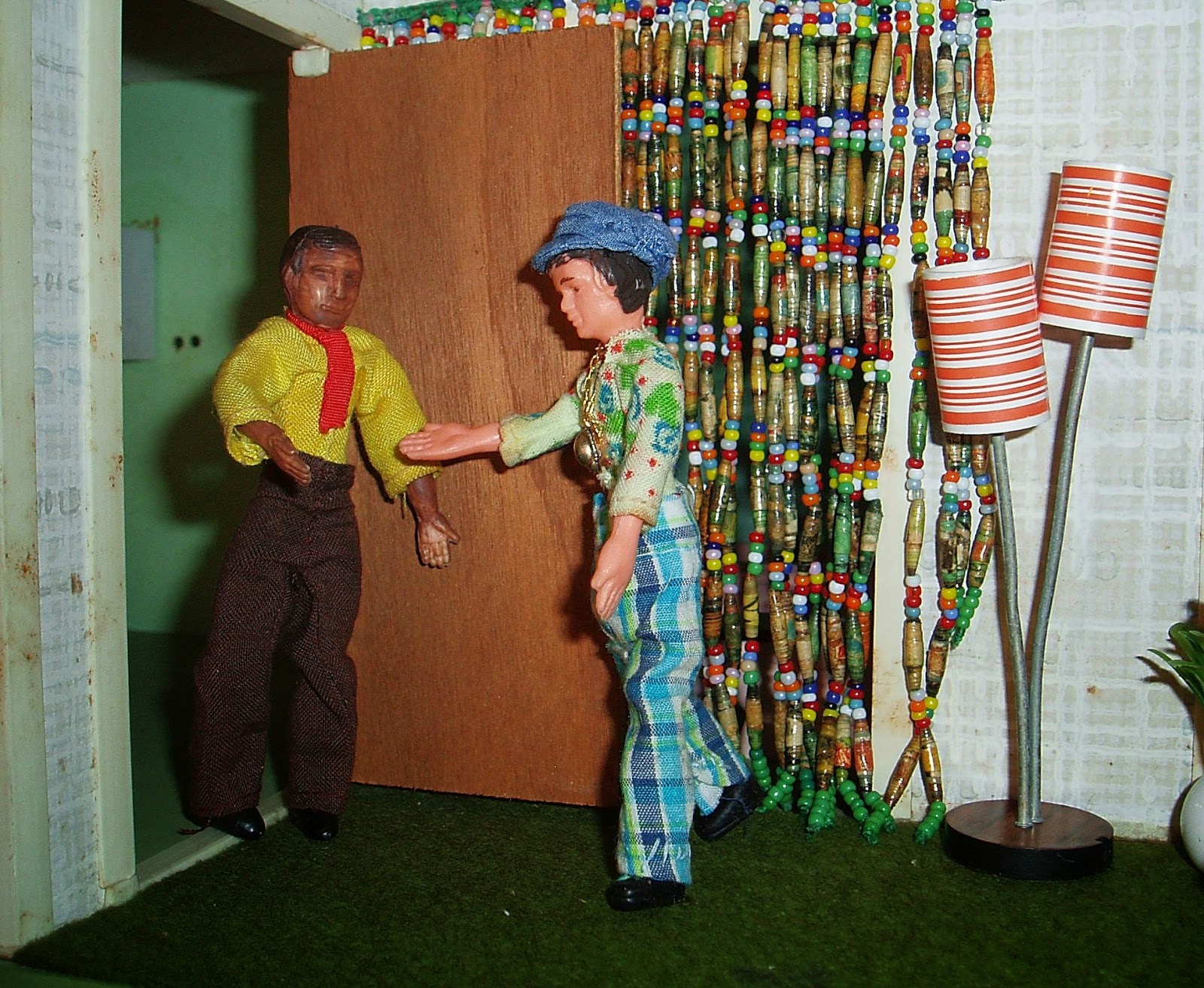 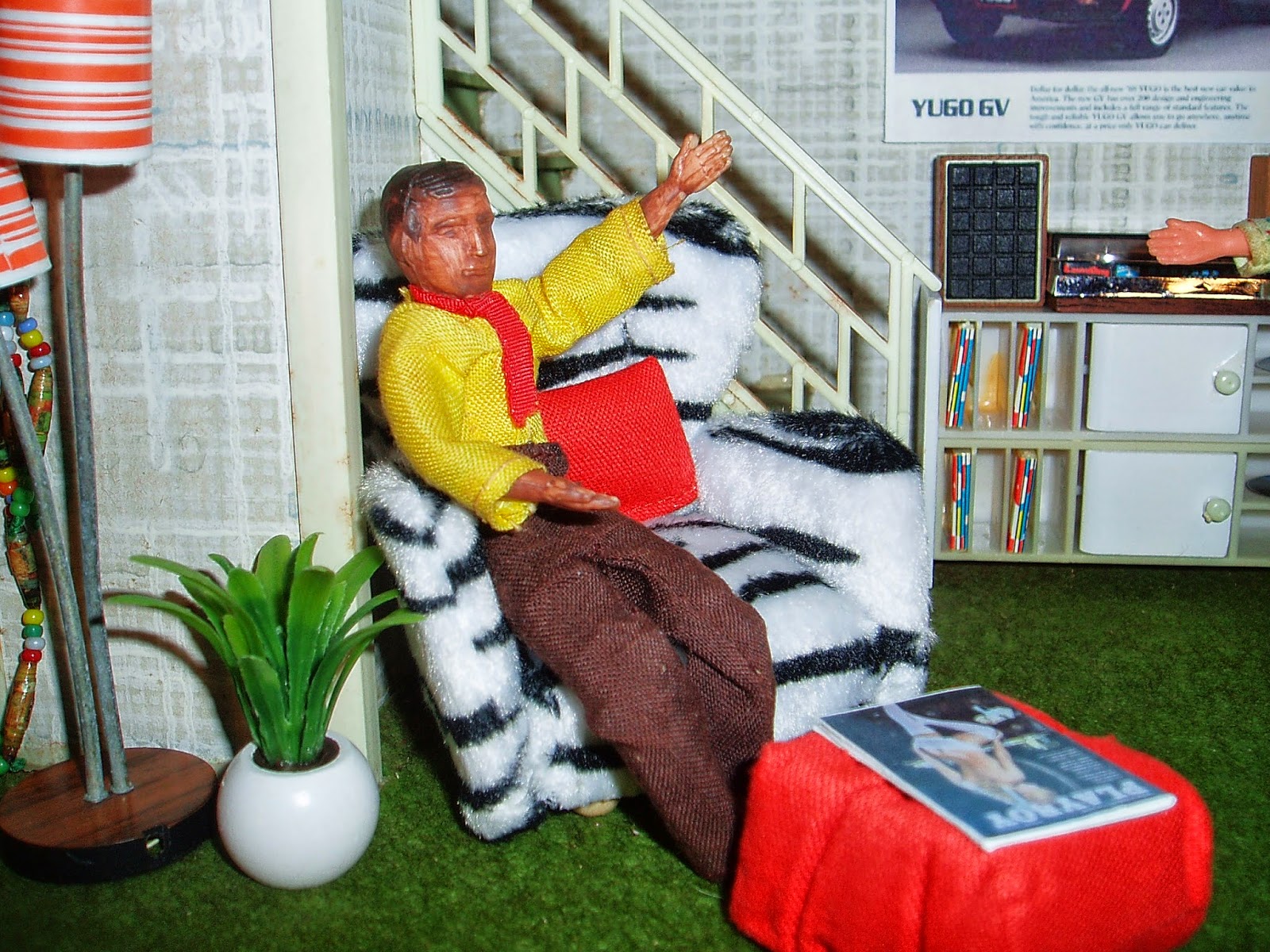 "Hey, man, I was invited to this really hot party tonight. Do you guys wanna go?" 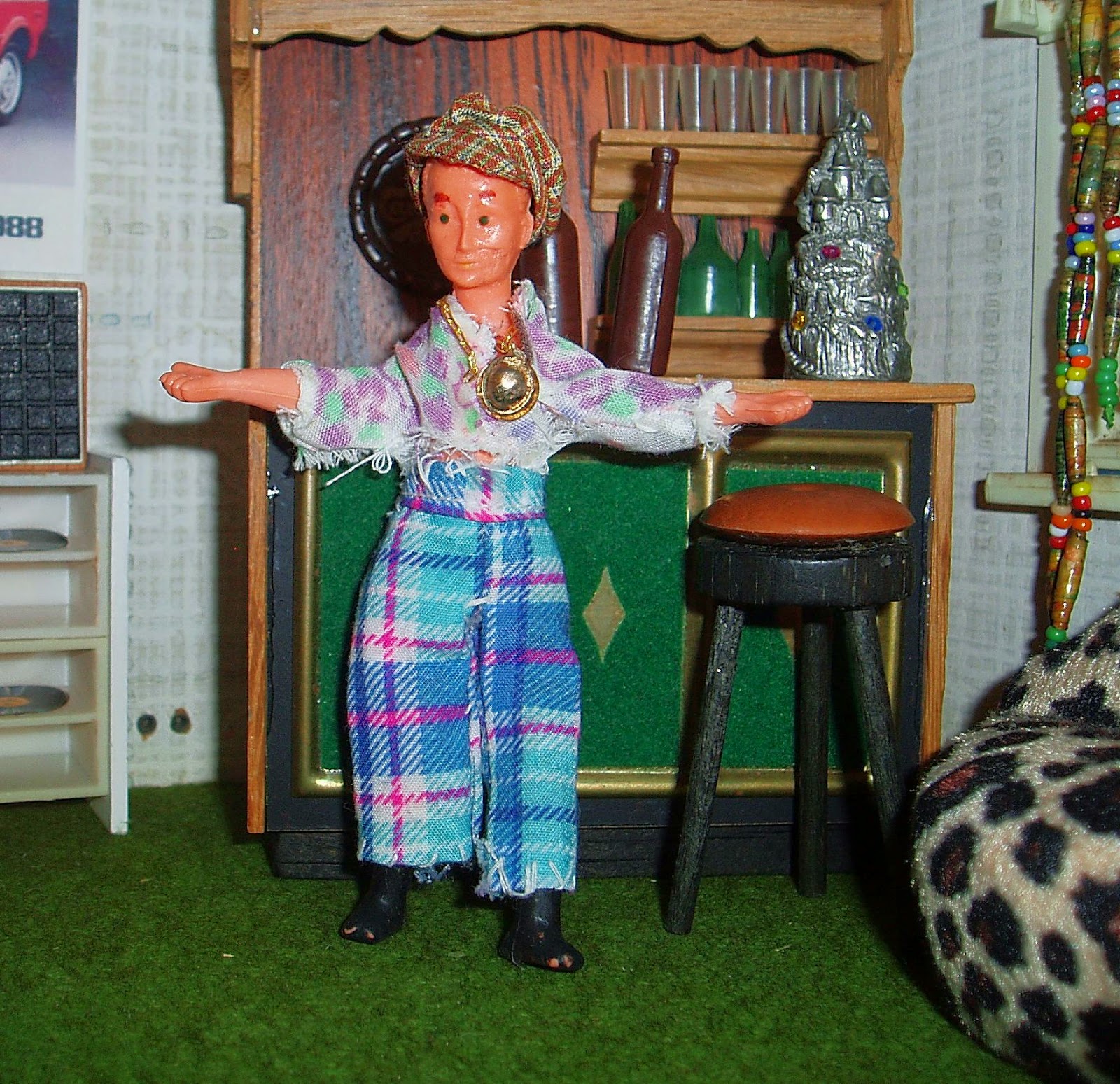 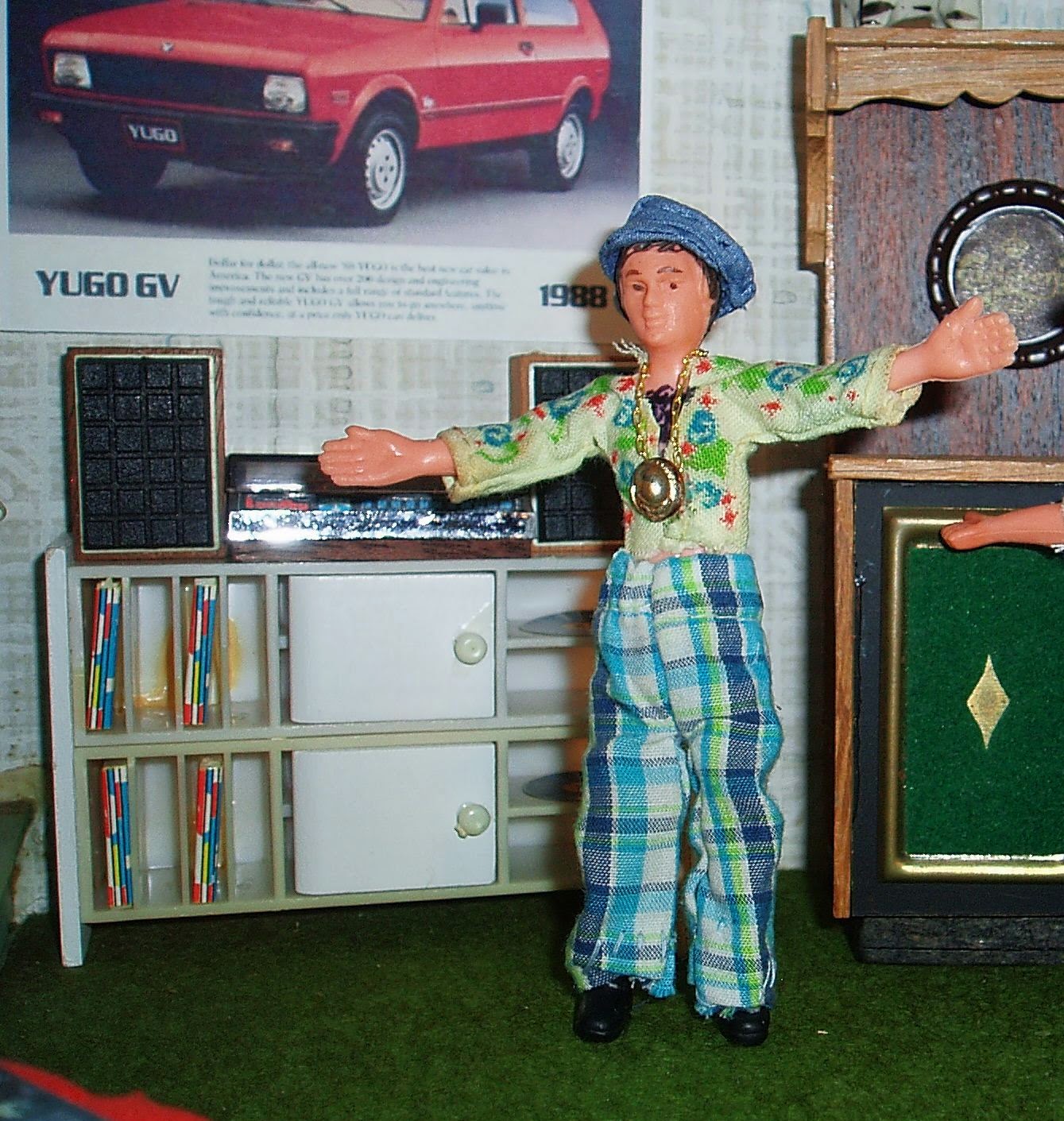 "Don't come crawling to us. Two hot fashion models from the fox bar will be here soon to give themselves to the Festrunk Brothers!" brags Georg. 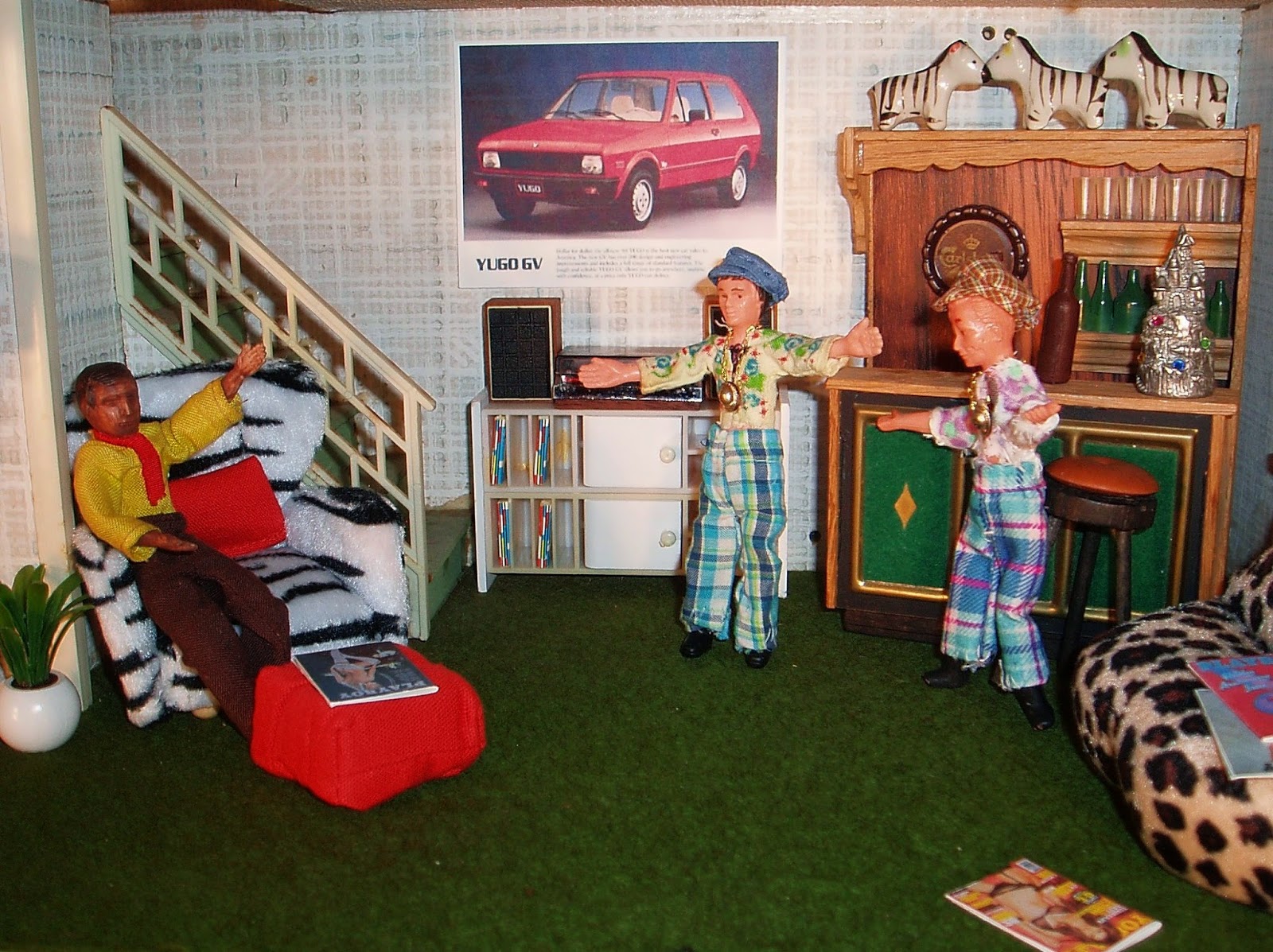 Cliff says "You.. got two ladies coming here tonight? I don't believe it!"

"We cruised for them in our tight slacks which give us great bulges!" smiles Georg.

"Wait a minute.." says Cliff,  "if these chicks were so interested, why didn't they just come back with you, man?"

"Oh, we gave them the address to our bachelor pad. They had to go to the Statue of Liberty to pick up their birth control devices." Yortuk informs Cliff.

"They told us that in America, many American park rangers distribute birth control devices." says Georg.

Yortuk adds "Poor foxes. Every time they are having sex, they must go to the closest national monument." 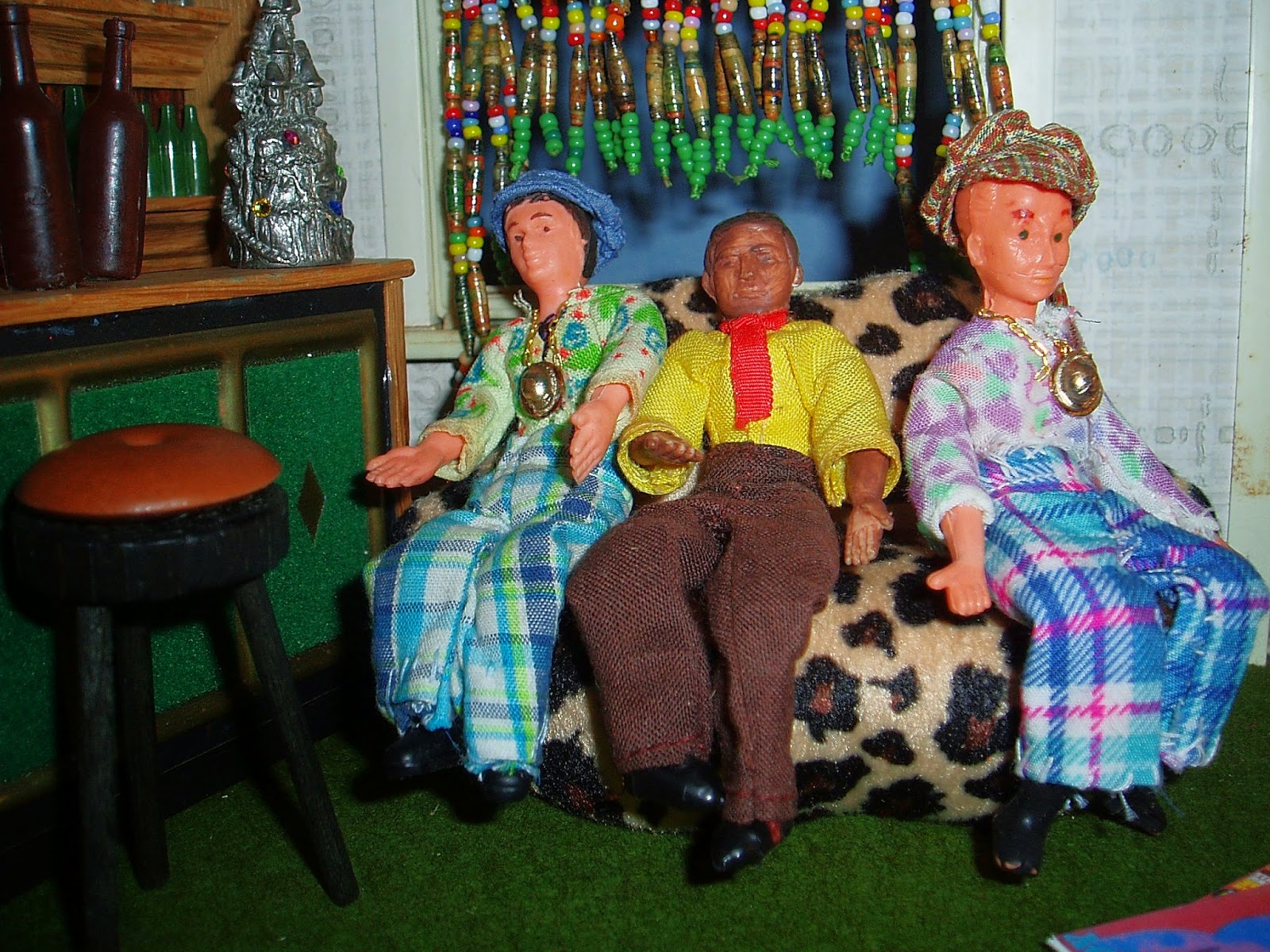 "Who told you that?!" Yortuk asks.

"Man, you guys have been hosed, baby." answers Cliff.

Excitedly, Georg yells, "Hosed?! Count me in!" He and Yortuk laugh. 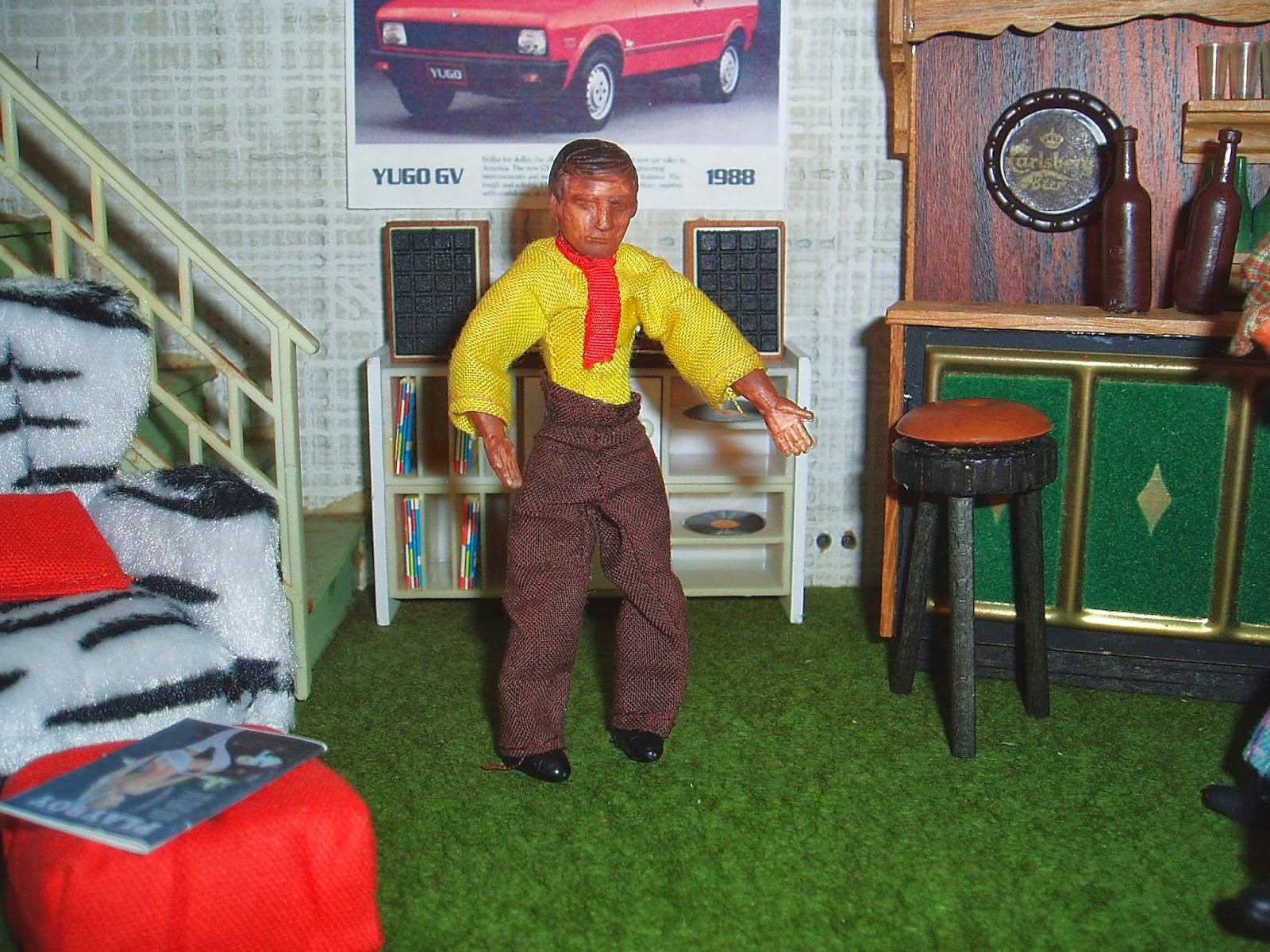 "No, no, no, no.. Uh.. hosed.. tricked.. I mean, they stood you up, man. They're not coming here. These ladies figured, 'Hey, we got these two Czechoslovakian dudes trying to pick us up....what do they know? Let's hose 'em.' These chicks were lying, man." explains Cliff. 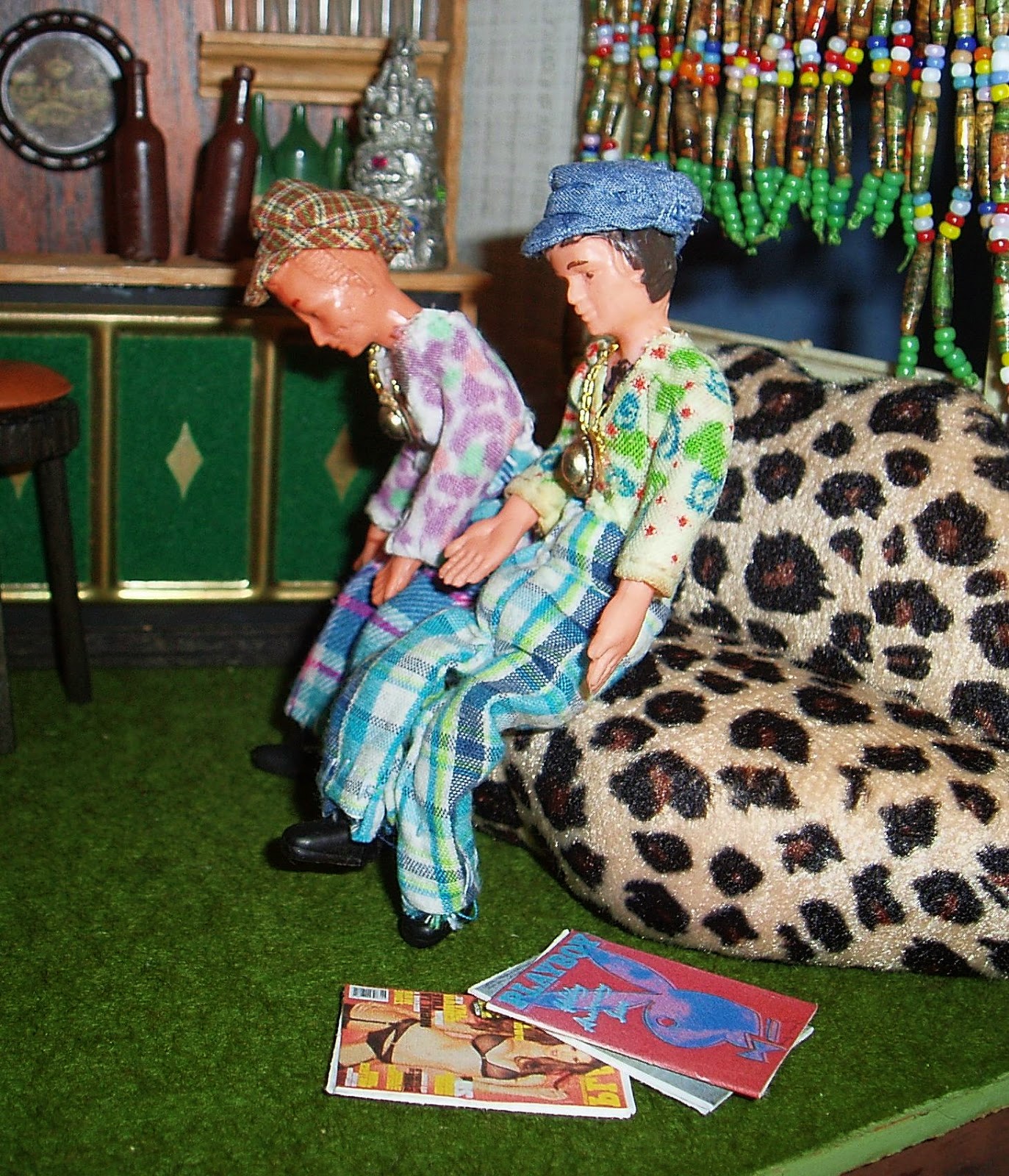 Georg says,  "I blame myself."
"This really bums me out." replies Yortuk.
"We sure have a drag." they say in unison.
"We will never swing again...," says Georg. 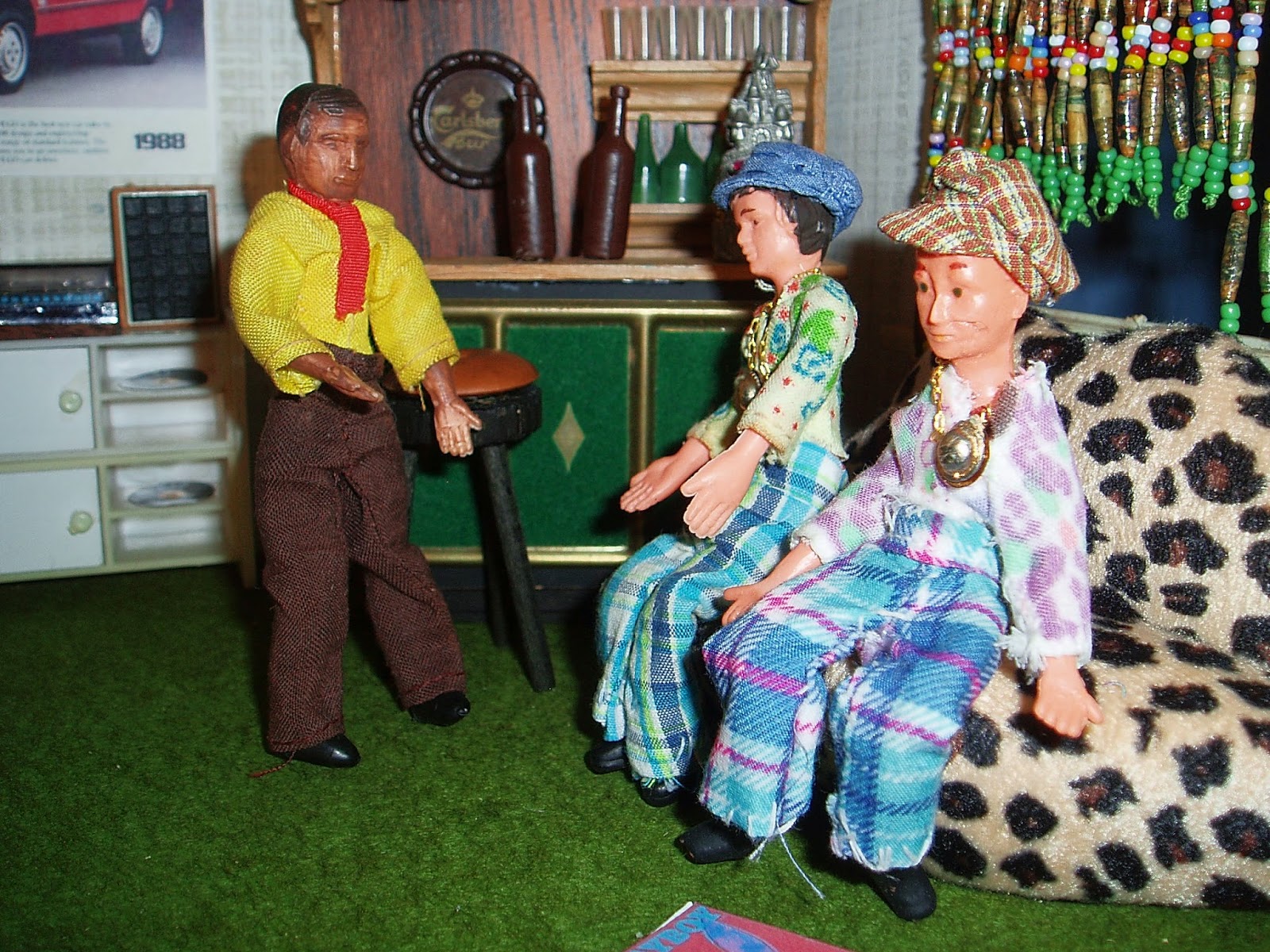 Cliff smiles and says,  "Hey, look.. you're good guys, man. But sometimes you come on too strong, man. Now, when we're out partying, if you want to score with girls, you can't keep running around yelling.. Let's swi-i-ing! You wanna swi-i-ing? Man, you gotta be cool, man! You're in America! This is America!" 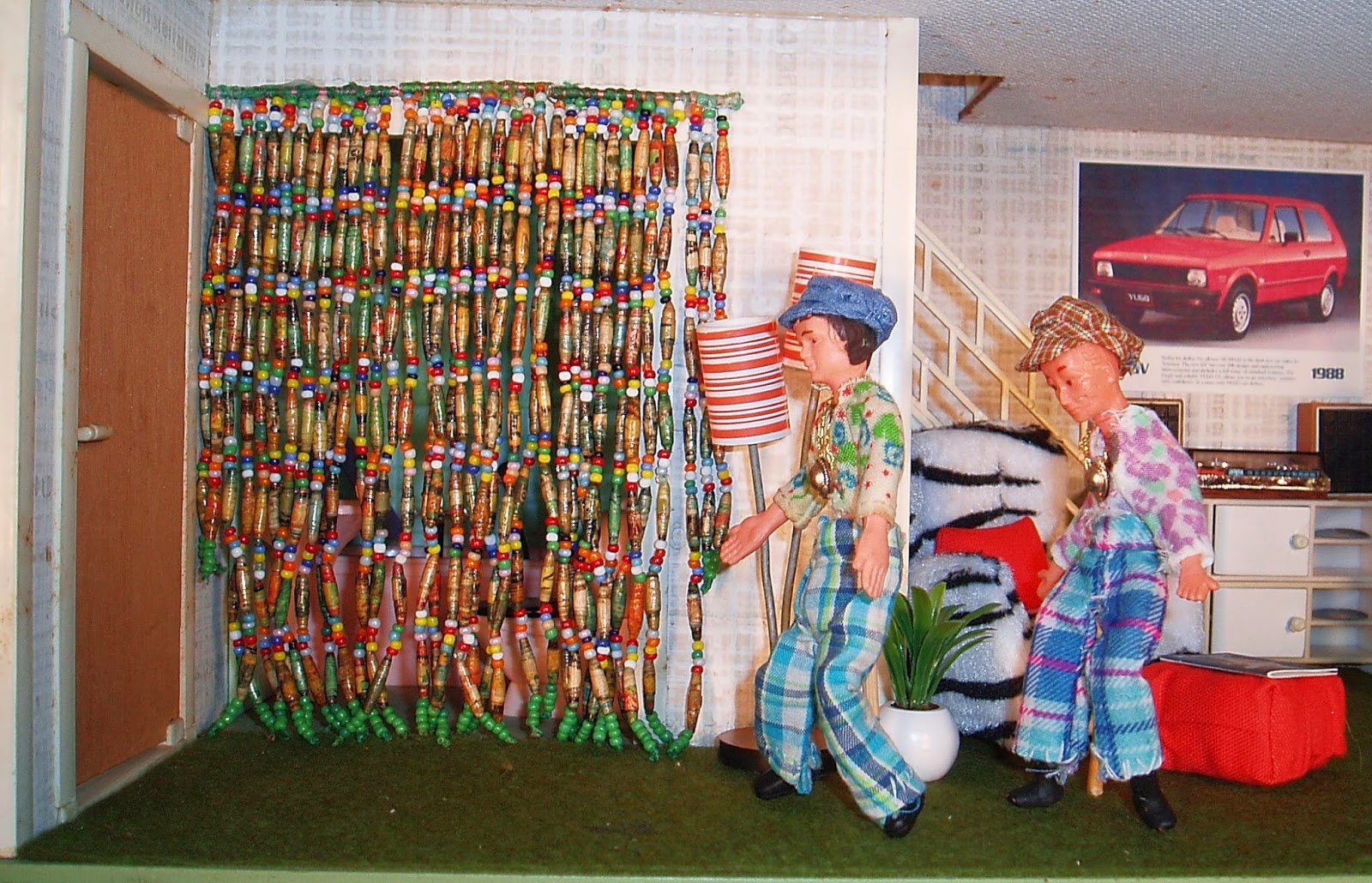 "Who can this be?" asks Yortuk. Georg and Yortuk move slowly to the door, barely swinging. 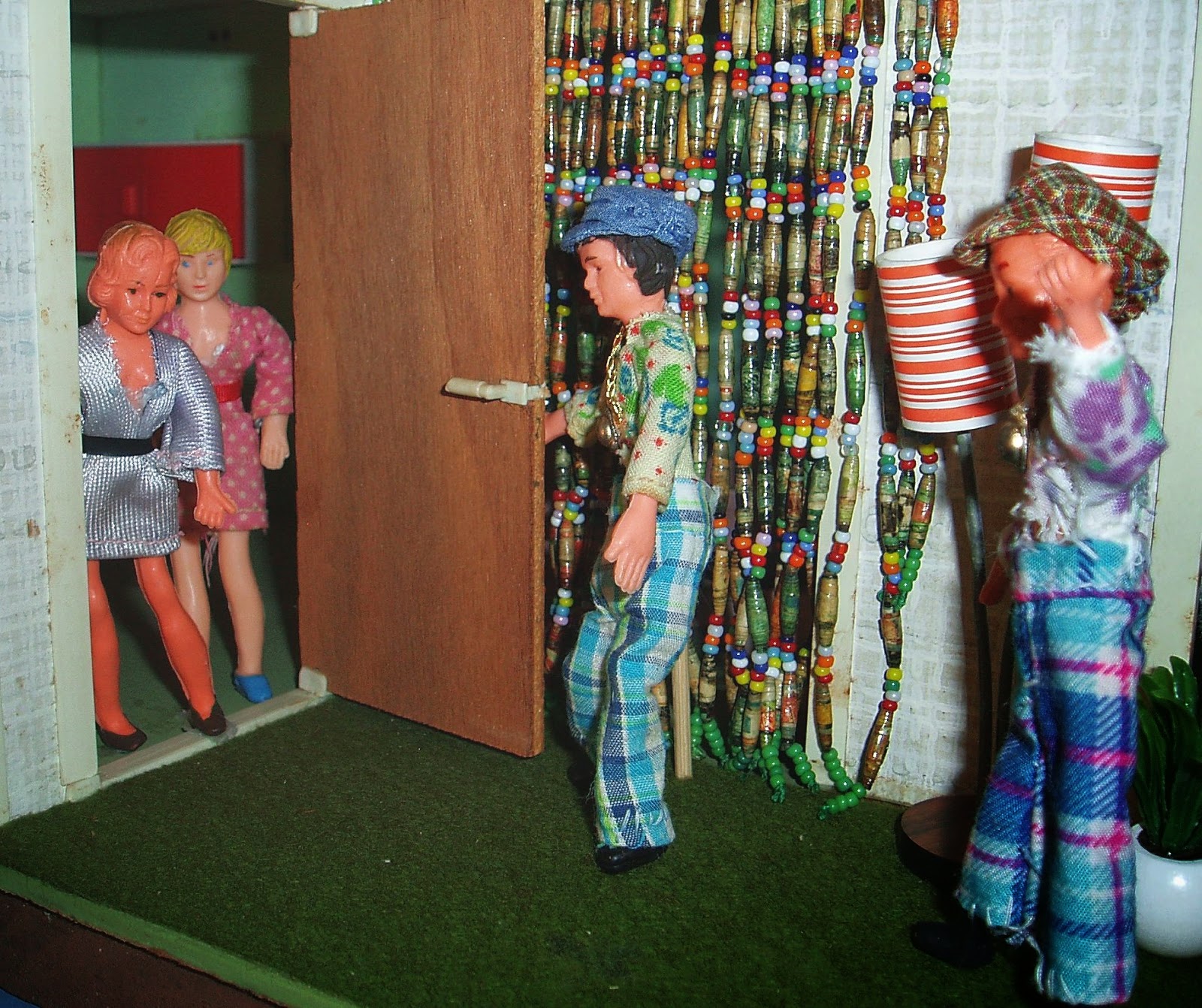 "Now are the foxes!!" exclaims Yortuk.

"Hey, foxes! Clean up your act!" says Georg, and he and Yortuk laugh. 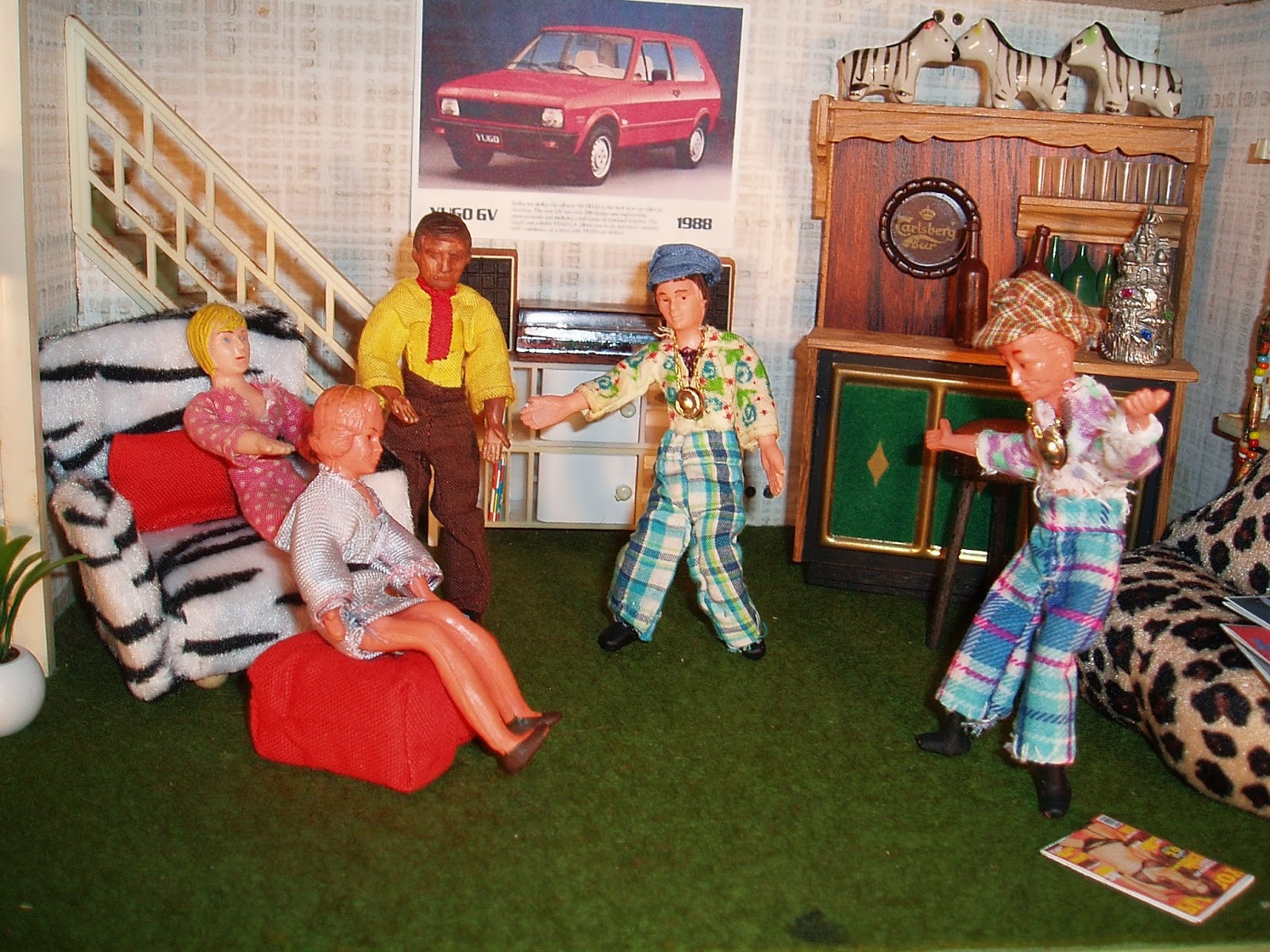 "Okay! How many astro-sign medallions can you wear?" asks Georg.

"Next time, try five of them!" interrupts Georg, laughing with Yortuk. "So, now you know. We are.. two wild and crazy guys!" from both Yortuk and Georg. Thanks to my friend Myrtle Mayhem at Dollhouse Shenanigans for finding the Festrunk brothers on ebay and sending a link to me with the subject line "2 wild and crazy guys!"  When they arrived at the Village, they sported just wild slacks and white shirts. I added prints to their shirts, caps, medallions, hair on their chests...and of course their bulges!

And thanks to Saturday Night Live for the story line and basic dialogue AND for entertaining us all these years!

This is a Brio house from 1969. Furniture, with the exception of the couch, is by Lundby.