Radios....I have radios, lots and lots of radios!

Children of my generation learned to use their imaginations well because, before TV, the most dominant home entertainment medium was the radio. I remember lying on the floor in front of the radio listening to concerts, musical shows, dramas, comedies, and one that threatened to "catch you in the jaws of a vise". My imagination always made me worry about that one. 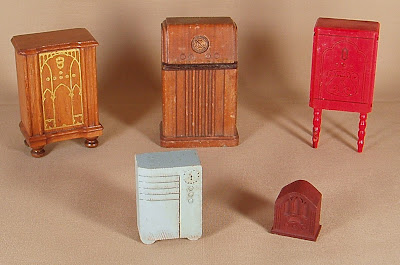 These radios were made by Strombecker. All radios on the back row are 1" scale; from the left, the dates of production were 1936, 1938, and 1931. The art deco blue radio, part of their "Modern Design" line, was first marketed in 1938. The table radio was listed in their catalog in 1934. 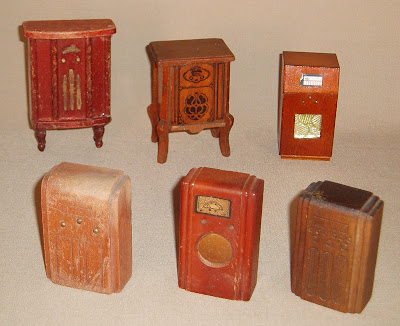 Other dollhouse radios marketed during that period and later were...
first on the back row left is the US Menasha Woodenware radio from 1934;
US Converse produced this radio as part of their "Realy Truly" dollhouse furniture starting in 1931;
this radio was made by UK Barton around 1957.
On the front row is a radio made by US Nancy Forbes circa 1940;
US Kage made this radio from 1938 to 1948;
this last radio was probably made by US Strombecker during the mid 1940's.

Plastic dollhouse furniture became popular after World War II. The 3 radios grouped on the left were made by Renwal. The open drawer housed the phonograph...this is almost an exact replica of the Philco radio that my family had in our living room. I remember when I was old enough to play my colorful cardboard records on the phonograph without supervision. I sometimes see old cardboard records on eBay. :)
The next two radios are almost duplicates...the dark radio was made by US Ideal and the brown one by Canadian Reliable. The only difference is each radio has their brand name posted on the front above the dial. In Zillner's Furnished Dollhouses 1880-1980 she says that "Reliable was licensed by the Ideal Toy Co. to copy some of Ideal's products." That explains the identical radios. The last radio was made by Jaydon during World War II. 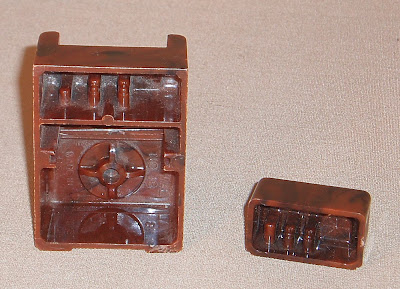 Not only did Renwal have a phonograph in the opening drawer, they also had radio tubes and speakers as seen from the back!

Between radios and TVs...there were combos

Combination TV/radio/phonographs were popular starting in the 1950's. Some units had only the radio/record player available, but as the popularity of television grew, many units had all three built into one cabinet. Here are some of the ones I am lucky enough to have in my doll houses....

The console on the left is a German music box that plays Kerzenwalzer, or Auld Lang Syne. On today's blog, http://diepuppenstubensammlerin.blogspot.com/ has a catalog picture of Bodo Hennig furniture showing this radio, so it's possible this is a Bodo Hennig product. On the right is a radio made by Lynnfield-Blockhouse during the late 1940's or early 1950's. 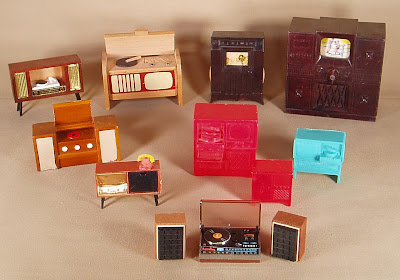 On the back row left is a Barton radio/phonograph console circa 1970's. The small dark plastic TV/radio unit was made by Plasco, 1948. The large dark plastic console was made by Ideal for their Young Decorator series in 1951. Marx made the 2 red units, 3/4 and 1/2 scale, while the aqua console is Canadian Eagle. In front is a Lundby radio/phonograph. 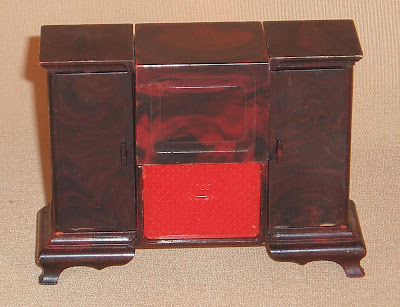 In 1947, the Ideal Company produced and sold this dollhouse console as one of their specialty pieces. 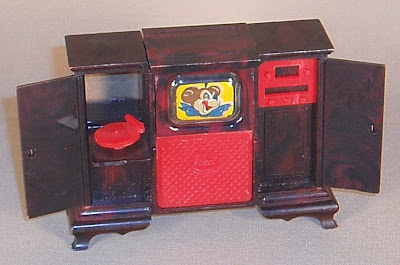 The door on the left opens and the phonograph flips down; in the middle the TV flips up; and on the right the door opens to reveal the radio.
Posted by Florine at 7:07 PM 2 comments:

...and TVs for the younger set!

For you youngsters under 60 who never lived in a house without a TV, here are a few of the sets that furnish my little houses.....

All of these TVs are made of wood with stickers or plastic parts.
Back row from left,
a 1970s TV from Hall's Lifetime Toys;
white TV from Strombecker circa 1960;
large cabinet TV made in Germany and imported by the toy store FAO Schwarz in 1966;
this TV came with other Dol Toi furnitue, but one very similar is shown in Marion Osborne's book, Barton's "Model Homes", circa 1959;
unsure of maker but could be Barton or Dol Toi.

Front row on left also shown in Marion's book as being made by Barton 1970s; unknown maker on this TV, made of plastic with wood veneer strip casing.  UPDATE: Thanks to Sue Freebern who helped identify this last little TV as a Lundby product from 1960!

Marion has written 3 very informative dolls house books; in addition to the Barton book, she has Lines & Triang Dolls Houses and 1914-1941 A-Z of Dolls Houses. Information on purchasing these books can be found on the http://dollshousespastandpresent.webs.com magazine website. 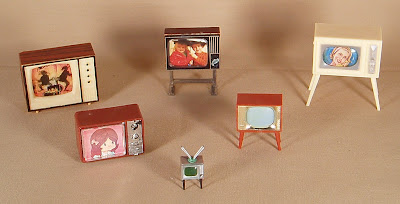 I'm sure everyone recognizes the Lundby TV in the middle of the back row. The white TV on legs was made by Marx for their Little Hostess line. The tiny TV in front belongs to a 6" wide Japanese house that came free, room by room, with some type of soup or sauce mix.


Now to get all these little radios and TVs back into the right little houses.....
Posted by Florine at 6:16 PM 3 comments:


El gato likes to sun himself on the veranda, right under the bird house, of course. The porch set and the potting sink are both Hogarin/Modisa products. 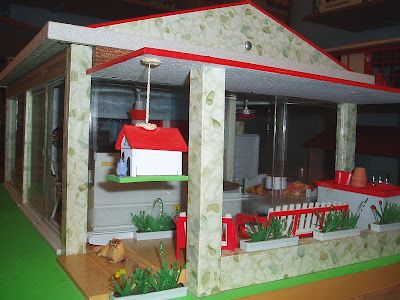 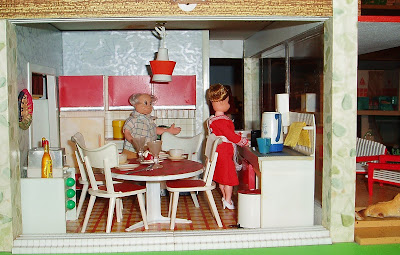 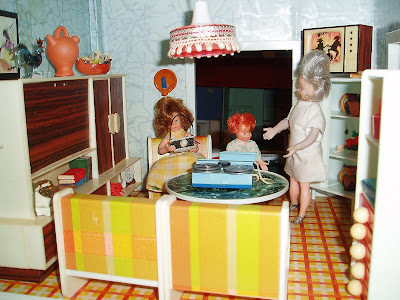 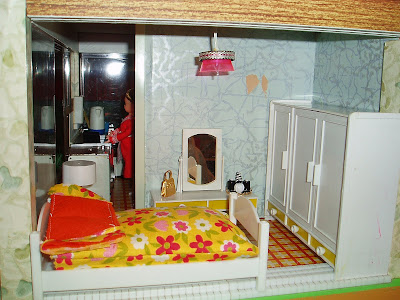 Abuelita Rigoberta is asking little Rocio to sing her favorite song, "Wow Wow Wubsy" so she can record Rocio on her reel-to-reel tape-recorder (from the same era as Abuelita's boufant hairdo). Consuela has decided to have a cup of coffee and visit with Senor Felipe. 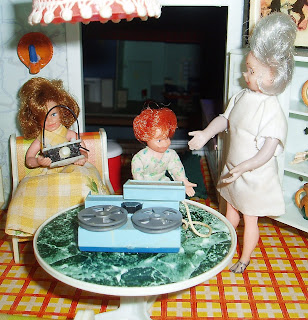 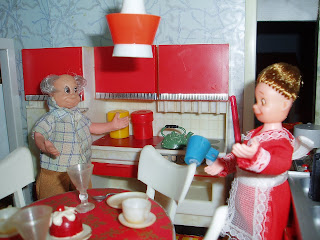 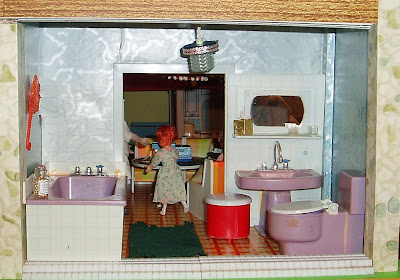 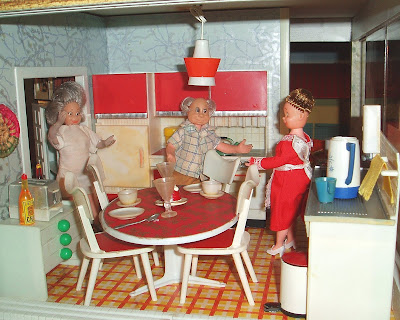 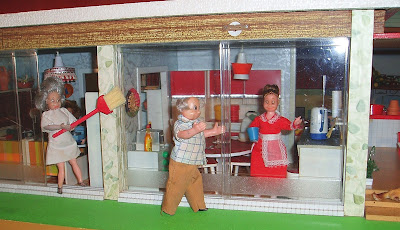 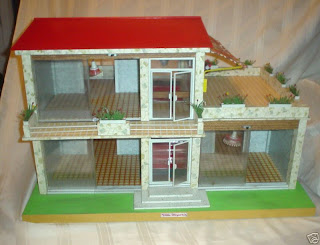 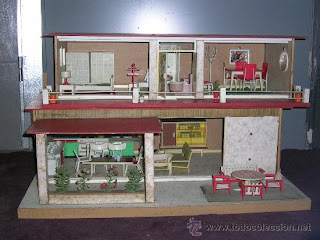 This one was labled Casa Hogar. 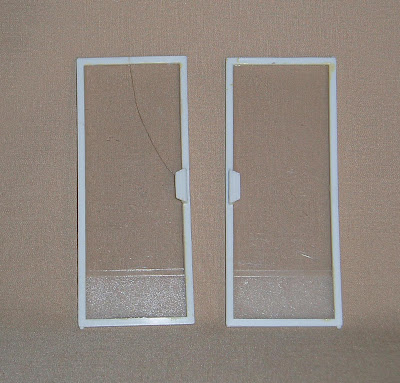 I have a pair of doors that match the ones on the 2 story Hogarin houses. One door is cracked, but all fitting pegs are still intact. If you are in need of a set, please contact me!