Schoenhut Malibu and its Twin House: a tale of two Art Deco dollhouses

This is a guest post from my friend George Mundorf whose large dollhouse collection includes many wonderful art deco dollhouses. This is his Malibu art deco house built by Schoenhut in the late 1930s...but wait, he has another house almost exactly like this one. I will let George tell you the story of his two houses.... 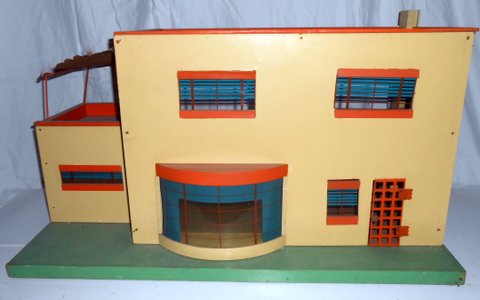 It was on a dark and stormy night...well, no. Actually it was on a sunny, summer afternoon in Kutztown, Pennsylvania, that I stumbled upon an Art Deco dollhouse in the basement of an antique shop. At the time I knew nothing about dollhouses, much less the Schoenhut company, but I was intrigued with Art Deco architecture and knew the actuality of owning a real Deco house was not in the cards, but a miniature one...?

It was not in the greatest shape. A couple of windows – wooden surrounds included – were missing, as well as most of the celluloid “glass”. I got it home to Manhattan, and spent a lot of my spare time building the window sills (a series of flat pieces of wood put together with slits to hold the plastic “glass” and to fit on top of, and below, the Masonite wood walls), and had the windows replaced.

The celluloid “glass” have brown partitions and blue blinds printed on. I don't remember if I had them professionally made or did it myself with model tape on clear plastic. They came out so well, I tend to think I had them done, but can't remember. 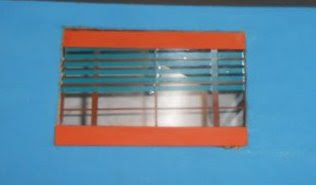 I later found out that my house was a very hard-to-find Schoenhut dollhouse. It is a creamy yellow with orange trim and a blue and orange striped awning over the second story patio which, fortunately, was still attached to the house. 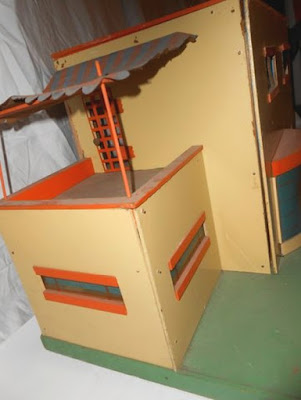 There is a bow window with orange roof and that luckily was in perfect shape. The bow window has blue drapes printed on the “glass”. 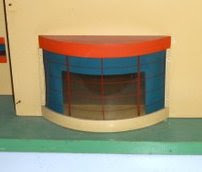 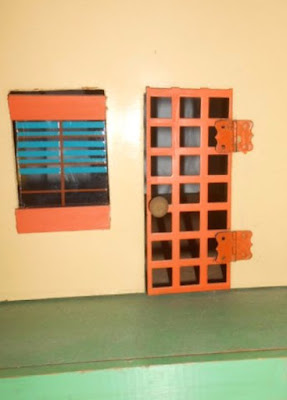 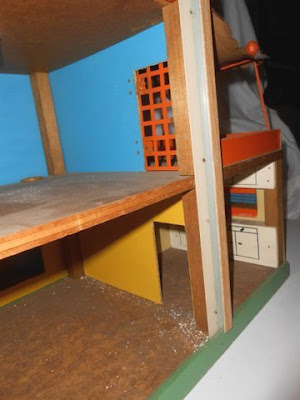 
The orange color paint was surprisingly easy to match for the windows. The dowels holding up the awning were missing but that was an easy fix. Inside, the house is not very detailed, though the walls on the bottom floor are yellow and the second floor is in blue. 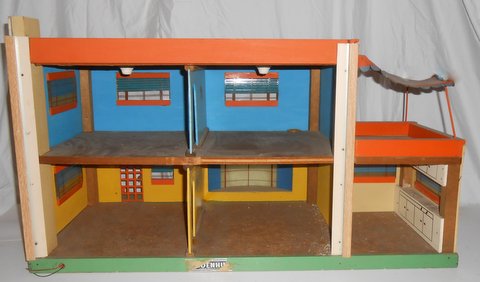 The house is electrified, and the light bulbs in the center of every one of the five rooms have surrounds which are white. All electric wires are hidden within the individual floors themselves, so are not visible. 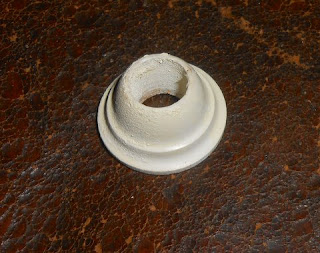 The kitchen in the separate wing, has, along the top and bottom of the right wall (from the back), two strips of wood, painted white. Illustrated in black, the boards have four pair of inoperative cabinet doors (two on top, two on bottom) and two burners for a stove and small (perfectly flat) sink. You have to provide your own refrigerator. 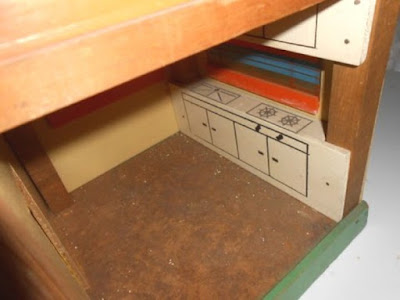 There are two arched doorways – no doors – between the rooms and a squared off door leading into the kitchen wing. 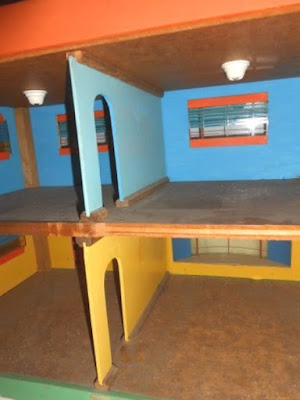 The floors are brown, the color, I believe of the original Masonite. The house is on a green textured base which is trimmed in green painted wood. 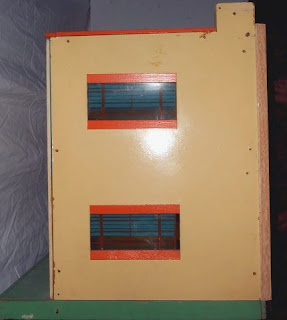 right side of house

Schoenhut made three Art Deco dollhouses in 1937. My house was the mid-priced “Malibu”. The most expensive (and very impressive) house was the “Beverly Hills” and the least expensive was the “Long Beach.” While the Beverly Hills is extremely rare, ironically the cheapest one is rarer still. No one I know has ever seen one in person. 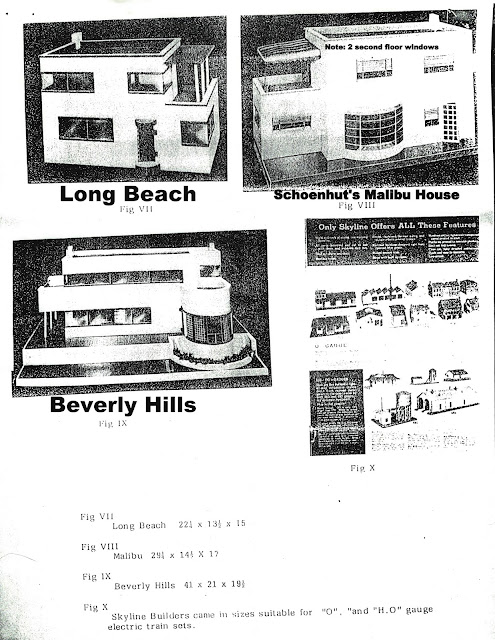 The rarity of the Schoenhut Deco houses – and really, all Deco houses made by other manufacturer's (for example Rich Toys, Tri-Ang, J.J. Anthony, Built-Rite) – might be accounted for by the Depression and the extreme nature of the design. Little girls may not have wanted to receive, nor play with, such an odd, untraditional house. Then, as now, other designs – Colonial, Plantation, Tudor – were more acceptable. Art Deco houses weren't common in real life either!

Without going into too much detail, Art Deco started out as a highly decorated, and expensive style made for the rich and truly Avant-Garde. Buildings were of the skyscraper type, with minarets and bold facades with stair-step levels. Real Deco houses from this period are so rare as to be non-existent.

With the coming of the Depression, the design took a non-decorative, simpler, streamlined approach which was easily massed-produced and inexpensive. Manufactures of practically everything could produce new and seemingly up-to-the-minute products by eliminating costly decoration. It is this period, from about 1930 to 1940, that the Art Deco (also called “Moderne”) architecture affecting real homes and the subsequent dollhouses that is relevant to the Schoenhut dollhouse.

The Schoenhut house has the following Deco characteristics:

1. Simple geometric shapes. In this case, the house appears like two boxes, one square and one rectangular, put together. There are no towers, dormers, wrap-around front porches, cone-shaped roofs.

2. There is little decoration. There are no shutters, window boxes, attached to the wall sundials, half-timbers, gingerbread. This is one serious house!

3. There is a second story patio. 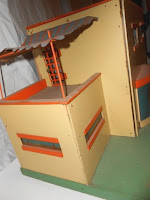 4. The emphasis is on the horizontal – note the extra long windows. No Gothic and Victorian “reaching for the heavens.” The earlier deco skyscraper vertical influences are now in the past. 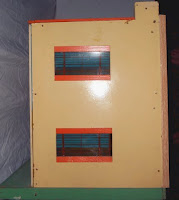 5. The color scheme: blue and orange is hardly traditional for a house – but the World's Fair of 1939 used those same colors as part of its design. We tend to think of Art Deco in terms of white and pastels. Not necessarily true – a very Deco house in Florida was navy blue. 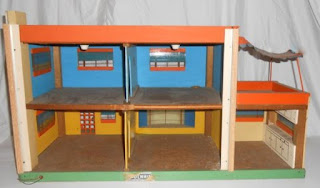 6. The use of Venetian Blinds as a visual design element. The blinds emphasize the horizontal and also are reminders of “speed lines”. (Think of a cartoon speeding car with the lines trailing the car indicating speed – another Deco characteristic). 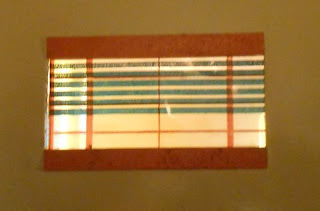 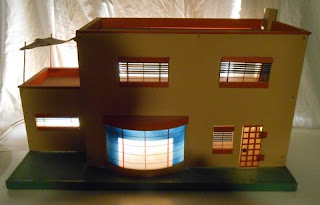 Other Deco architectural detail found on other dollhouses from this period are circular windows, an exterior staircase, a series of parallel horizontal lines (those “race” lines yet again!) used somewhere on the house, “eyebrows” over windows or doors (little, basically useless shelf-like protrusions), glass brick, and windows meeting at the corners of the house.

So I was very content with my Malibu – and then my Beverly Hills – Deco Schoenhut houses, always keeping an eye open for the elusive Long Beach. That is, until I stumbled onto a dollhouse on eBay that was a twin – well almost – to my first Deco Schoenhut. 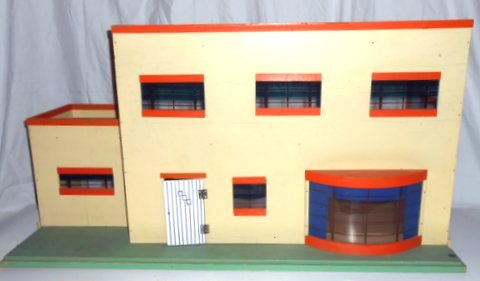 It had the same colors, same shape, same windows with painted blinds, same base, same patio, same configuration – little window by the front door, bow window at one end of the house …but wait, something was strange. It was bigger. There was an extra window on the second floor, it had no strange little chimney poking up one side of the roof, there was no awning (and apparently never had one), and most glaringly, the doors were different. Unlike the Malibu, which has a Schoenhut label in the middle of the rear base surround, this house is unmarked. 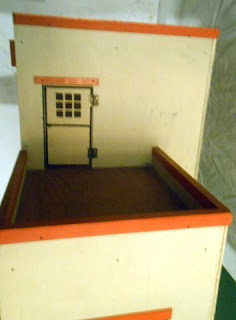 three windows instead of two


But money was low that month – for me, not an unusual event – and my dollhouse cohort, Patty Cooper, after some discussion, bought it. Out of sight, out of mind and I knew I could always get my secondhand pleasure discussing the house with Patty. Years passed and another one showed up on eBay – and yes, I snapped it up. 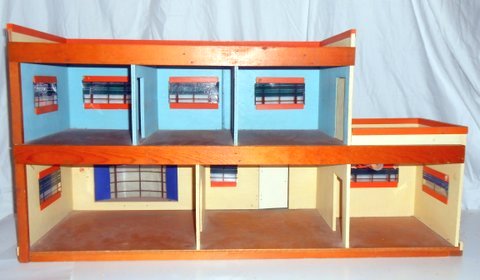 This house, too, had problems – the same problems as the other house, I might add. The “glass” was missing from most of the windows, as were about six window sills. Worse, the front door was missing. But now I had Patty's door to use as a model as it is completely different from the Malibu. A friend made all the sills, another made the “glass” and front door. The house is now restored. Well, almost. 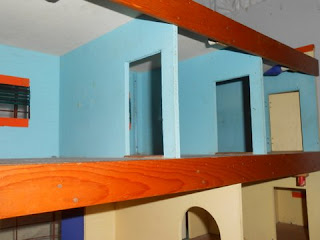 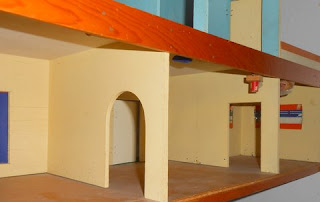 The house is electrified too – 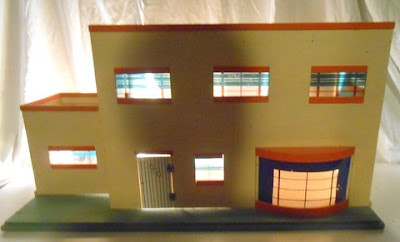 -but differently from the Malibu. The wires are tucked in the back interior of the house, hidden behind the over-hanging “borders” of each floor's ceiling and would be invisible to the viewer. 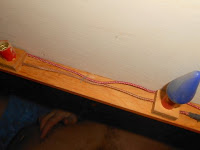 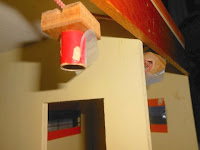 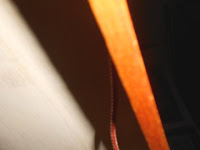 The lights – which seem original, and Patty's are the same – are colored Christmas tree lights which is strange as it would shine a different colored hue over each room. I will not try to replace the ragged wiring.


The twin house was shown in an ad put out by FAO Schwarz, a major toy store headquartered in New York City. (FYI: the flagship store on 5th Avenue is now closed.) I don't know if the ad came from a catalog, a trade publication or another source. It is called a "Modern Dollhouse."

But here's the mystery:  It seems apparent that Schoenhut made the Twin House--but maybe not. Did FAO Schwarz want a dollhouse that it could offer as an "exclusive" ("Only at FAO Schwarz!") and have Schoenhut make the house for them? Did Schoenhut take on private commissions? Or did FAO Schwarz have it copied from the Schoenhut house with just enough differences to avoid a law suit? The Art Deco dollhouse world wants to know!

I knew about the Schoenhut Malibu dollhouse from seeing pictures of it on Ebay, in my copy of a 1937 FAO Schwarz Christmas catalog,  and in Dian Zillner's American Dollhouses and Furniture From the 20th Century, page 25;   but, until talking with George, I did not realize there was a Malibu "twin house".

Patty Cooper has shared more information about the Art Deco dollhouses made  in the late 1930s and carrying the trademark Schoenhut metal tag. According to an old article in Antique Week, the 3 Art Deco dollhouses were made by a spin-off company called Schoenhut Manufacturing Co., organized by the original founder Albert Schoenhut's son Albert and grandson Frederick. They published catalogs in 1937 and 1939 that advertised "a large selection of dollhouses including most of the parent company models plus several new ones in an Art Deco International style. These 'streamlined' models featured curved windows, balconies, and flat roofs."