New toy at the home

The members of  S.A.L.(Seniors Are Liberal) group at Shady Acres Retirement Home are returning from participating in a peaceful assembly protesting what they consider their governor's war on women. They haven't felt so exuberantly political since their college days when they gathered to protest the witch hunts conducted by US Senator Joseph McCarthy, referred to by the 50s media as  the "Red Scare" and "Lavender Scare" .
They stop short when coming face to face with Nurse Ratched, standing with Babs and Herbert Walker who declined to join their group because they are staunch supporters of the gov....who is expressively not liberal.
"Guys and dolls!" says Nurse Ratched, "I'm so glad you finally returned! I have a big surprise for you!  Take a load off and I will tell you about it! "  They just hate being called guys and dolls...and being told to "take a load off". Just where did they find her? 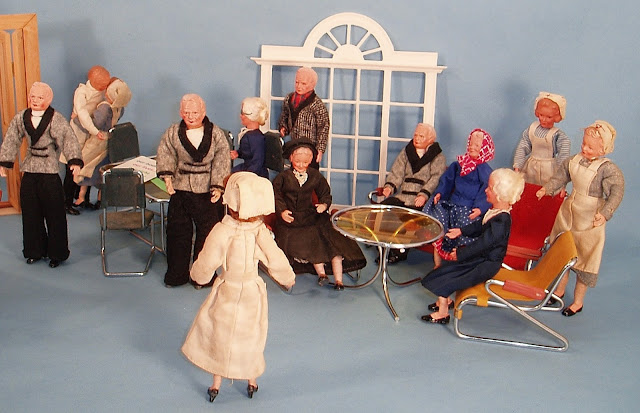 Everyone finds a place to relax as the doctor starts making his rounds. Nurse Ratched continues, "My very special friend Smitty Regoola, who owns Smitty's Used Furniture, has found a wonderful glider that matches our furniture, and  we  think  it will be a great addition to the rec room.  Gliders are wonderful for any age but especially for you young ladies and gentlemen! Smitty will be delivering it very soon!"  The women hate to be referred to as "young ladies"....but the men are pleased to be called gentlemen. Smitty is a man of many talents ....we first met him when he was selling used cars, then he turned up as a private detective, now he's in the used furniture trade! 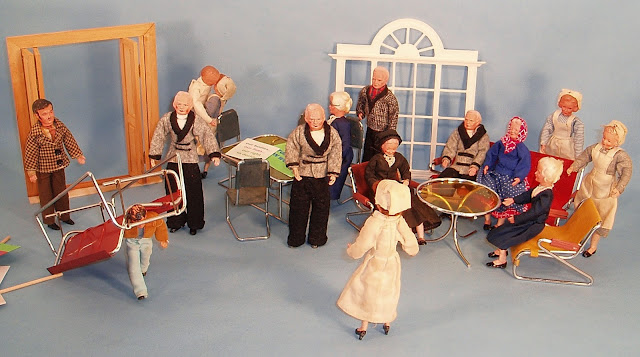 Smitty has his helper bring the glider into the room.....while he flashes a big smile at Nurse Ratched....and she flashes one back. She tells Smitty's helper to put the glider right where she is standing. 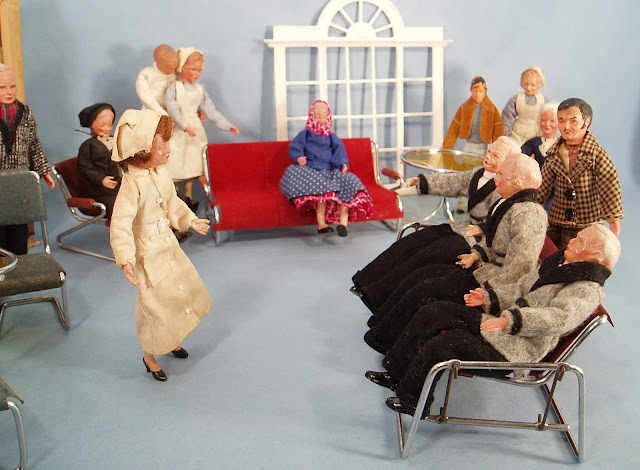 While Nurse Ratched is watching Smitty to see if he is watching her, the Pavlicek boys, triplets Peter, Paul and Marty (who still dress alike....mom would be so proud)  that we first met here , gleefully jump into the glider!  "Now boys," says Nurse Ratched, "you can't hog our new glider. Don't you think it would be nice to let the girls try it out first?"  The doctor continues to make his rounds. 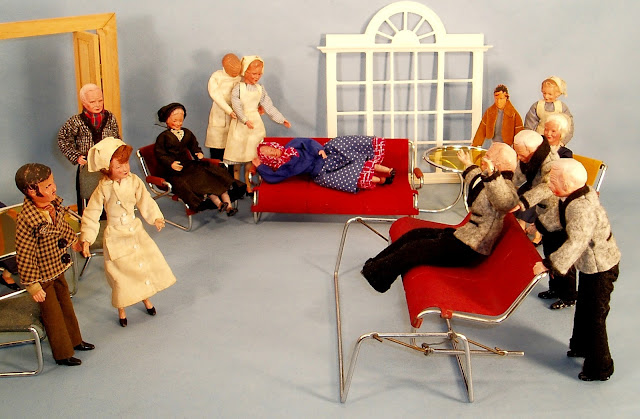 "Oh this glider is perfect," says Peter.
"We had one on our front porch when we were growing up!" says Paul.
"Let us show you our favorite trick," says Marty as he and Peter scoot around to the back of the glider. 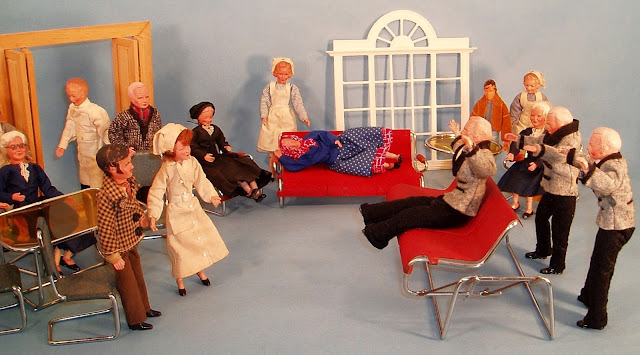 They give Paul as big a push as their 78 year old arms will let them...and as Nurse Ratched gasps...and the doctor looks for his next conquest...er consultation... 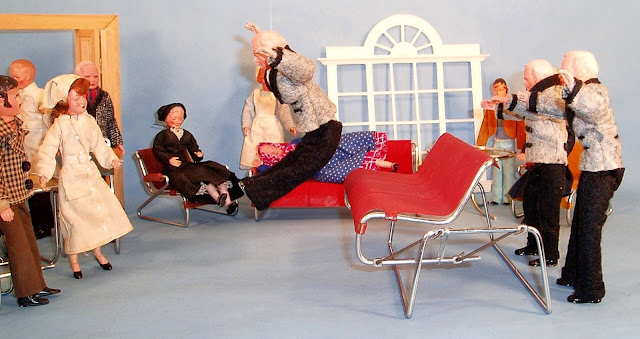 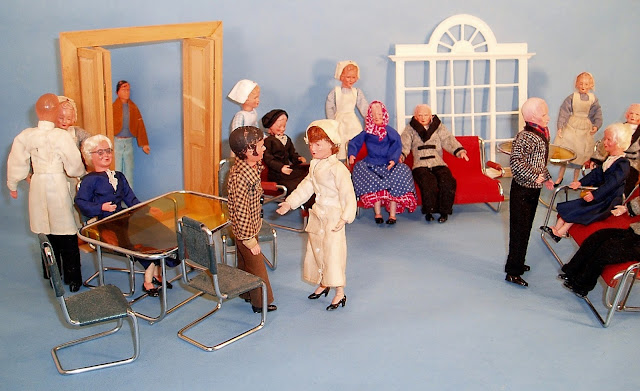 After all the excitement cools down, Nurse Ratched tells Smitty how thoughtful she thinks he is for donating the glider to her guys and dolls at Shady Acres Retirement Home. 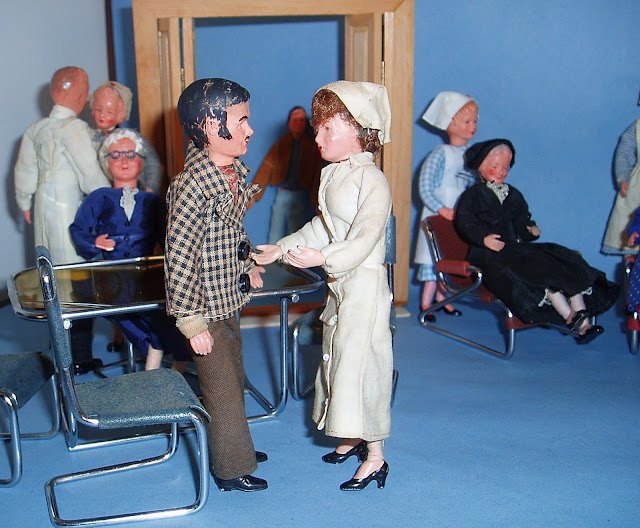 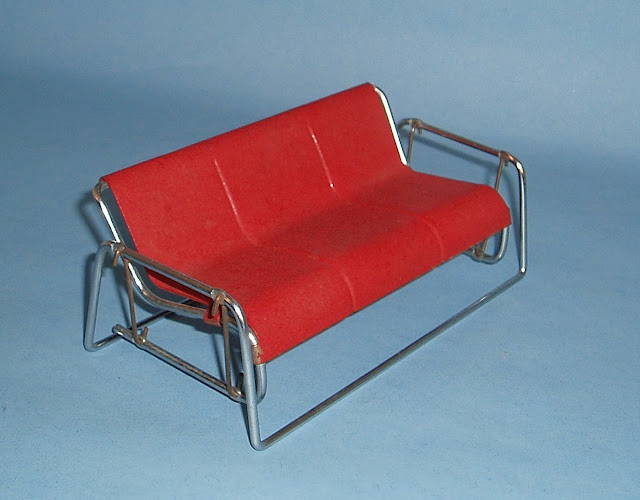 Their new glider is part of the Adda-Room series made IN THE USA by Huntington Industries of Detroit, Michigan....probably late 50s or early 60s. I found this one on ebay.
Posted by Florine at 4:44 PM