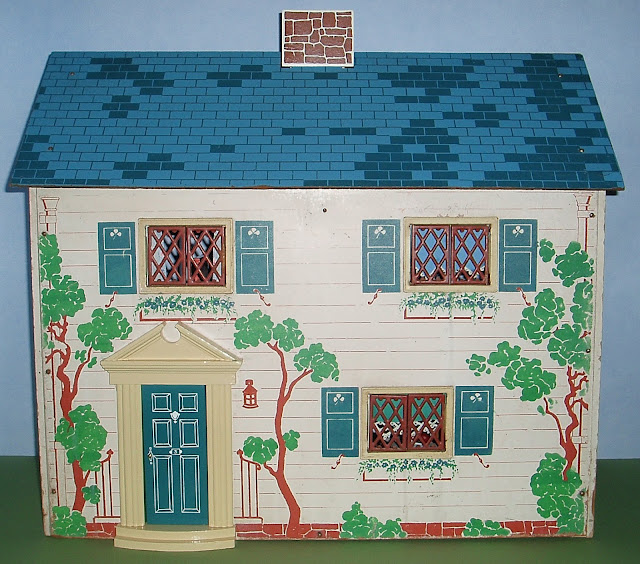 This is the retirement cottage that Doc and Grams moved into recently. This Keystone of Boston doll house is from 1947...
one of the smaller houses made in this style
with the metal shutters...but no stairs.
The front door and chimney were missing on my little house;
I took the liberty to make the door match the shutters instead of making it the original white....and also made the chimney match the metal casement windows instead of the original grey. 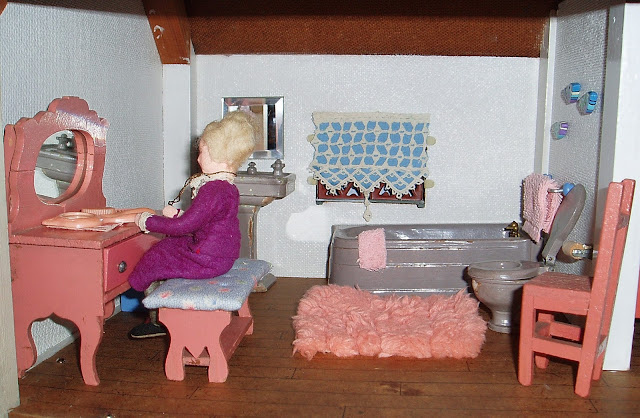 The first thing Grams does each morning after brushing her teeth
is put on lipstick.
This wonderful bathroom set looks like
the Arcade iron dollhouse furniture circa 1930...
right down to the metal faucets...but it
is made of wood and marked  Japan.
I wonder if any of the other Arcade room sets were copied. 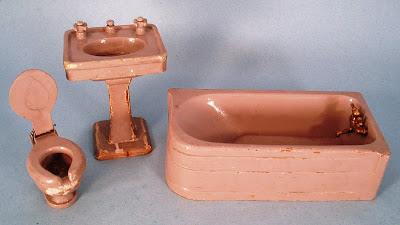 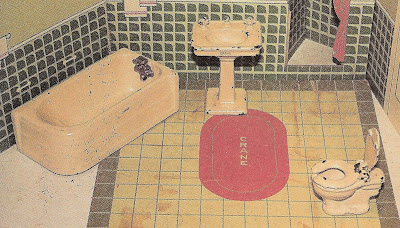 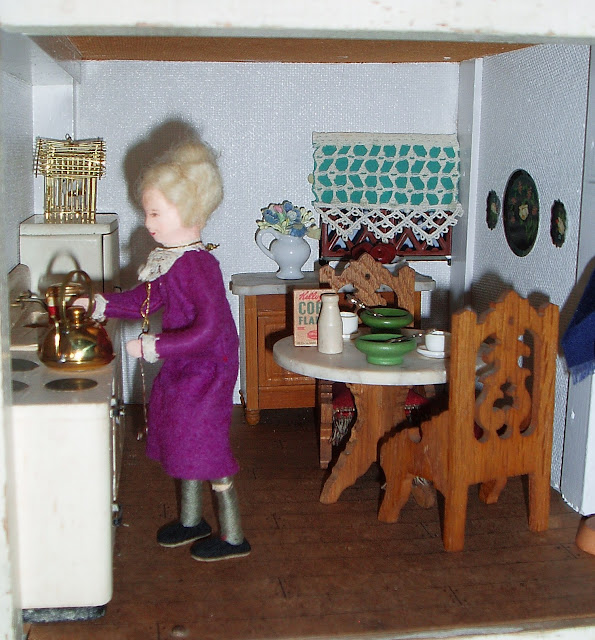 Then Grams magically appears in the kitchen (they have no stairs)
to put the kettle on for tea and to set the breakfast table.
The kitchen appliances are often attributed to Lynnfield, but I recently saw it auctioned on eBay in the original box marked "Jenny Lynd..doll house furniture of the better kind"...perhaps that was an additional brand produced by Lynnfield.
﻿ 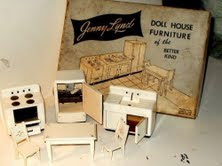 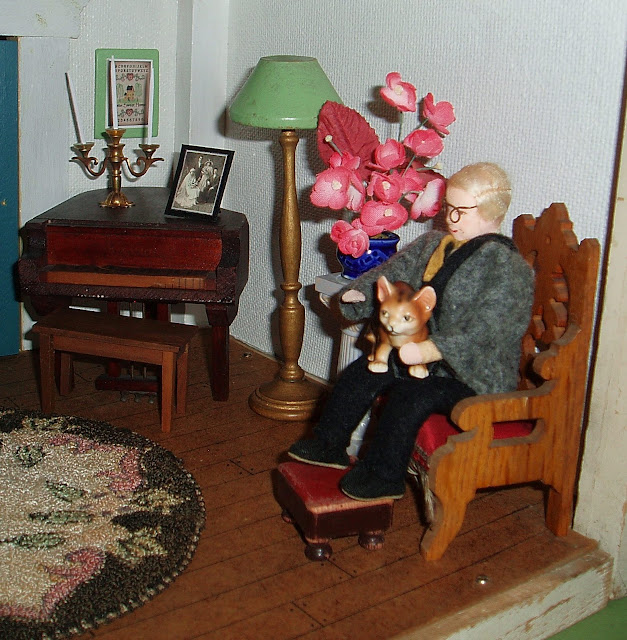 Doc and Samson apparate to the living room where Doc brushes Samson...and Samsom purrs with contentment.  Doc wishes Grams hadn't insisted on bringing her grandmother's very uncomfortable furniture to their new little cottage. The piano has Wurlitzer marked above the keyboard, but maker is unknown.
The tall lamp is a Tyke Toys piece by Menasha Woodenware Corp. 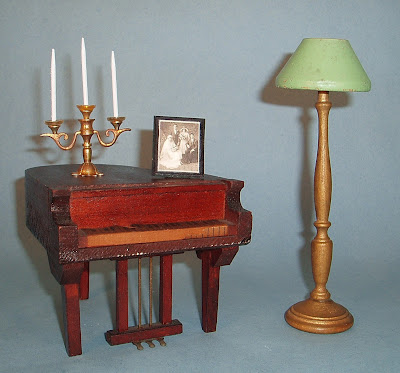 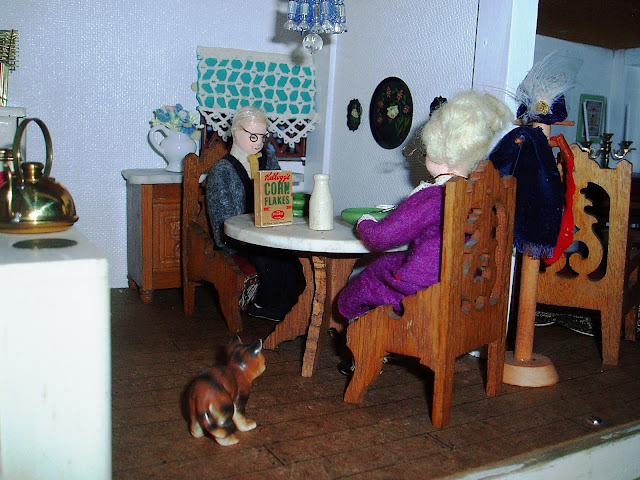 Oh Oh! Has Grams forgotten to give Samson his bowl of milk? The oak dining  set is referred to as fretwork and may be of US or European origin circa 1915. The buffet was purchased separately but matches well; both table and buffet have marble tops. 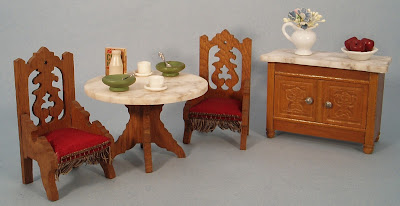 The buffet has an embossed design on the cabinet doors. 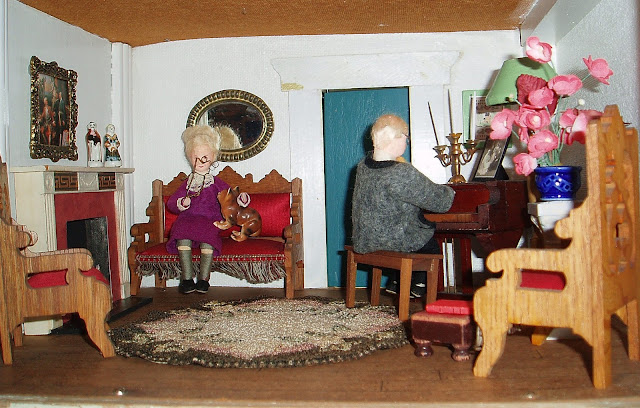 After Doc cleans up the breakfast dishes,
he plays "The Celebrated Chop Waltz" on the baby grand
while Grams relaxes on the settee with Samson. 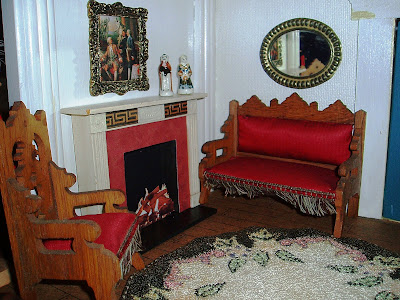 The small 1¼” figurines on the mantle
come from France and are called Fèves.
Provence tradition has them baked in an Epiphany cake " la gallette des rois" and the person who gets the figurine wears a paper crown....much like the King Cake celebrated during the ephiphany season in our southern states...especially in New Orleans. 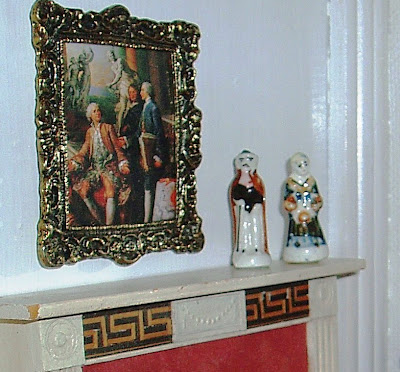 Fèves translated  is beans; originally beans were used in place of the figurines in the " la gallette des rois". I think they make excellent accessories for doll houses! I found these on eBay but one can also find them on Etsy in several places. 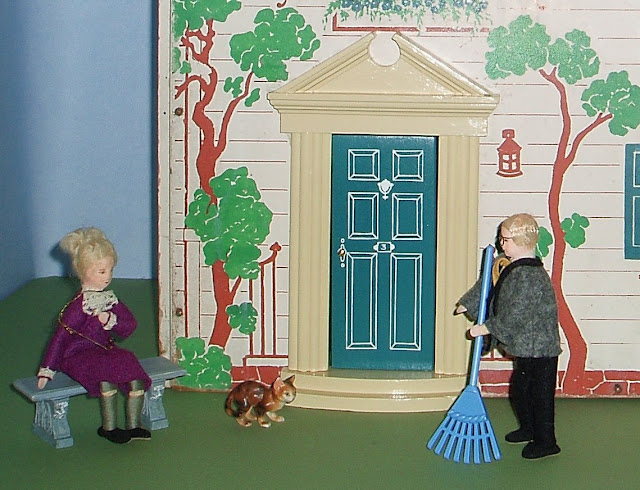 Since he retired, Doc likes to work in the yard. Grams likes to watch him work. Sometimes Doc likes to tease their cat Samson by pretending to rake him up with the leaves.
Samson is always very cautious when Doc has the rake.... 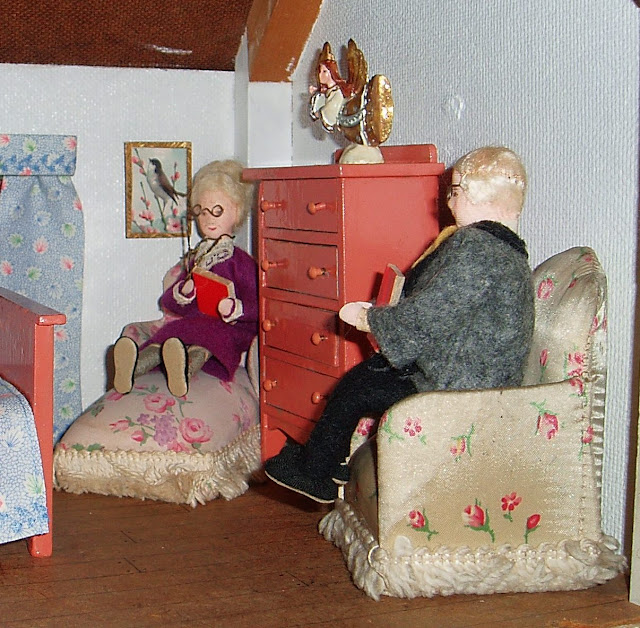 After lunch, Grams and Doc like to retire to their comfy chairs in their bedroom and read. This can also be called nap time.  The two comfy chairs are sachet pincushions made by Stuart  "for milady's  boudoir" or for a doll house and are large 1" scale.

The smaller chaise is Queen Anne by  B. Packman and shown just to compare sizes. 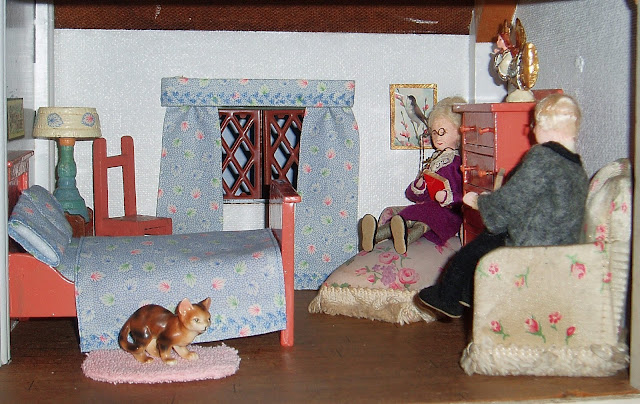 Samson settles down on the soft rug to nap
while Grams and Doc are....reading. 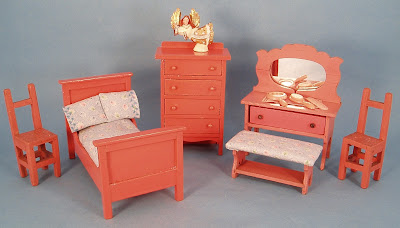 I have found several pieces from the 20-30s painted this bright
shade of salmon-pink. The bed and chest came as a set,
the 2 chairs came with a large kitchen table and are
possibly handcrafted, the vanity and bench are either Star or
German manufactured...but all a similar shade of salmon-pink. 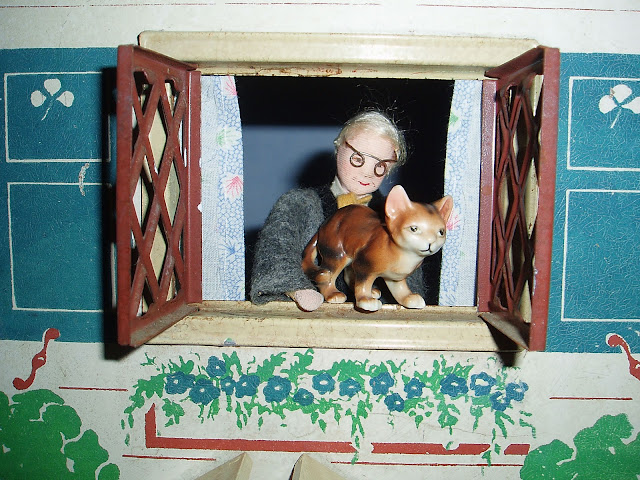 In the evening, Samson likes to sit on the open window ledge,
listen to the "night music", and pretend he is catching
crickets and other evening creatures
...Doc is always close by. 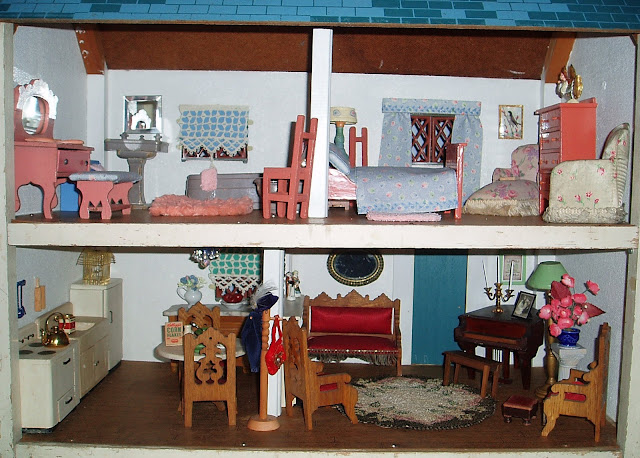